02/10/2017 UPDATE: After Jeep Grand Cherokee the time has come for Dodge Durango to receive the SRT treatment. Both of these models come from FCA Group, so it was only a matter of time when will a three-row SUV from Dodge get its SRT badge. The 2018 Dodge Durango SRT is so powerful that it has already received the moniker of ‘muscle car among SUVs.’ The title is deserved because this version of Durango is going to be the fastest one ever.

The strength of this beast will come from a 6.4-liter Hemi V-8 able to produce 475 horsepower and 470 lb-ft of torque. The power is transferred to all four wheels via an eight-speed automatic transmission. This powertrain can push the 2018 Durango SRT from 0-60 in 4.4 seconds while the quarter-mile distance is covered in 12.9 seconds. The numbers presented sound even more impressive when you take into account that this model weighs 5,510 pounds. In addition to the speed that it can easily reach, SRT Durango can also tow a lot. Official towing capacity for 2018 Dodge Durango SRT is 8,600 pounds. The performance Durango is, for an even better enjoyment of driving, equipped with seven different drive modes. Those mods are Sport, Track, Snow, Tow, Eco, Valet, and Street.

Regarding the exterior design, Durango SRT is a muscle car on SUV platform. The fascia is designed with Charger SRT in mind, and it features large air intakes up front and heat extractors in the middle of the hood. The 20-inch wheels are offered on this three-row SUV, and they are hiding powerful Brembo brakes.

On the inside, you have a new hand-made dashboard with lots of stitched details. The steering wheel is flattened, and it blends well with paddle shifters and speedometer limited to 180 mph. Between the front seats, you have a T-shaped shifter. Despite the enormous power put under the hood, this vehicle still is a family SUV, so safety standards are on high level. Some of the safety features include forward collision warnings, adaptive cruise control, blind-spot monitors with rear cross-traffic alerts, and a slew of airbags.

Price and fuel economy numbers haven’t been disclosed yet (you can read our estimations bellow in the article), but we will know more when the 2018 Dodge Durango SRT enters its production in July.

New Durango has been spotted a couple of times now in the past few months. Test mules were covered mostly in the front part of the SUV which brought out few assumptions. First one is that Dodge’s three-row SUV is going to get a redesigned, or at least facelifted front end. Another conclusion was, and we are more fond of this one, is that 2018 Dodge Durango hides something severe under the hood. If these theories are correct, it is possible that new model is going to come with an SRT badge, or even with a Hellcat one. The later option is less likely but possible nonetheless. 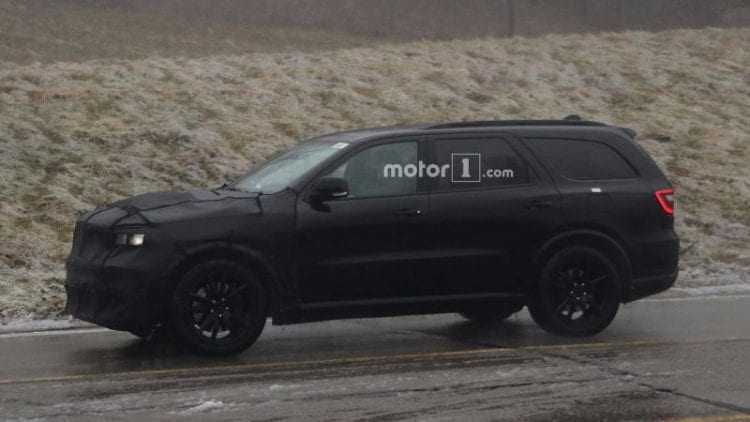 Camouflage on test mule hides something but not everything. 2018 Dodge Durango is going to be a mean machine by all standards. It looks menacing with its pitch-black color and wheel of a matching shade. Up front, the hood looks more muscular and hence the rumors about SRT power under it. The headlights are covered, so they are probably going to get a new design. Same goes for the foglights that are going to be larger than it was the case on the previous version. Another trifle that screams SRT is the larger air intake on the middle of the hood. Whatever Dodge hides in that engine bay is going to need lots of cold air.

Updates are happening on the exterior so the same can be expected on the inside. Unfortunately, no info is available at the moment regarding the interior. Changes are probably heading in the direction of making Durango inner parts worth of an SRT badge.

With all above said a Dodge Durango SRT could be considered a certainty by some degree. That leaves us able to talk about engine options for an either SRT or even a Hellcat, why not? In a case of an SRT model, Durango will feature a 6.4-litre V-8 which is available on entire SRT lineup. This unit is capable of producing 475 hp. With this kind of figures, this powertrain is an upgrade compared to Durango’s current most powerful mill which is a 5.7-litre V-8 with 360 hp.

Another scenario where we have a Hellcat Durango on our hands, the story goes as following. The unit under this hellish three-row SUV would be a 6.2-liter supercharged V8 with, listen carefully, a 707 horsepower output. As far as transmission goes, the SRT version would have automatic only, but a gearbox is hard to determine right now. With this kind of power 2018 Dodge Durango will probably have bigger and stronger brakes (Brembo) and more refined suspension.

The new model is most likely going to be presented at upcoming New York International Auto Show with a full release coming in the summer months.

Current MSRP for ongoing vehicle stands at $29,900, and it should remain the same for a base model. Possible introduction of SRT or even Hellcat option would bring a rise in price. We can’t determine just how much will new 2018 Durango SRT cost, but with power that it brings every dollar is worth it.