Equinox was the first crossover for Chevrolet when introduced in 2005. A Little bit more than just badge engineering was done by Pontiac and Torrent was launched. Equinox entered the second generation in 2009, while Torrent couldn’t follow up as Pontiac went to history. GMC came to play and offered Terrain which was essentially the second generation of Chevy’s mid-size crossover. Our Equinox received refresh just this year, but nevertheless, new 2018 Chevrolet Equinox is on the way as a bearer of the third generation.

New generation come after heavy diet as it lost 400 pounds, half of it, is thanks to the improved efficiency of the structure as a result of usage of high-strength steel and a dramatic increase in the number of welds and structural adhesives employed. Sadly other half is thanks to shrinkage in the dimensions as it is shorter by 4.7 inches, which necessarily made wheelbase shorter by 5.2 inches and height drop by 0.9 inches. The only part where we have more is the width as it goes up by 0.1 inches.

Bad side would also be headroom space that is decreased by under an inch front and rear, legroom is down a few tenths of an inch, and happily front shoulder room expands by 1.4 inches. One of the few good novelties would be the fact that new shape drops the drag coefficient to 0.338. 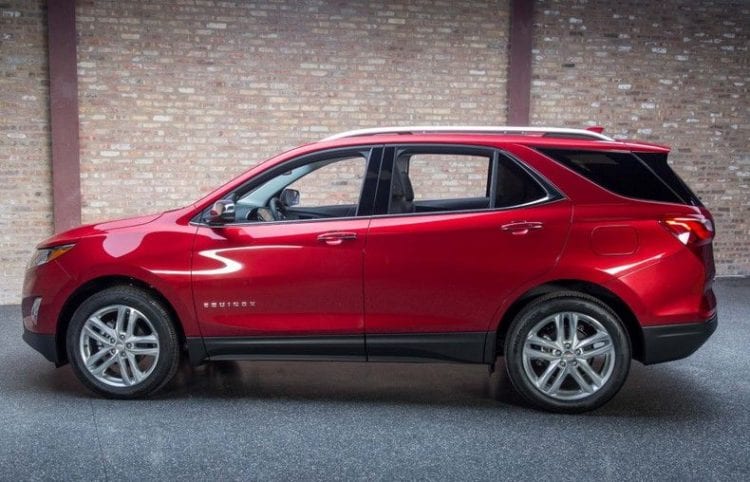 The first generation of Equinox had curious styling as horizontal chrome line from grille pierced deep through the headlights, and the second generation didn’t follow its footsteps. Neither will third. It looks good, as the grille is full of chrome, there is an interesting chromed line at the side windows and D pillar is merged with rear windshield, although that just carried on from the previous generation. It appeals to many buyers, but it is not a game changer, and it is far from distinctive. Chevy played the safe card here.

If facts about new cabin space disappointed you, other things about it won’t. Compared to the older one, new interior looks modern and complex, far better than the unimaginative one of the predecessor. There will be still places with cheaper plastic, mostly close to the bottom, but more quality materials are evident and flowing, and oblique lines instead of dull sharpness took place. It is definitely a step forward.

There are a few positive changes here. The whole previous line up was erased, and Chevy started from scratch. So, there are no 2.4-liter and 3.6-liter units from past as downsizing took its toll and turbo made the scene. The new base engine is 1.5-liter turbo petrol with 170 hp and 203 lb-ft, and that’s 12 less than naturally aspired 2.4, but it has 31 lb-ft more and surely fuel efficiency will benefit too.

Next one would be new 1.6-liter, but why not skip to the new top of the line 2.0-liter, again turbocharged, producing 252 hp and 260 lb-ft. It is here to replace old V6, from whom it has decreased by 19 hp and 12 lb-ft, but it is paired to nine-speed automatic with a wider gear ratio spread (7.6 versus 6.1), not with six-speed from before. Also, have in mind that this is 400 pounds lighter vehicle than before, so the slightly lower hp number will not decrease performances. Towing capacity of 3,500 pounds is unchanged, and it is significantly less thirsty as Chevy promise highway fuel economy of 28 mpg, quite a rise from V6’s 24 mpg.

2018 Chevrolet Equinox made nothing extraordinary about itself. It is full of compromises as there are less weight and new modern engines, but with smaller dimensions and less power. It is like that new changes have been thought out to the middle of the way, and we are left without a clear decision, and it seems that Chevy needs another generation to make them complete. In the meantime, it will continue to play on its price tag card of $24,000 which is cheaper than many rivals.