Corvette is a legend. Go from C1 to C7 and this statement stands. The last generation was introduced in 2013 with three years of delay, as C6 ruled the factory lines for nine years. But forced anticipation paid off as new design direction and dismiss of cheap plastic took place. After regular model, hotter versions soon followed like Z06 and race-spec R, but everyone was astonished as “crème de la crème” ZR1 wasn’t mentioned, so the anticipation rose. Then at one point GM announced that quickest Corvette is not going to happen, and everybody turned their gaze to upcoming mid-engined Zora. It will be hard to trust GM statements anymore as what seems to be masked 2018 Chevrolet Corvette ZR1 is roaming on the roads around us. 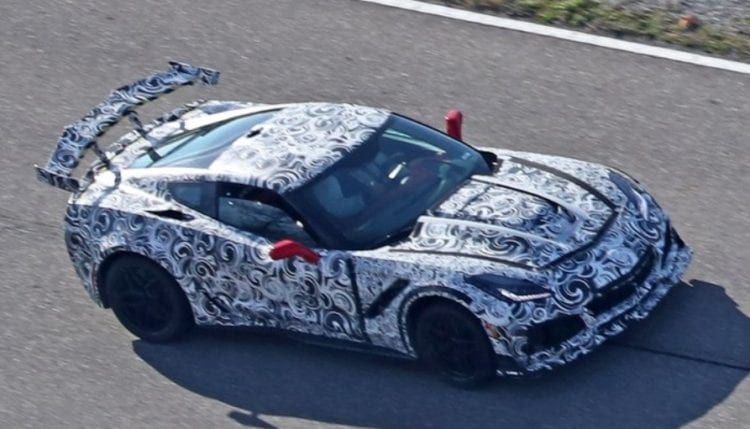 Camouflage is good, but there are enough clues to convince us it’s ZR1 underneath. Take larger vents at the front for example, as they are needed to supply intercoolers, because pumped up V8 is going to settle under the hood. Then we go to the larger hood bump and finally massive rear wing.

If we stay at wing story, spy shots show two versions, one with a huge spoiler and other with a slightly smaller one, so probably two different aerodynamic packages are going to be offered. For the end, feel free to spot blue brake calipers at the back which is undeniable ZR1 trademark.

There are no spy shots of it yet, but you shouldn’t expect many changes from regular Vette. Assume some novelties here and there will be offered, like special carbon-fiber trim, new upholstery options, and ZR1 badges.

Why? Because Z06 version cranks out 650 hp and previous ZR1 came with 638 hp. So expect the earth to move as at least 700 hp is on the future menu. And this is not Charger’s Hellcat, it’s a coupe, which means less weight and more maneuverability. We expect it to hit 60 mph in 2.8 seconds, which was Veyron’s territory. Top speed should be around 205 mph.

It will be pricey for Corvette lineup, but for everything else, it will be a bargain. As Z06 is almost $80,000, we expect this hotty to be priced at $120,000. To understand why this a bargain, we have to take a look at the competition and their price tags.

So, Porsche 911 Turbo is $160,000 while Turbo S is almost $30,000 more and offering significant lack of power compared to Vette, although there is no lack of acceleration time. If we further expand our budget, we will get to Ferrari GTB that offers also less power but for a double price tag.

You may consider us delusional comparing Corvette to Ferrari, some would say Porsche also, as premium materials, build quality, features and most of all premium badge don’t go along with our 2018 Chevrolet Corvette ZR1. We tend to agree to some extent, but if you really are a car enthusiast, and you’re looking for a sports car, nothing matters more than numbers. Each decimal makes the difference, and this special Vette is offering many of them. Hypercar figures with a clearance sales price tag. What more could anybody want?