We live in an extremely exciting time: we have so many things that help us live better and comfortable lives. In terms of cars, we have seen so many fantastic vehicles these years that made our jaws drop and excitement feelings run high. However, regardless of how many cars we reviewed, one still was different because it had the greatest performance in the history of the modern auto industry. Undoubtedly, we mean Bugatti Veyron. The manufacturing of this marvel began 11 years ago, and it did not even have competitors because it was the fastest legal production vehicle on the planet. For example, one of the Veyron’s versions, Super Sport, reached a little bit more than 257 miles per hour in 2010, which allowed it to be included in the Guinness World Record Book. This record has not been beaten yet, but it seems that it won’t be long before the new marvel from Bugatti comes to push it further.

Of course, we are talking about Chiron, next generation supercar from Bugatti, which is something we have never seen before. The manufacturer claims it will be the most exclusive, most luxurious, most powerful, and fastest super sports car in the world. Well, they clearly have a point there because the previous vehicle that had to be beaten, Veyron, was powered by 1,184 horsepower W18 beast that did not have a speed limiter. It was also stated that the model was named after a famous Louis Chiron, who was a Bugatti’s factory driver in the early 1930s. The company had previously named one of its concepts cars after him in 1999, and finally, the name has made its way to the production version. 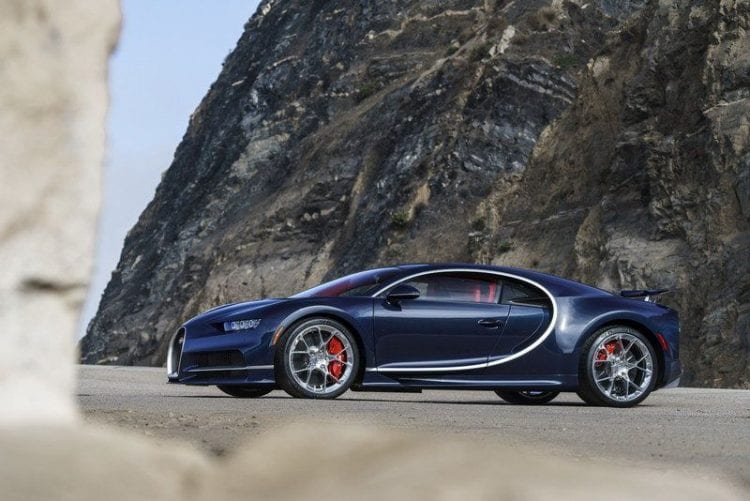 When the curtain fell from the Chiron at this year’s Geneva Auto Show, we have been amazed by how the design of Veyron was advanced. The overall language, however, was clearly designed around the predecessor’s great looks that made it iconic in the supercar segment. Although some reviewers found this decision frustrating, it can be explained by the fact that the automaker probably intends to maintain the current customer base that likes the design. Since Bugatti sold 450 units of Veyron over 10 years of production at unprecedented prices, it is safe to assume that the customer base is there and expanding.

Let’s get back to the exterior. Even though it may seem that the changes made in Chiron are insignificant and Veyron’s legacy is too apparent, a closer look proves otherwise. The designers have provided a number of new design elements that differentiate Chiron from the predecessor, including different LED headlights, the new shape of the front hood that no longer extends into the bumper, lower and slimmer air intakes, and revised apron. These changes make the vehicle look much more aggressive. 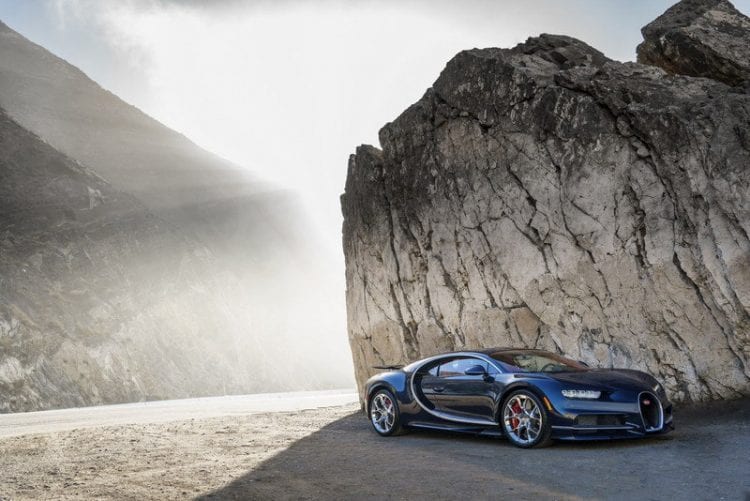 The side also is different from Veyron. Unlike the predecessor, the new model features a C-shaped curve that defines its profile, making a considerable departure from the previous design language. The automaker has decided to keep the Bugatti Line, though: it acts as an aerodynamic element by redirecting and optimizing the air flow into the side intakes.

As for the back, the vehicle received a twin-pipe exhaust instead of the predecessor’s massive centered outlet and large diffuser with a strip featuring numerous LED lamps. The engine hood was redesigned as well to provide improved aerodynamic design and performances. Overall, the vehicle aerodynamic features make the rear look massive and ready to hit some serious speeds. 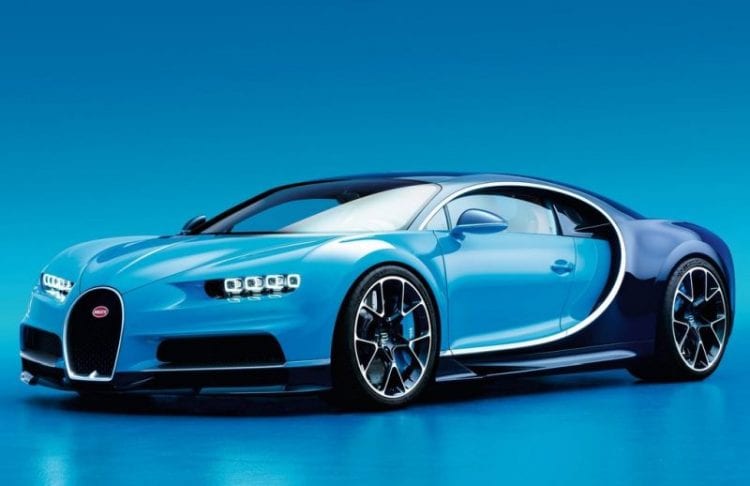 Having viewed the photos of the cabin, one thing quickly comes to mind. It’s a masterpiece. The design of the interior showed that the automaker has done a marvelous job in balancing a sporty character and luxury. You won’t find any cheap materials like plastic there; everything is made from high-quality, premium stuff like aluminum, carbon-fiber, and leather. Every single panel and button were redesigned to make them different from Veyron. Moreover, the center stack is also different and reminded us about the Gran Turismo Concept vehicle.

The steering wheel, of course, has a flat bottom and blue buttons, while the seats are as comfortable as it gets. The passengers will enjoy the smooth ride without noise, as the cabin was thoroughly protected by the sound deadening materials. A premium sound system will also keep the passengers entertained; it even has a one-carat diamond membrane on each of the four speakers around the cabin. That’s unprecedented! The customers of Chiron will be glad to hear that there is about 12 mm improvement in the headroom, which allows taking it for a real spin and wear a protection helmet. Well, at the race track, one will certainly need it. 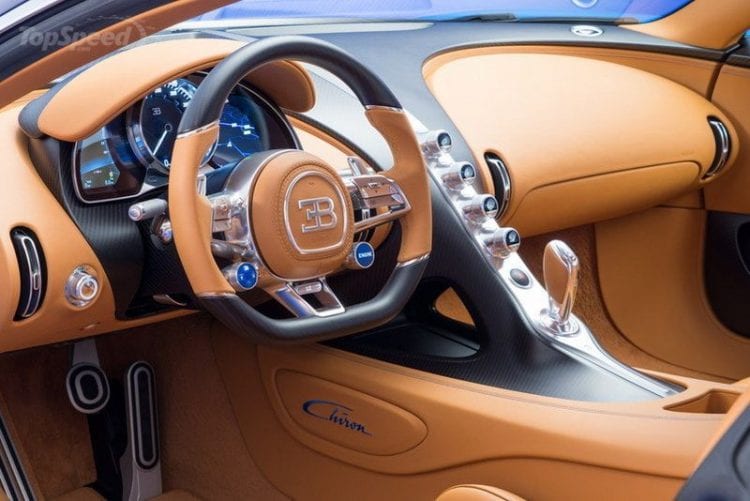 The fact that Veyron and Koenigsegg One:1 are no longer the fastest cars is certainly exciting. Fortunately, things change, so do the Bugatti’s engines, that become even more powerful; under the hood of Chiron, there is the same 8.0-liter W16 beast that now generates 1,479 horsepower and 1,180 lb-ft of torque thankfully to few upgrades. This engine allows reaching 60 miles per hour in just 2.5 seconds, while 0 to 185 mph will be done in under 13.5 seconds. Talk about a fast ride, huh?

Bugatti still had to limit the top speed to 261 miles per hour because of the legal requirements for safe road travel. Without the limiter, the vehicle should reach above 270 mph, easily. To show just how powerful Chiron is, let’s recall Lamborgini Centenario, another great and fast, super car. Well, it needs ten seconds more to reach 185 miles per hour mark, which makes it much slower than Chiron. 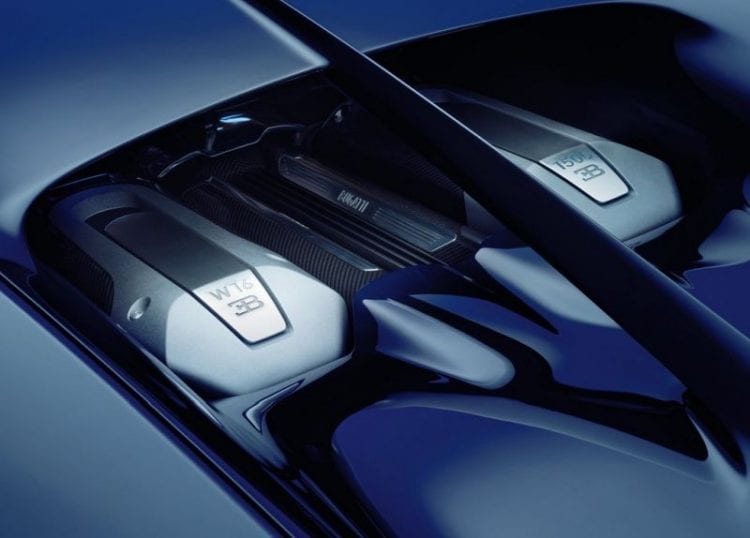 According to the manufacturer, the starting price of Chiron is $2.61 million as of July 2016. This price does not include any optional equipment and customization, which will take it higher, but we have no details about that. At this point, at least 150 units of Chiron has been already preordered, because the automaker has claimed about taking order for one-third of the entire planned production volume.