BMW made a breakthrough with offering SUV with coupe-styled rear, as X6 entered production in 2007. We already mentioned before that it wasn’t actually first as SsangYong did it with Actyon two years earlier, but since nobody knows who that is, X6 is praised as a founder. X6 is in its second generation, X3 got its own smaller X6, respectively X4, and the only guy that we are left with is X1. So X1 is going to receive its coupe treatment, and 2018 BMW X2 should be it. Concept X2 was shown at recent Paris Motor Show in September and as it usually happens some rumors are surrounding it.

The new vehicle was tested in the snow, and our spy camera was there to capture it, so if you liked what you saw at the 2016 Paris show, you will love these photos. Unlike the previous prototypes, this car featured less camouflage especially around the greenhouse and the front fascia. In addition, BMW decided to try out the new production taillights. Comparing it to the X1, the hood of the vehicle has a lower and sharper point. Combined with the hood, the headlights contribute to the raw, angry looking front of the car. Unlike on other BMW models, the twin kidneys of the grille are wider at the bottom, and the vehicle does not feature massive air intakes in the bumper. When it comes to the roofline and windows, they also received changes. Just like it was expected, the roof is positioned a little bit lower, and the windshield contributes to the smoother look of the car. If we examine it more thoroughly, we would see that the Hofmeister kink is a bit different than on previous prototypes with glass forming a different angle earlier in the beltline. Last but not least, the lack of camouflage shows the production taillights which appear to be slimmer and more mean-looking than on the X1 which makes the whole tail look wider and shorter.

The production version is expected to be unveiled as a 2018 model and will most likely share the platform with the X1 along with its turbocharged four-cylinder engine. The new X2 is already seemingly sportier, so BMW might choose to put a more powerful version of the X1 unit into the new 2018 BMW X2.

Rumor has it, that design is not going to change much from the concept. That would be the turning point for BMW, which had received critics about the lack of boldness in the post-Bangle era. There is nothing wrong about current BMW lineup, but we are missing amazement left out in mentioned period. New X2 is not going to be that radical, but it is different style path for sure, and German car maker needs it. X6 is X5 with a handsome rear end, X4 is X3 with X6 behind, and X2 is not going to be X1 with X6 back segment again, although everybody would expect that. 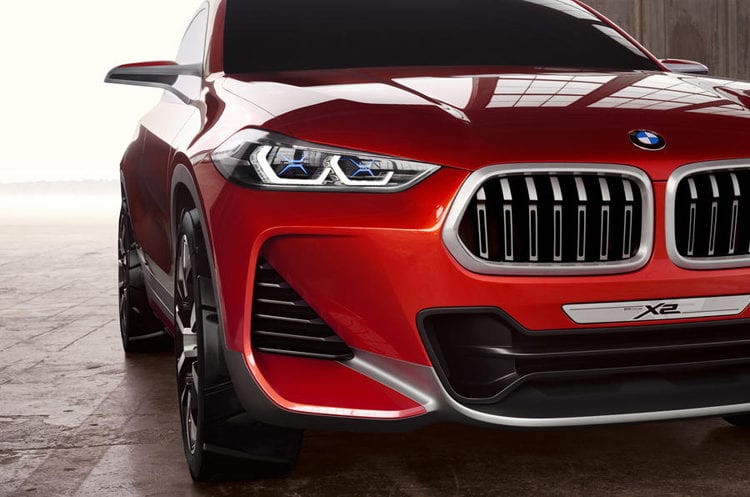 This is going to be a special one, especially because it is possible that it is representing future BMW styling cues. Concept said a lot and spy photos confirmed that front lights are going to be slimmer than X1’s, it will feature revised bumper, and the rear is not going to be usual copy paste from bigger siblings. It will be distinctive, as X6 and X4 are almost identical to their donors with front fascias, and although back side is going to lose some of harshly sloping roof appeal, it will offer more headroom for sure, and taillights are going to be unique in brand’s lineup.

Something has to be taken from X1, and that would be the cabin. We should expect unchanged interior, but at this point, nobody can confirm anything for sure, as a concept came with blacked out windows and there are no spy photos of what we will be getting inside. Anyway, X1 interior is just fine, with quality materials and glorious fit and finish. 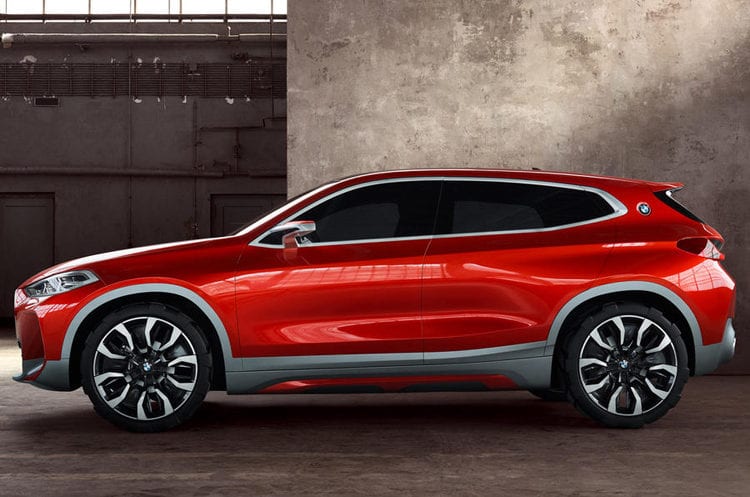 Another thing that would not stray from X1, so expect a familiar line-up of petrol and diesel engines, all turbocharged and with four cylinders. It will use UKL2 platform that also underpins the 2 Series, so base models would be front-wheel driven, while 4×4 xDrive will be offered with upper trims. We could all expect top of the mountain M badge to appear in the future, probably with 2.0-litre petrol engine, and M25i badge.

Design boss Adrian van Hooydonk sad that X2 is developed as a vehicle that “combines enjoyment with practicality,” and Head of Design Karim Habib pointed out that the car “combines the fast-moving body language and low-slung proportions of a coupe with the robust construction of an X model.” Whether you agree or not, 2018 BMW X2 is definitely different than just joined parts of different BMW models. While Mercedes is on the way to take its crown in sales figures among premium brands, BMW needs a new approach. Some may not like X2’s roofline compared to X4‘s and X6’s, stating that it is not declining enough, but one thing remains certain, German carmaker changed some plans and fresh thinking should be welcomed and worthy of waiting for.