Munich ventured into the unknown waters in 2013 when i3 was introduced. It was the first vehicle of the “i” sub brand, and it was followed a year later by i8 model. So, i3 was the first mass-produced zero-emission car for BMW at that time, while now refreshed and masked 2018 BMW i3 can be seen testing on the public roads.

When i3 was unveiled it was pricier than most rivals, it was BMW in the end, but the 80-mile range could hardly be considered good. In 2016 battery was improved and the range was pushed to 144 miles, which was significantly better, but things are moving fast in that area not allowing the companies to rest for a second. Hyundai Ioniq and VW e-Golf both has 124 miles of range, while Chevy Bolt went berserk with 238 miles. 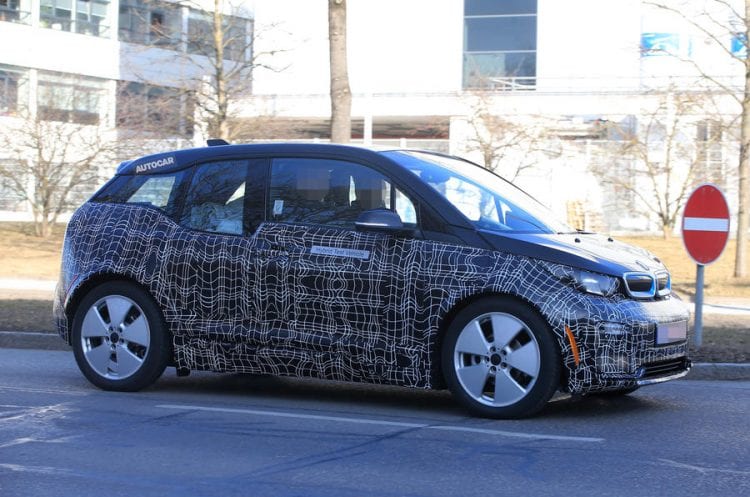 Rumor has it that new Nissan Leaf is going to feature the same figure, so i3 has to boost its performance in that field to stay competitive. BMW already offers range extender featured in petrol engine taken from one of the scooters from its Motorrad division which increase the range to 180 miles, so refresh should break the 200 miles boundary.

I3 is already highly futuristic, and a lot more time has to pass before it could look like it needs any facelift. Beemer hasn’t taken that as an excuse, and we see that masked model carry new head lights and fog lights. Hood and grille are not hidden, so they’ll remain the same and similar goes for unmasked tail lights. On another hand, both front and rear bumper are going to experience some slight changes obviously as they are meticulously covered. On the inside, the infotainment system must introduce updates, while possibly dash will see some styling revisions along that.

Currently, i3 is powered by electric motor, mounted at the rear and delivering 170 hp and 184 lb-ft, which is enough to get this EV to 60 mph in 7.2 seconds. If we put aside overly expensive Tesla Model S and Model X, only new Chevy Bolt gives better acceleration time, so for EV, i3 is quite potent. That is for EV, but not for BMW. So, the brand is preparing the first delicacy in the world of electrified hatches and that would be the i3S model. It is supposed to be the first hot hatch powered by electricity and the one that will actually bring BMW driving experience as regular version failed to do so.

In that manner, the suspension is due to be retuned and the electric motor should offer better figures. Although don’t expect something in the area of brand’s own M140i, also not something as Focus RS or Golf R, not even in the range of Focus ST or Golf GTI. Take it something closer to Hyundai Elantra Sport as it is about to deliver around 200 hp. So, it is far from special, heavily meek for Beemer, but it will open the game and future will inevitably bring better figures.

Both revised 2018 BMW i3 and first hot hatch EV i3S are going to debut during Frankfurt Motor Show in the September this year. Price is probably going to stay around current $42,000 in the US, while i3S is about to be the priciest i3 so far, how much precisely, we don’t know yet. If you nag about only 200 hp from future first spicy hatchback EV, take a look again at the price tag of the base model, think about how much will S letter add to that, and imagine now how much would 340 hp version cost and whether you would take it, as it could be easy M4’s kind of money.