Most daring Audi product from late 90’s maybe lost some visual quirkiness over time, but it has grown to properly behaving sports car. The first generation got the looks, second came with decent cornering, while third has it all. For the first time, it’s a complete package, one that looks and drives good at the same time. Europe had the chance last year to put its hands on TT’s top iteration, while US was still at S moniker. Well, that is changing as 2018 Audi TT RS is about to arrive at the US shores this spring.

DO YOU NEED RS?

You are maybe wondering whether somebody needs that R letter boosting the price by 50%. Well, they do, because it gets you 100 hp more, lower stance, optional carbon-ceramic rotors, specially tuned magnetorheological dampers, OLED lights, Virtual Cockpit with RS display, impressively mean appearance and quite a few things more. But let’s go step by step. 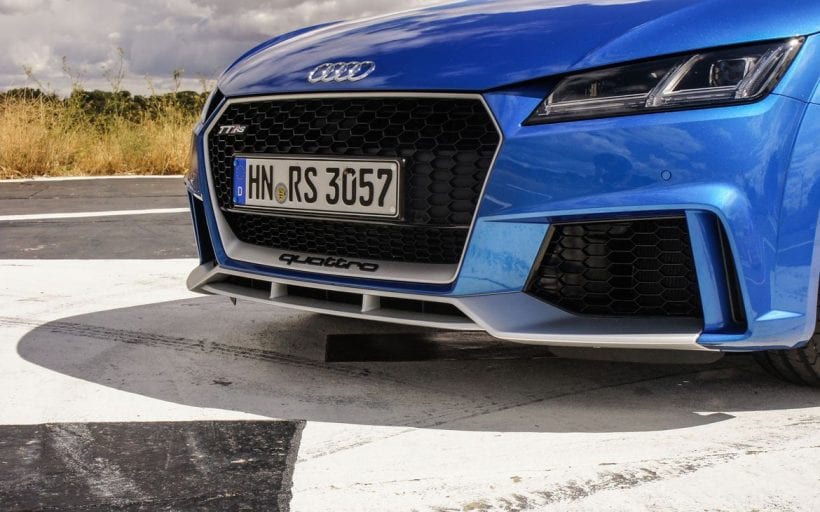 An extra dose of visual aggression that you get with TTS model is not by far enough to satisfy sporty appetites. There comes RS to set things straight and diminish any usual Ingolstadt’s styling restraint. Grille is black and meshed in honeycomb pattern along with side intakes, which are also incredibly more menacing. Add to that silver theme (or other themes that you choose) which besides mirrors, also covers grille frame and lowest part of the bumper and you’ll get an angry sharp face threatening to bite you.

At the rear sits nicely proportioned wing and oversized double exhaust outlets instead of smaller quad ones from S model. German sharpness and emotionless are a perfect recipe in this case, as TT RS is arguably one of the best-looking things in its class.

The cabin is just perfect. This generation brought sporty oriented interior inspired by R8. We have a minimal amount of button-knob things, while the dash is dominated by beautifully crafted air vents and flat-bottomed steering wheel from which you can control everything and totally ignore dashboard buttons.

The driving position is racing inspired and diamond stitched seats are breathtaking. Add to that Alcantara, carbon inserts, contrast stitching, now mix that with the sublime build quality and materials and you got yourself an award winning interior.

The German carmaker has a special relation with five-cylinder engines and with new RS that doesn’t change. We still have a 2.5-liter turbocharged I5 petrol engine, but instead of cast iron block, it is made of aluminum with magnesium oil pan, which together shaved 57 pounds. The engine delivers 400 hp, 40 hp more than before, and 354 lb-ft of torque with powerband as wide as it can get with one turbo, respectively from 1,700 to 5,850 rpm.

Run to 60 mph is done in just 3.6 seconds, roadster, which is not coming to the US, takes two-tenths more, while top speed could be 155 or 174 mph if you opt for that. All shifts are performed by 7-speed dual clutch automatic, manual sadly is not offered, and RS now comes with lunch control. AWD Quattro can send as much as 100 percent to rear wheels, giving you proper sports car feel and allowing easy drift, while ESP could be turned off completely. 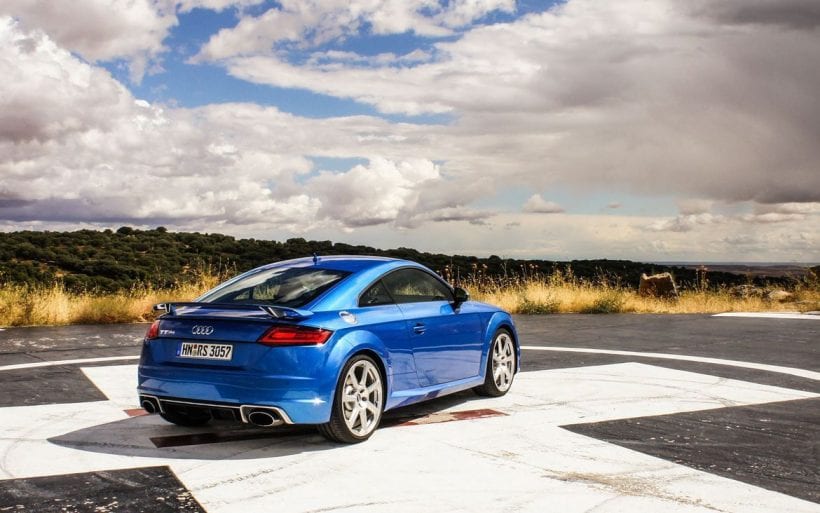 We have other sports coupes that will make better lap times, but 2018 Audi TT RS has plenty to brag about. Distinctive sharp and mean looks, most refined cabin in its class and even serious cornering capability, to name the few.

Germans have put a lot of effort in providing the last one over the time, trying to overcome silly engine positioning causing endless oversteer while going as far to tune Quattro to mimic RWD and allow some side fun. As we said, you have a lot to chose for $66k, many things are way faster, but as a complete package, nobody could deny its special appeal.