The rivalry between Germanic premium hot divisions has been open and brutal for years. By each new model M, RS and AMG have waged war with power figures, always offering more and more. But then you may ask yourself, where is the limit for front-wheel drive hot hatches. There must be some limit when that front axle just couldn’t bare all that power anymore. All predictions from past are already broken, and Audi has raised the bar above the sky with 2018 Audi RS3 Sportback.

First, we have to make clear that BMW M division does not offer FWD hot hatch. 1 Series is rear-wheel driven, and only 2 Series has an M outfit. Next generation is going to transfer to FWD, infuriating many, and maybe hatch shape will house some spicy things under the hood then. In 2013 Mercedes revealed A 45 AMG which managed to pump out 360 hp from a just 2.0-liter engine and all that was stuffed into the compact body. That was twenty more from RS3 and 1 Series M.

The game was obviously not over yet, RS3 top that by 7 hp in 2014, M2 then raised the bar by the additional 3 hp year later, then Merc retaliated in the same year with facelift adding 10 hp to the whole sum. Finally last year RS3 in sedan shape made a huge leap to 400 hp, and the same thing is under the hood of our just revealed hatch. You see, that same figure was powering Ferrari 360 Modena just slightly above a decade ago. 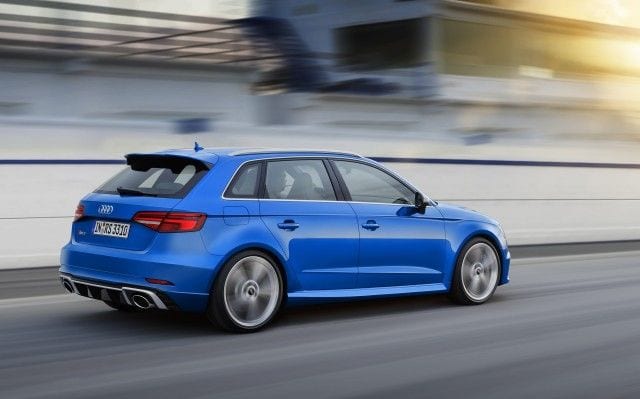 Certainly. As we know from the previously revealed sedan, 2.5-liter I5 jumped from 362 hp and 343 lb-ft to astonishing 400 horsepower and 354 pound-feet of torque. That is mixed with AWD and 7-speed dual clutch transmission, allowing great acceleration time of 4.1 seconds and limited top speed of 155 mph. If you hunger for speed doesn’t end there, you can remove limiter and push it to 174 mph.

All that glory doesn’t stop there, as the car is 57 pounds lighter mostly thanks to the new aluminum crankcase, there is an active exhaust system, adaptive dampers, carbon-ceramic brakes and widened track, among else.

WHAT ABOUT THE LOOKS?

There are some tweaks here too. First are the headlights, now in line with a refresh of the regular version, and that goes along with tweaked and more aggressive front bumper, new more angular grille and new configuration of tail lights. The previous model looked sharp, but this one is even sharper, and it fits nicely with its nature.

Cabin got some neat touches also, as Nappa leather is standard now, while flat-bottomed steering wheel, aluminum pedals, and beautiful bucket seats remained. There is plenty of RS logos around the place and special RS mode for virtual cockpit displaying information about g-forces, torque and tire pressure.

If you are up for hot hatch and you wish to be the meanest guy on the block, then the 2018 Audi RS3 Sportback must be it. It is topping Merc by remarkable 20 hp, Beemer by 30 hp, Focus RS by 50 hp and others are not even worth of mentioning. If you are in the US, you have to settle with sedan version as this thing will not sail, but we wouldn’t see you mourning about it, as we have same happenings under the hood.

If you have around £40,000 ($50k), this is the thing that you want, and better hurry as Munich and Stuttgart have not fallen asleep, and who knows how long will this thing reign.