We wrote about new Audi RS3 in its hatchback variant. If you were with us, then you already know that game of power figures between German trio is heating up more than ever. Audi managed to climb on top reaching a glorious 400 mark, the only question is, how long is it going to remain there. But there is more by Ingolstadt as you can have same horsepower number joined by the decent boot.

Plus, when sedan version was introduced in 2013, many speculated that it is the most beautiful sedan in brand’s lineup. Hottest iteration was dubbed with S, but we know that Audi can do better, so 2018 Audi RS3 Sedan is at your disposal. If you cash out $55k of course. 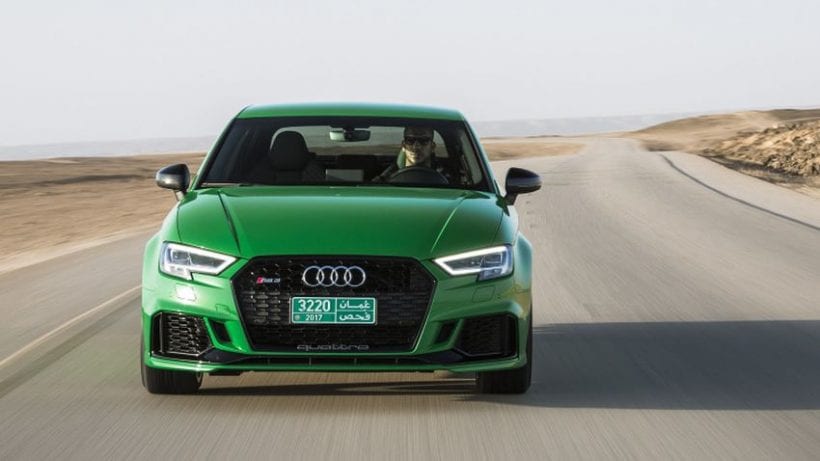 This A3 version is beautifully composed giving all clues of bigger saloons in a small package, making it irresistible. Well, in RS outfit it became angry, very angry. The big single frame grille is black and meshed, as well as enormous side intakes, black also covers lower parts of the front bumper, mirrors, window frames, while at the rear you have a huge black diffuser with enormous flaps and oversized exhaust tips. Alloys are unique, the whole car is lower by inch and almost that much wider.

So, despite being small, this thing openly grind its teeth in front of everybody’s face. You would do it too if you pack that much grunt under the hood.

On the inside? Flat-bottomed steering wheel partially covered with Alcantara, contrast stitching, aluminum pedals, beautiful sports seats, RS logos, and first of all, most serious cabin in terms of build quality and refinement in the whole class. You’ll also be pleased with 12.3-inch virtual cockpit and special RS theme placing big rev counter on the center, while also displaying tire pressure, torque, and g-forces among else.

And one more thing, if you ever wish to distract yourself from grouting sound coming from mentioned oversized exhaust, Bang & Olufsen audio system capable of producing 705 watts from 14 speakers is surely going to help.

The best part of all is 2.5-liter turbocharged I5 producing 400 hp and 354 lb-ft of torque. That is 30 hp more from BMW’s M2 and up by 20 hp from Merc’s CLA45 AMG. From zero to sixty you’ll need just 4.1 seconds, beating both mentioned rivals by some tenths, while you can go up to limited 155 mph. If that is not enough, you can opt for higher top speed at 174 mph if you ever plan to visit German Autobahns.

The engine is joined by 7-speed dual clutch automatic and Quattro AWD. If you were ever worried about stopping in this, don’t be, as it comes with, no less than, eight-pistons calipers at the front, while you can also check out the box for carbon-ceramic brakes when buying this beast. 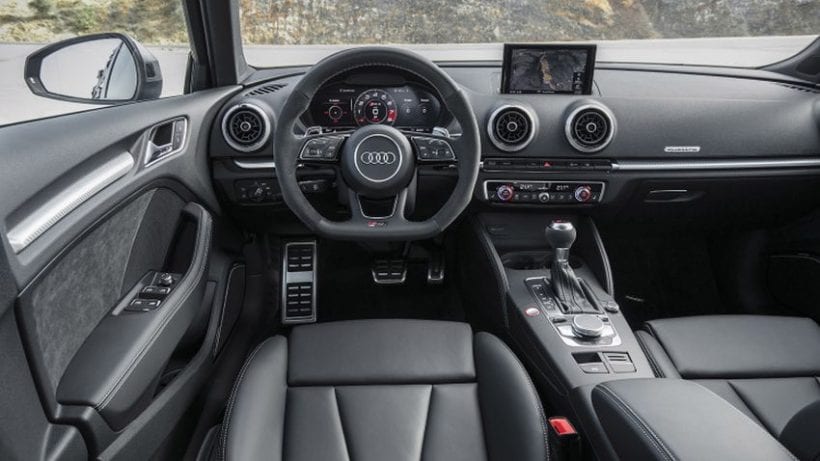 Interestingly 2018 Audi RS3 Sedan actually don’t have a direct rival in opposite to the hatch version which is faced with an abundance of them. The closest thing or CLA45 AMG blends coupe and sedan form, it is incredibly trendy, while Audi is traditionally shaped and astonishingly formal in everything, as always. Subaru WRX STI doesn’t carry a premium badge, and it is grossly underpowered while mentioning Nissan Sentra Nismo or Hyundai Elantra Sport in this type of review is sacrilegious.

So, in a world of evil compact sedans, if you cannot swallow Merc’s high-tech styling Audi is the only thing to turn to. In that case, I guess, you wouldn’t mind paying $55k, or five grand above Stuttgart offer or full $12k above same offer without R letter.