The model from the title was spotted during tests in Arctic reaches of northern Europe. Audi took the opportunity to introduce the new Q8 Concept at the 2017 Detroit motor show, and this SUV closely resembles that one, although the automaker did a thorough job of masking the vehicle. Not only does it have camouflage, but it also has false body panels underneath the mask which serve to misguide and mislead us while we are trying to determine the looks of the spied test mule. 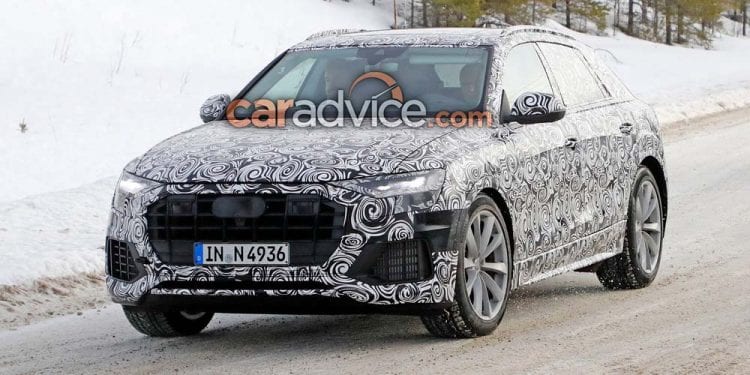 The concept and the actual vehicle both share a wide eight-point version of company’s single-frame grille and slimline tail-lights. Some of the things that are different are perhaps taller headlights, pull-out door and handles and bigger wing mirrors.

The model will be underpinned by the latest MLB platform suitable for front- and all-wheel-drive cars with longitudinally placed engines. This new vehicle looks a lot like its huge, boxy and roomy cousin- the Q7 SUV, but with a sportier physique and nature. 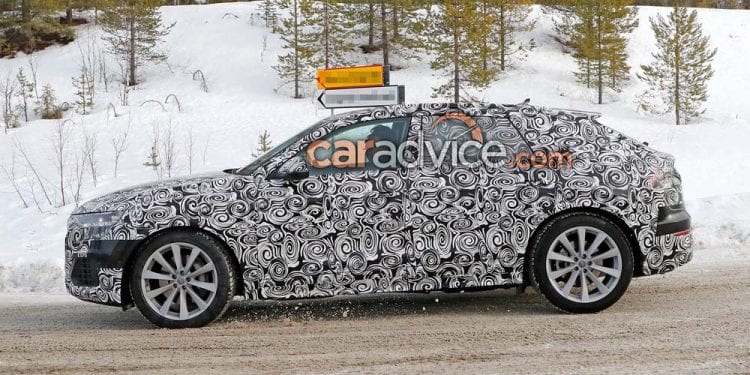 Since the 2018 Audi Q8 is designed to be sporty, the overall height is lower, it sits closer to the ground, has a raked back tailgate and shorter rear overhangs. Marc Lichte, companies chief of design, is leading the project and this is one of the first models that he is in charge of. Lichte stated that Audi’s vehicles will be more different from each other in the future. 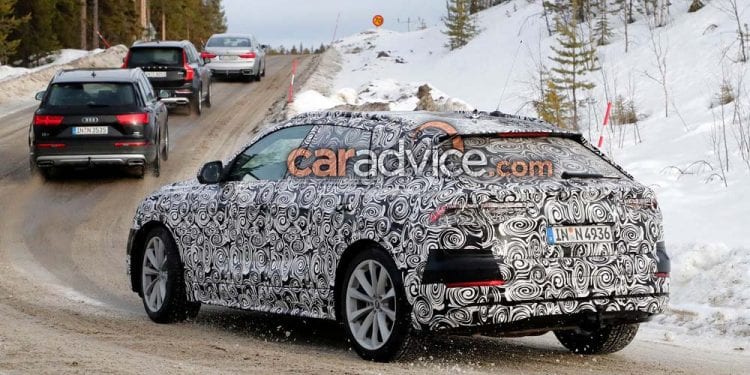 When it comes to powertrain, the Q8 will most likely borrow it from the Q7. Some rumors surrounding this model suggest that the RS Q8 Concept might be revealed in March at the Geneva motor show and that it will come with 4.0-litre twin-turbo V8 that is good for around 445 kW (about 600 hp) and 700 Nm.

The Q8 Concept that was first presented was a plug-in hybrid with a power output of 330 kW and 700 Nm of torque. We should expect the 2018 Audi Q8 to hit the dealership worldwide in 2018.

01/11/2017 UPDATE: At 2017 NAIAS we have witnessed Audi presenting its flagship SUV 2018 Audi Q8. Actually what German automaker showed was a Q8 concept which is intended to create competition for BMW X6, Mercedes-Benz GLE Coupe, and the Range Rover. This concept is longer than current Q7; it has a longer wheelbase, more cargo space but it can only accommodate up to four passengers. It is expected that production version of Audi’s latest SUV will have room for five people. The model that saw the light of the day at Detroit Auto Show was a plug-in hybrid e-Tron Q8 equipped with 3.0-litre TFSI engine paired up with an electric motor. Powering the electric motor is 17.9kWh lithium-ion battery. Combined power of these two powertrains is 438bph and 700Nm of torque. According to the Ingolstadt-based company, 2018 Audi Q8 concept has a top speed of 155mph and a 0-62mph ratio of 5.4 seconds. Power is transmitted to wheels trough eight-speed automatic shifter and Quattro four-wheel drive. Another engine option that could find its way onto 2018 Q8 is a petrol-electric hybrid, but there’s no word on it yet. As for those with speed in their hearts Audi will be offering an SQ8 version of this SUV which will be powered by a 4.0-liter V-8 diesel and ability to produce 429bhp. 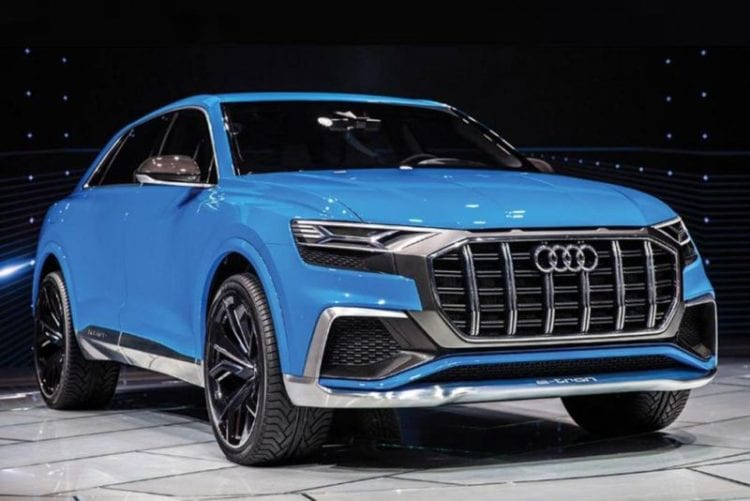 Design wise Audi Q8 2018 will be a little wider up front with single-frame octagonal grille stretched from end to end between all new Matrix LED headlights. New Q8 will ride on 23-inch alloy wheels and will be secured by carbon-ceramic brakes. On the rear end LED taillights are going to be made out of a single piece and also stretched across the entire width. Audi is saying that this trait is going to be their trademark for future e-Tron Models. Interior is remaining an unknown at this point because pictures of the interior haven’t been made public as of yet.

The introduction of the BMW X6 in 2009 spawned an entirely new segment of the car market. Although that particular segment is currently one of the most competitive ones, that wasn’t always the case. Originally, the Sports Activity Coupe crossover niche segment was only popular with SUV enthusiasts. The general public still opted for the most traditional SUVs and even large off-roaders. Then, in 2013 the M-Class surfaced. A coupe-like crossover with sporting and off-roading credentials made the public go mad for it. To add a cherry to the top of the cake you had a Cayenne Coupe rumor circulating the internet, adding, even more fire to the pan. Rather unsurprisingly, the third manufacturer from the large German trio wants to join in on the action with a vehicle on its own: the 2018 Audi Q8.

Although the first rumors and ideas were pitched in 2012, Ulrich Hackenberg, Audi’s technical chief stated that the Q8 will arrive in the following three years (2015/2016). Well, it’s currently those following years and we’ve yet to see an official statement or any sort of official images from Audi. But, a Q8 prototype was spotted testing this summer and it doesn’t look too far off from being production ready. 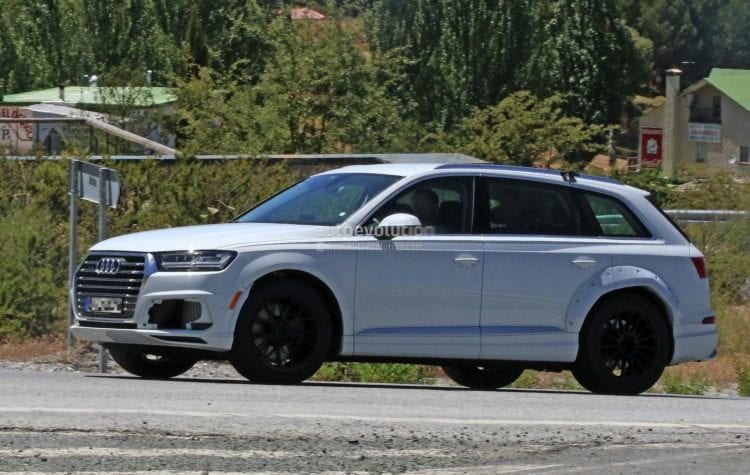 The exterior will surely be different to the Q7 but nothing too drastic. After all, the Q8 is a sporty-looking version of the Q7 so expect it to borrow most of the Q7’s styling cues. Specifically, the second-gen Q7’s angular lines, large front grille and thin headlights. The roofline will naturally slope down as it reaches the rear end of the vehicle giving it that coupe-shaped appearance. The rear end is expected to be revised all together and some of the inspiration might even come from the awesome Prologue concept. 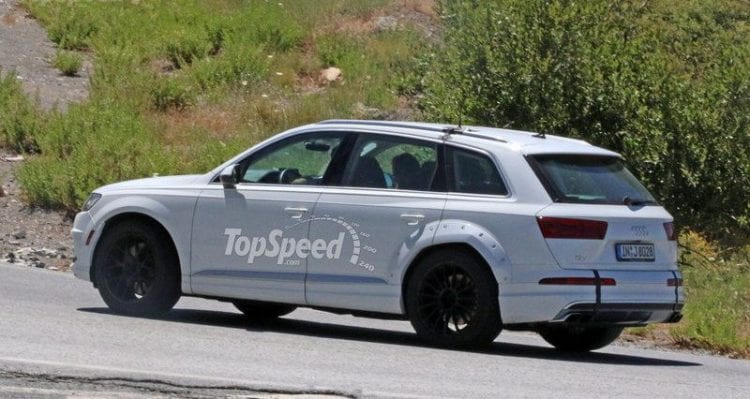 The man in charge of designing the Audi Q8 is Audi’s new design boss Marc Lichte. The length of the Q8 will be around five meters but probably not much more than that (how much more can you get anyway?). Of course, it will sit on VW’s MLB second-gen platform like most other large SUVs in the VW family (Audi Q7, VW Touareg, Porsche Cayenne and Bentley Bentayga).

What else can we say? If you like the Q7’s lines but thought it was a bit sportier and more aggressive than the Q8 will be the perfect car for you. If you’re a purist when it comes to these sorts of things or dislike SUVs altogether then you might not want to spend what is possibly a whole lot of money on the Q8. It certainly won’t be sold in the same amount of numbers as an A6 or an A4 but it just might surpass the Q7. If the X6/X5 combo is anything to go by, expect the Q8 to be much more popular than the Q7, the car which it’s based on.

They may be visually different on the outside but they most certainly will not differ much, if any at all on the inside. All of the large manufacturers use the same parts bin when it comes to interiors for nearly the entire lineup, so it’s small wonder that most of the cabins look exactly the same (especially if the cars you’re comparing are in a similar segment). The design of the cabin should be identical to the Q7’s, sharing the same dashboard, continuous air vent strip, digital instrument cluster and a much neater center stack. The technology and materials will be the same as the ones in the A8 flagship effectively making the Q8 an A8 on steroids. 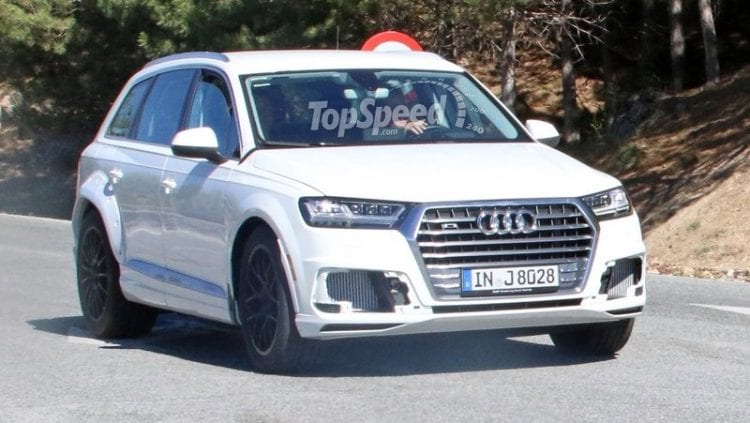 The seats will be wrapped in Alcantara as standard and you will get several color options complemented by a lot of accents both in aluminum and wood trims. One of the hits is expected to be the Beaufort walnut. The new MMI system will be featured in the 2018 Audi Q8, giving the driver intelligent suggestions for various tasks. Voice recognition is standard too and taking care of the infotainment side of things are two 10.1 inch tablets in the front seats acting as rear seat monitors.

The engine range is expected to be large but also small, depending on where the Q8 in question is sold. We expect to see everything from V6 and l4 petrol engines to powerful diesel.

The base engine is almost certainly going to be a 2.0-liter four-cylinder unit. You might be thinking: “A four-cylinder in a car as large as that? Surely it will be underpowered.” Well, it really won’t. The turbocharger ensures you get 252 hp and 272 lb-ft of torque. Although not the biggest figures, they’re more than enough to move something even as big as the Q8 around. 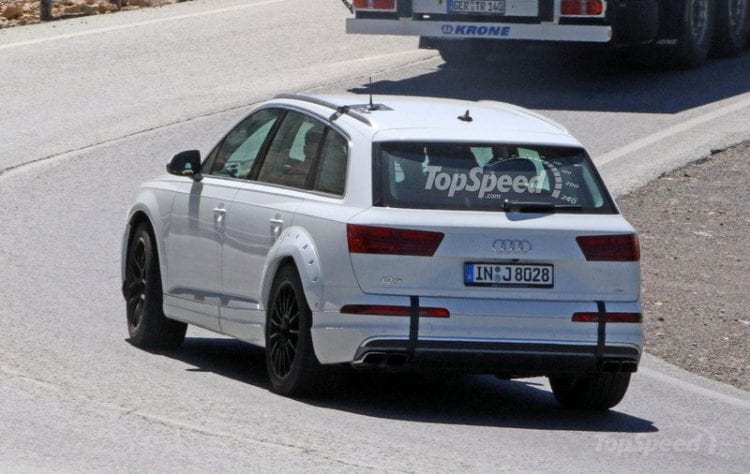 A 3.0-liter V6 unit will be present too, developing 333 hp and 325 lb-ft of torque (the unit used in the S4/S5). Currently, this is the most powerful gasoline engine in production (disregarding the R8). Ever since the 4.2 liter V8 has been dropped the 3.0 liter V6 took over in its place. Are we sad that we don’t get that wailing V8 sound? Yes, of course, who wouldn’t be? Is the increased torque and tuneability worth it? Absolutely.

A 3.0 liter TDI unit will be the only diesel available (anything smaller would be underpowered). The TDI produces 272 hp and 442 lb-ft of torque. The same engine will come in a slightly less powerful variant with 218 hp and 360 lb-ft of torque. The hp number might be small but look at the torque one. It’s a lot more than the 2.0-liter petrol, despite being down on hp.

Just like all other models, the Q8 E-tron will most likely happen sometime in the future. The E-tron features the TDI unit with an electric motor built into the eight-speed auto. The result is 373 hp combined and 516 lb-ft of torque. On electric power alone you can drive it for 35 miles.

Prices should begin from around $67k for the base model and $120k for the Audi RS Q8 when it launches.