We all grown increasingly tired of waiting for Alfa’s new sports sedan. So many announcements, so many talks, but the car took so long to hit the streets. Everybody was amazed when Giulia was revealed in the hottest edition, but quite a time passed when that version landed the pavement, let alone regular one after it. So when Italians started their talk about the first SUV, everyone thought, yeah sure, but probably in a decade or so. Since crossovers are definite hot cakes for some time now, the company did it faster, and 2018 Alfa Romeo Stelvio is about to reach the showrooms in a matter of days. There is no fooling around for Alfa as the brand is in ruins for quite a long time and it needs volume seller to get back on its feet. Also, everybody is joining the game lately, Jag with F-Pace, Maserati with Levante even Bentley with Bentayga, so its Alfa turn too.

Like most things coming from Italians, this one is gorgeous also. It is stylish, elegant and charged with emotions. Its side view shows resemblance to corporate brother Levante and shape is definitely one of the hottest ones in the segment grouping it with Jag F-Pace and Porsche Macan against other rivals. We don’t have a word of complaint about the sculptured rear end, but as for front and Giulia’s headlights, we somehow sense that Alfa could do better than that and at least make it more distinctive from that point of view.

The cabin is taken from Giulia, and besides alteration to highest upper part of the dash, Alfa hasn’t bothered to change anything further. That is fine by us, as the cabin is as beautiful as the exterior is. Passionate lines and curves are overlapping each other all over the place, and honestly, that is something that we do expect from every Italian product.

There are three trim levels, base one Stelvio, Ti and top of the line Quadrifoglio. Latest one comes with some serious sports connotations, flat-bottomed steering wheel, Alcantara splashed over many surfaces, red contrast stitching, carbon accents, aluminum shift pedals and quite a few more stuff going even to the optional Sparco’s carbon-fiber shell seats. Regarding tech part, in base model you have 6.5-inch touchscreen incorporated in the dash, which is quite small by current standards, so better opt for 8.8-inch one, while Apple CarPlay and Android Auto comes as standard and handwrite recognition is also expected. 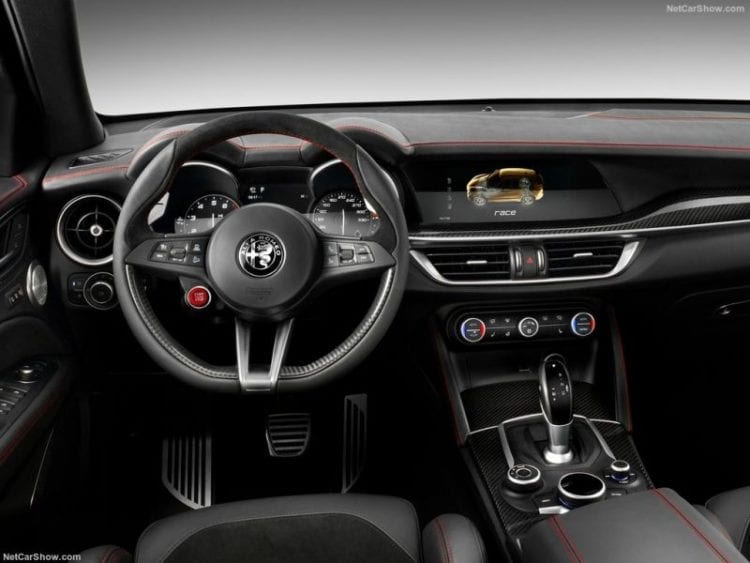 Starting offer in engine department would be 2.0-liter I4 featuring the aluminum block and head and supported by the twin-scroll turbocharger and an intercooler, resulting in the total output of respectable 280 horsepower along with 306 pound-feet of torque available as low as 2250 rpm. For wallet protection during gas pump visits you have MultiAir system, already known from Fiat’s models, which plays with variable valve timing.

If you opt for Quadrofoglio, it is not just about the trim as it is about the under bonnet area, and that is something that we expected based on Giulia, that was willing enough to borrow its aluminum 2.9-liter twin-turbocharged V-6 boosting 505 hp and 443 lb-ft of torque. That makes this compact SUV teleport to 60 mph in 3.9 seconds which is nothing short of magnificent in SUV world and something that also easily embarrass Audi’s SQ5 and Merc’s AMG GLC43, making it proudly stand next to Porsche’s Macan Turbo.

We are talking about basically scaled down V8 engine used by Ferrari and Giulia’s platform which heavily leans on aluminum use, so with that heart and that body, it is no wonder where do those figures come from. Making sure that power is adequately used is a job of 8-speed automatic transmission, AWD system which could employ front axle if needed, torque vectoring for the rear axle and adaptive dampers. 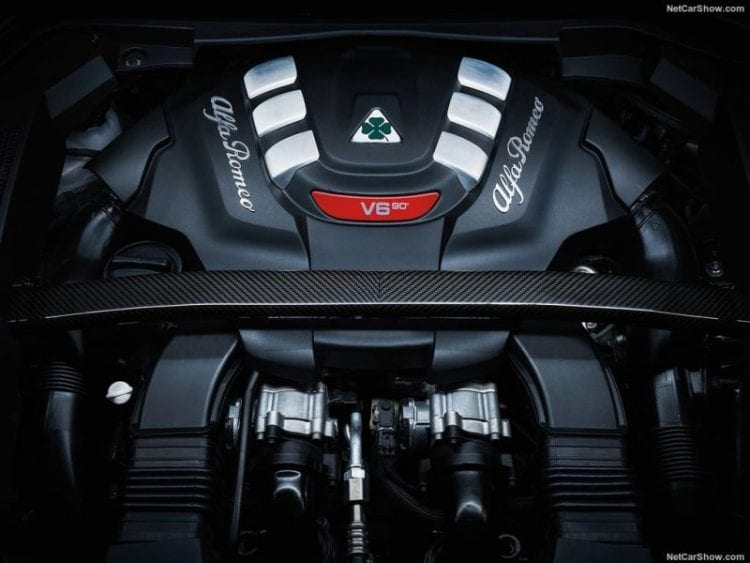 Not just that 2018 Alfa Romeo Stelvio is beautiful, it is also tremendously fast when “leaved” making it as alluring and irrational as any Alfa is. If the emotional steer is the thing that you are looking for, look no further and prepare to cash out from $50,000 all the way to $70,000 if you opt for Ferrari’s heart.