Acura TLX as we know it, debuted at the 2014 North American International Auto Show as a 2015 model year. A couple of years have passed from its introduction, and the car is now scheduled for a mid-cycle update. The upgrade is scheduled for next year, and it should come with 2018 Acura TLX. To confirm our thoughts on the subject we have spy photos of the TLX test mule. Testings are already well under way, and the model should be ready for its presentation somewhere during 2017.

The updated model that will be introduced at the New York Auto Show in April has already been seen on some spy shots that revealed that the automaker tested at least three versions of the TLX. Less than a month ago Motor1 got an official confirmation from Honda about the new vehicle, and despite not knowing much more about the 2018 Acura TLX, the company just published an official teaser which partially reveals the model.

In the press release, Acura stated that the update “includes new premium features and technology enhancements that place the TLX among the most technologically advanced and well-equipped cars in its segment.” 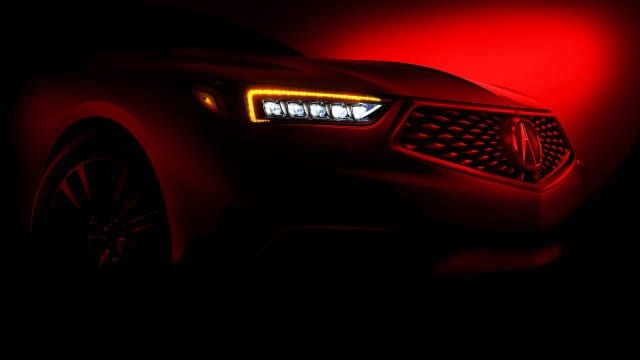 The 2018 model has already been seen undisguised as the photographers caught the company off guard in the middle of a photo shoot. The automaker borrowed some exterior design features for the front end of the Precision Concept, while three different nose configurations indicate that we may be looking at several trim levels or engine setups.

The vehicle on the first image appears to be an entry-level TLX, while the other two pictures perhaps show a sport and luxury versions. After zooming in, brightening and comparing the teaser and these three photos, we came to the conclusions that the red TLX model in the middle photo appears to feature the same fascia as the one on the teaser image. 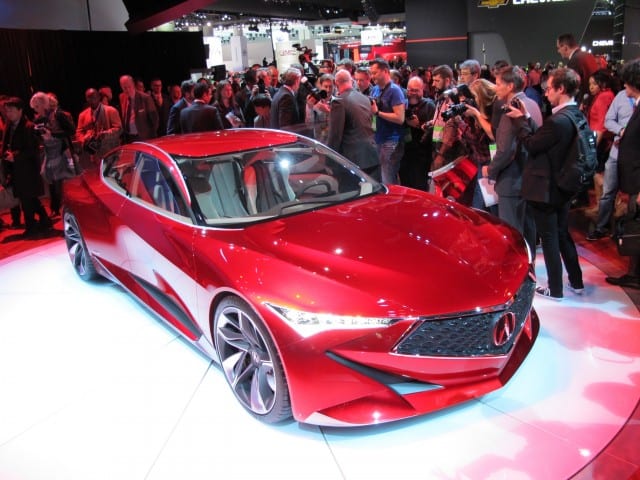 Two powertrain options that are available currently could be carried over with few tweaks. Acura’s 2.4-litre inline-four paired with an eight-speed dual-clutch gearbox is the base version which is good for 206 hp. The second option is a 3.5-litre V6 mated to a nine-speed automatic transmission, and that setup produces 290 hp. If you choose the V6 engine, Acura’s Super Handling All-Wheel Drive system is also available.

We still do not know if the company plans to change these units or keep them as they are. Certain rumors suggest that the new model might even sport the V6/hybrid powertrain from the new MDX, but we will have to wait a couple of weeks more when the 2018 Acura TLX will be introduced at the NY Auto Show.

The new spy photos show the rejuvenated TLX without any disguise. It seems that Acura was in the middle of making a promotional video for the new model when our camera spotted the new TLX. Such assumptions can be drawn from the camera car that was seen close by.

The 2018 TLX features a new front end which Acura most probably borrowed from the company’s Precision Concept that was revealed at the 2016 Detroit Auto Show. The Japan-based company obviously wanted to give the model a sportier look which is why it now has a five-sided grille instead of the chrome beak that the current model sports. The hood and the front fascia feature a sharp crease, while the rear has tweaked taillights along with a black lower segment.

It seems that the new version will come in three different variants, judging by the three distinct pieces of the front fascia. The white TLX shown above has the most basic design with plain inlets combined with chrome trim stretching on the top. 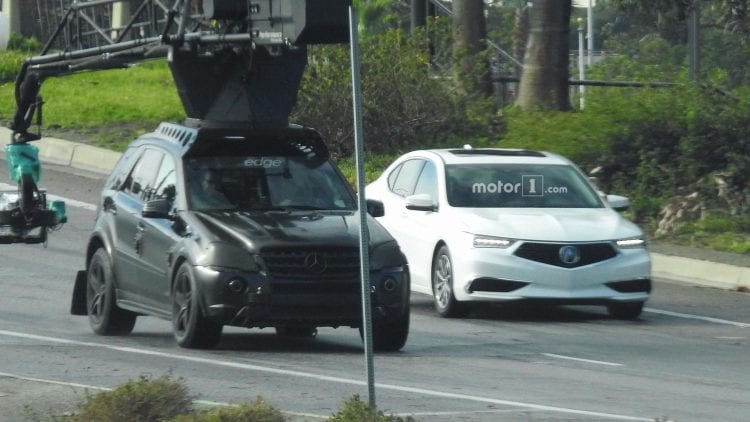 The second version is another white model which features a black center section on the front and fog lights in bottom corners with bent trim. Like the previously mentioned vehicle, this one also features a thin trunk lid spoiler.

The third option is the red car that shares many similarities with the basic one. However, the fog lights are placed in the bottom front corners. Although these images are not that clear, this TLX version also seems to have a body-color trunk lip spoiler. Acura decided to go with chrome accents on the rear bumper.

We still do not know what new features the rejuvenated TLX will have. When it comes to engines, the 2.4-liter four-cylinder, and 3.5-liter V6, that the current model has, are expected to be used on the newest version. We may be even looking at a hybrid model on these pictures. The hybrid could bring the 3.0-liter V6 combined with three electric motors borrowed from the most recent MDX. In the cabin, many updates are also expected, but we still do not have any details nor photos of this segment.

In the current stage of trials 2018 Acura TLX test mule is wearing heavy camouflage, but some of the changes are quite obvious. Looking at the front part of the car which is wearing most camo we can conclude that new vehicle is going to feature a refreshed front fascia. The old silver grille is going to be replaced by a mesh one that will feature Acura logo in middle section. New grille design first debuted with Acura Precision Concept and later found its way onto refreshed MDX model and now on TLX. This grille gives the sedan a sportier look, and it was only the matter of time when will Acura put it on all of its models.

Headlights are going to keep their narrow angular shape but are going to be a little bigger than before. Not much can be said about taillights because of the camo, but they seem to differ from current units. Another thing that is missing is the silver window trim that was standard on all Acura models. As things stand now, they will probably be optional depending on the trim. The rear end, past the taillights, looks almost the same but small changes are possible. The biggest difference here could be the exhaust pipes which are not visible on the older and current models but could be on the 2018 Acura TLX.

Interior wise not much is known. The previous version featured some standard and optional features. 7-inch touchscreen display, GPS-linked climate control, premium sound system, navigation, HD radio, Pandora and Aha integration, Siri Eyes and USB and HDMI connectivity should all find its way to 2018 TLX Acura. Electrically adjustable, heated and ventilated front seats should come as standard. Safety on this model was always top notch, and it should remain the same after the mid-cycle redesign.

Later one would have to be tempered with to be able to compel with gas emission standards. If these criteria are not met there is a possibility that it will be replaced with a four-cylinder engine which is the same thing that is going to happen with Honda Accord. 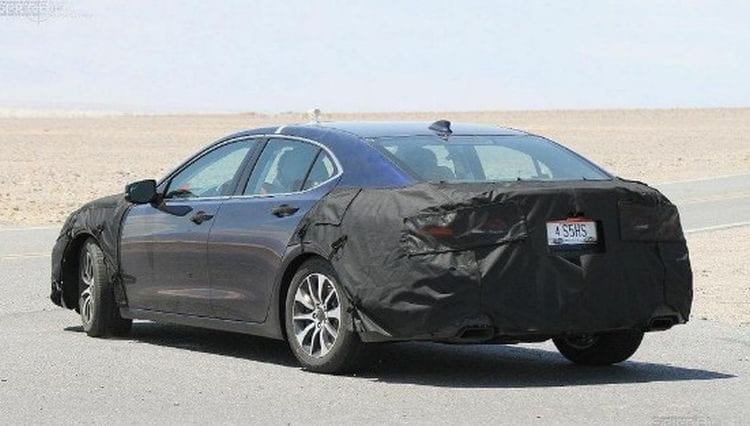 At the moment there is no word on the release date and price of 2018 Acura TLX. Rumors suggest that this model could be presented in the second quarter of 2017 while the sales would start during the summer. Price should go up but not considerably.