The Swedish automaker has surprised us several times this year and now it continues to emerge in the news. After canceling some models decades ago, the company has apparently decided to revive them and make them for the current market. Previously, the same could be said about the S90 model, which was discontinued years ago but revived this year to be one hot luxury sedan that impressed everybody and made even the most skeptic reviewers say “looks like Volvo is finally serious about what it does with cars.” We observe the same thing happen with another recently introduced model from the manufacturer, V90, which was canceled in the late 1990s. Back then, it was a decent wagon that was making good sales, but the production was stopped just after only couple years on the market.

The good news is that V90 returns this year! Moreover, it makes its return as the company’s flagship wagon! We are pleased by this news; let’s face it, Volvo has been nothing but great in sedans and wagons these years, so it is good to see something new from Swedes. 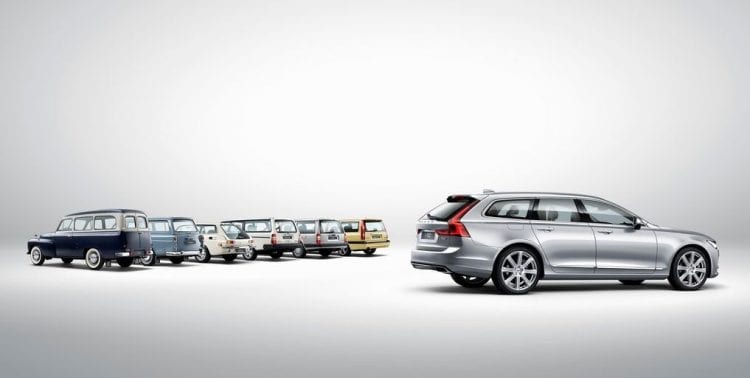 Allegedly, the latest V90 will be built on the new Scalable Production Architecture Platform that was used in other recent models released by Swedish car maker, including the S90 sedan and XC90 SUV. Also, this could mean that the three models will share a lot of features, such as an engine. We said “could” because Volvo has been silent on the powertrain information so far but we certainly can make some reasonable predictions.

As of June this year, the manufacturer has not confirmed the engine details but stated that the model would be available in the United States. Given the lack of details, we are writing this review from the information that was provided so far along with the images on the official Volvo website and on this year’s Geneva Auto Show.

When we first saw V90 on the photos, it reminded us of the S90 model which has been unveiled this year as well. To be more precise, the manufacturer has used a lot of similar design features in V90, because the two models are almost identical in their exterior between the front and B-pillars. Both cars will continue to use the latest Volvo’s styling language but also some of the traditional elements. First and foremost, the body of V90 is much more sporty and upscale compared to the predecessor, which utilized the boxy design of the 1990s. 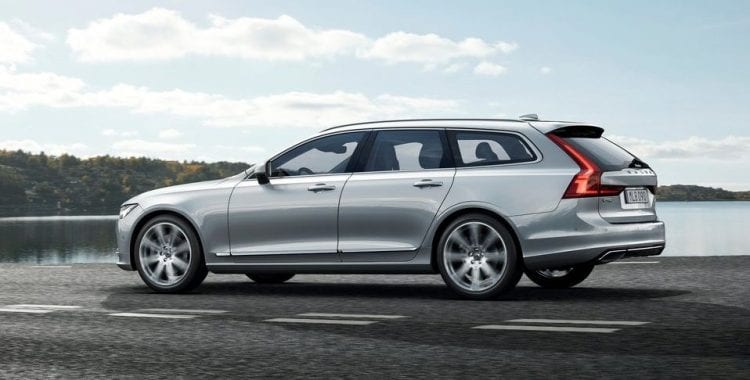 This is a reasonable move since situation on market changed dramatically and if we take a look at the current lineup of Swedish company we can see in which direction new model will go. We remember that 1990s model was a remarkable one when it came to the cargo space because of the boxy design that allowed an impressive volume of storage. The storage space in the new V90, however, will be significantly smaller because of the sporty roof and more aerodynamic exterior. The decision to employ modern design seems reasonable but will upset old-school enthusiasts.

Having seen the cabin, we can confidently claim that it shares a lot of elements with S90. Specifically, both front and rear passenger compartments seem to be very similar regarding equipment and styling, which means that the S90 will come with the identical dash. It features great-looking wood inserts and vertical A/C vents, surrounding the infotainment screen. It looks like a tablet touch screen display with crisp graphics. 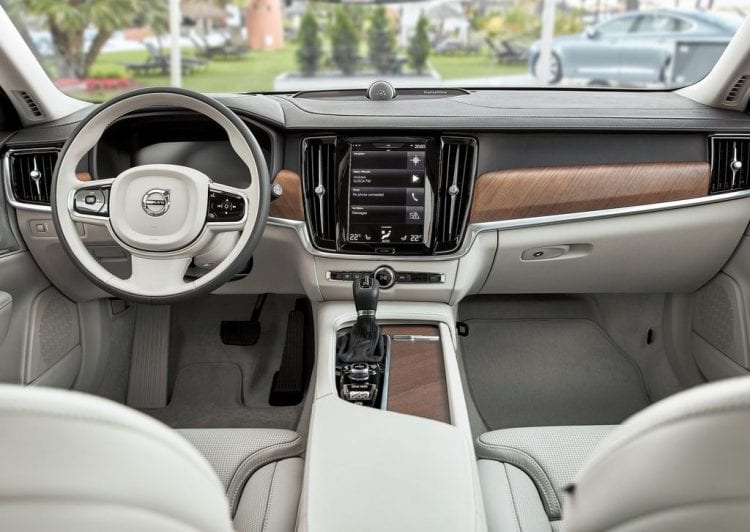 The space for passengers will probably remain the same as in S90 because of the same body dimensions, but the baggage room will be enhanced because of wagon configuration. The room can also be increased by folding up the rear seats, which makes the model not only one of the best wagons in the world but a very practical car for shopping.

Overall, the cabin looks very premium because of the soft-touch surfaces and advanced materials throughout the interior. There are few competitors in the segment, and especially those from German car makers are fantastic. We are glad to say that Volvo has a model that will be able to compete successfully with every car currently available regarding comfort and quality.

As we mentioned in the introduction, the Swedish automaker has not provided any details of the powertrain on the V90. However, we know that the vehicle shares the platform with two other recent Volvo models, the powertrain details of which are already shared. Therefore, we think it is safe to assume that V90 will have the same engine and transmission options. Accordingly, the wagon will have two gas engines, two types of diesel, and one hybrid option, which is a pretty good range. 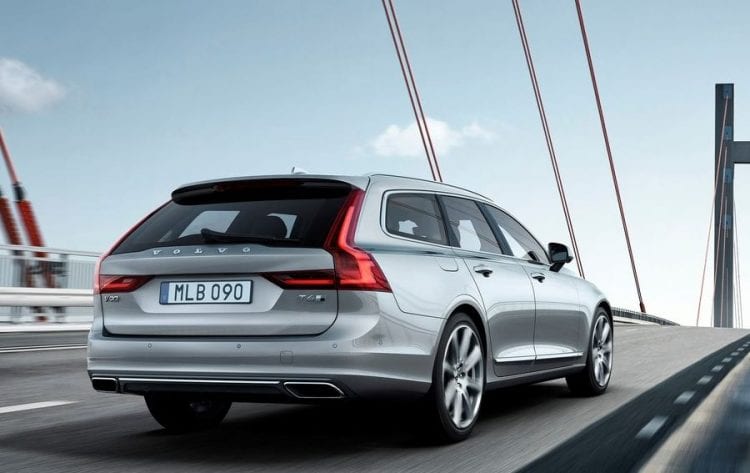 The gas engines are T5 and T6 units that deliver 254 and 316 horsepower respectively. Both of them are turbocharged. As for the diesel options, they are called D4 and D5 and generate 190 and 225 horsepower respectively. Clearly, the Swedes ensured that the customers would have a good selection of the engines, which is an advantage on the modern market. 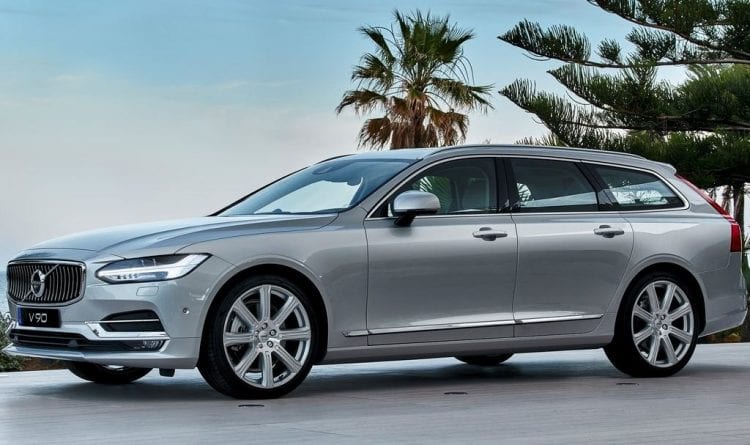 The people who favor green engines also get what they look for: the hybrid unit for V90 will combine a 2.0-liter turbocharged petrol unit and 60-kW electric motor. It will be called T8 and produce insane 400 horsepower. Finally, the transmission options will include a six-speed manual and eight-speed auto which is enough for most drivers and perfectly fits every engine.

It is always interesting to see what Volvo has prepared for its models this time. The V90 did not disappoint us because it has a great selection of safety functions: Driver Alert Control, Run-off-Road protection, Road Sign Information and many others. As a standard, the manufacturer provides the vehicle with City Safety Package, identical to the one we find in XC90 and S90 that includes the features mentioned above. 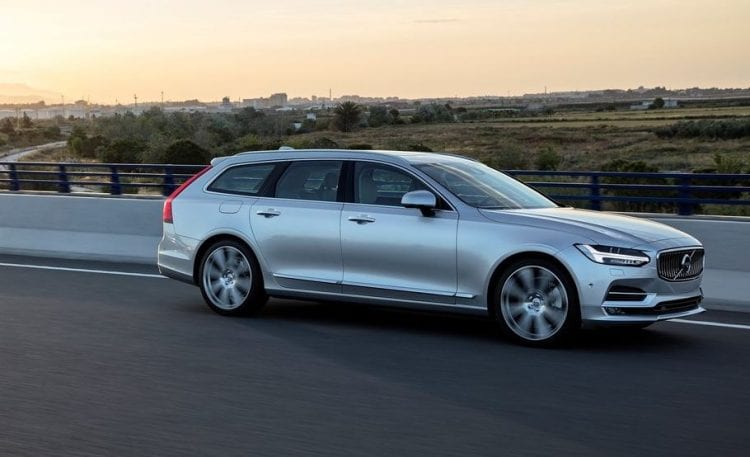 The range of optional ones is also impressive and features Pilot Assist, Adaptive Cruise Control, Rear Collision Warning, and a 360-degree camera. The Pilot Assist feature transforms V90 into a semi-autonomous vehicle because it provides control over acceleration, braking, and steering. Indeed, it is a revolutionary car for Swedish brand that promises a clever solution for even more advanced Volvo safety standard.

The prices for the European market are available this time. In the U.K., the model starts from £34,550, which is a £2,000 increase over S90. The range of engines will increase the price even further. In the U.S., V90 will probably start from around $45,000 to stay competitive.