Volkswagen entered compact SUV market in 2007 with Tiguan. It stayed nine years on the market, something that car maker from Wolfsburg has a habit to allow, probably because sales reached properly serious figures after 2011 redesign and stayed high till the end. Anyway, this year we witnessed new generation which featured complete styling makeover complemented with the much more refined interior, worthy of the badge.

Since VW is in an unfortunate position these days, it is expected from them to make an extra effort in order to redeem themselves, and 2017 Volkswagen Tiguan Allspace is pointed to the US at the first place. 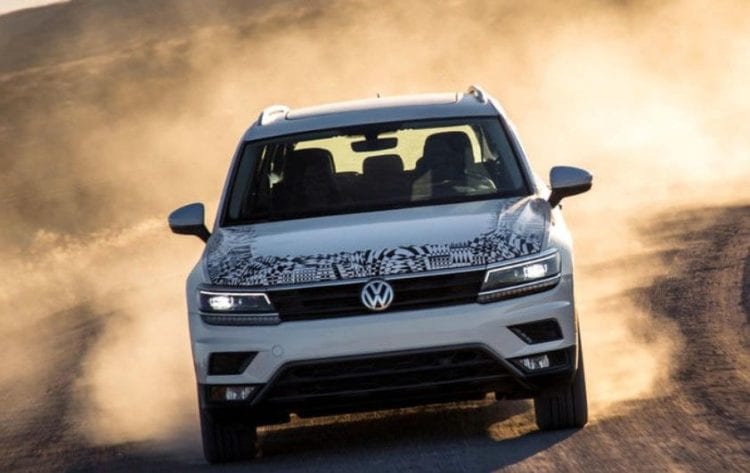 Dr. Jochen Böhle, head of compact car department at VW revealed that future brands path of expanding success lies in broadening SUV offer, but with sleeker and more stylish models. This was later clarified with confirmation that Tiguan would receive sloping roof in an attempt to rival Land Rover Evoque, which is highly overambitious, but Mazda’s coupe version of CX-5 called CX-4 in China where it is currently on sale is its proper match.

German automaker recently registered several names beginning with letter T- Teracor, Tribe, Trillium, and Terasun, while the first letter points to brand SUV part of the lineup, but Böhle assured that all versions of Tiguan are going to keep using that name. SUV expansion doesn’t end there as smaller SUVs are in the plan, with the materialization of T-Roc concept or production of an even smaller vehicle possibly branded as T-Cross based on Polo, at least that is what comes to our mind.

From the beginning of the second generation, there were rumors about longer version poised to rival segment leader Qashqai with three-row configuration. We saw spy shots of Passat Estate which was used for testing Tiguan’s new bits and these days we can see photos of actual elongated Tiguan with no disguise at all. It was thought previously that name would be Tiguan XL, but now we know that  2017 Volkswagen Tiguan Allspace moniker is reserved for it and that official introduction is scheduled for Detroit Auto Show.

Keep in mind that Allspace nameplate is going to be transformed to Tiguan Long-wheelbase just for the US, so nobody there could get confused about what it is. So, there were lots of promises, and one of them is certain, and it is almost here.

VW Tiguan is a pioneer in brand’s SUV class with the usage of highly flexible MQB platform that can underpin pretty much everything in German car maker’s lineup. Tiguan version of the platform in question is called A2 and it will also support new Skoda Yeti and Audi Q3, while it is already supporting Seat Ateca and Skoda Kodiaq.

Since MQB platform could suit VW Polo and Atlas at the same time, it was extremely easy to make it adaptable to two more seats that Allspace model is going to use and extended wheelbase is the exact match to the one in Kodiaq which can also seat seven. Allspace is going to be built in China and Mexico, while production in Europe is not in plans at the moment.

Nothing will change styling wise with Allspace model, expect for little bit bigger rear doors and rear overhang, which is hardly noticeable on the street. It has additional 22 cm while 11 of those is reserved for the longer wheelbase. A middle row of seats can slide so extra space is created for the third row, although it doesn’t change much bleak prospect of the third row which is suitable only for children and it is difficult to get into.

Under the hood everything will stay the same as with regular model, so due to the larger dimensions economy and performance figures could get slightly worse. On the plus side possibility of sliding second-row seats allows the creation of bigger boot if the last row is packed inside the floor. In conclusion, you’ll get two extra seats for some more cash and if you don’t forget that this is a compact car no expectations would be failed.