Wolfsburg should be pretty satisfied with happenings in the compact crossover segment. Tiguan has become an instant success in Europe, quickly surpassing its rivals and lagging behind only Nissan Qashqai at the moment, but since Japanese representative already has iconic status on the old continent, Volkswagen should be pleased with the current situation. Offensive within the corporation has already started with new Skoda Kodiaq and Seat Ateca, so obviously, Germans have set their sight on the highly lucrative compact SUV segment in a desire to extract most of it.

There is even broader thinking happening here as segment itself carries two sizes and two price brackets, so already we have double offers from Nissan as Qashqai and X-Trail, Honda’s HR-V and CR-V, Toyota’s CH-R and RAV4 and so on. VW has been known lately for its greed, so it would be natural for it to squeeze some penny extra, especially since recent financial losses. That’s how we came to the upcoming 2017 Volkswagen T-Roc concept. 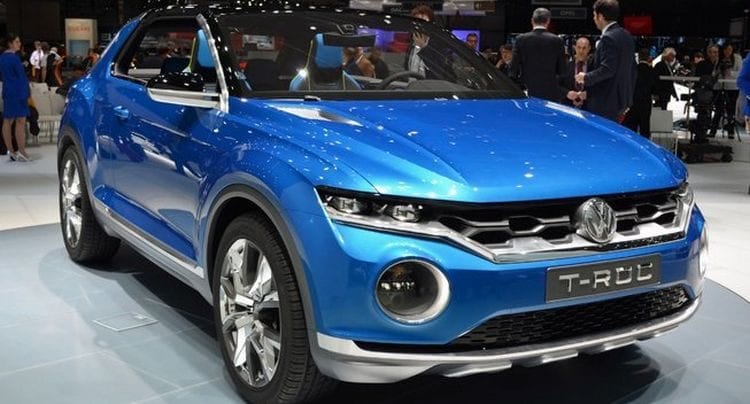 It is two things. First it is concept shown in 2014 during Geneva Auto Show, and second, it will be another concept that is set to debut in March this year and again on stages of Geneva. The first concept offered quite a futuristic look, with a proper Targa roof, which would make it first SUV with that feature, but since VW is not prone to surprises, maybe that should be left for Nissan or Land Rover, which already dared to offer the roofless version of their SUVs. The second concept that we are waiting for should present near production version, and then we will see how many clues from older version survived. Anyway, we wouldn’t object if quite energetic and modern front and rear fascia carry on as it would represent nice refresh compared to often dull looking brand’s models.

As said T-Roc is going to be compact crossover same as VW Tiguan is, but it will seat in the lower bracket of the same class. That means smaller dimensions and lower price. For example, the concept is more than 300 mm shorter, 8 mm narrower and 130 mm lower. Although concept did came as a two-door version which is highly unlikely in reality, so additional doors might stretch its size further bit, but definitely below bigger sibling. It will use MQB platform, and what else, since they spent staggering 60 billion in developing it, so everything is going to be underpinned by it. Since interior size is going to be closer to Golf offering, it will probably carry along with its cabin too, which is praiseworthy due to its above class refinement and new 9.2-inch infotainment system supporting gesture control, which not so long ago debuted in $80,000 BMW’s 7 Series.

Under the hood, there will be familiar 1.0-liter three cylinder turbocharged petrol engine rated at 113 hp and more powerful 1.5-liter turbo unit with either 128 hp or 148 hp. GTI model will carry 2.0-liter unit boosting 242 hp. Diesel option will stick to known 1.6-liter and 2.0-liter units. Since VW openly declared its move toward alternative sources of power, we should expect T-Roc GTE hybrid and e-T-Roc electric model to emerge. Both will borrow all bits from same Golf versions, so as the rumors for e-Golf are circling around it should receive a new battery with a range of very good 186 miles. For gearboxes, there will be a choice between 6-speed manual or 7-speed DSG dual-clutch automatic. Also, four-wheel drive version should exist as an option. 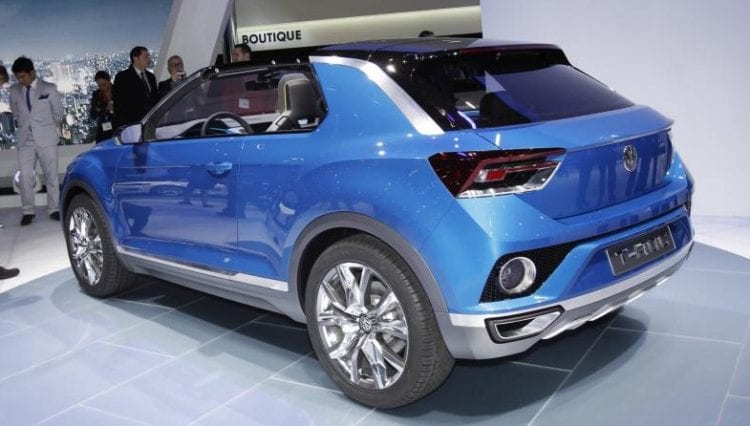 2017 Volkswagen T-Roc will debut in the second half of 2017, while new close to production concept will be previously revealed in March as stated above. T-Roc is a second part of the brand’s plan of introducing three new SUVs, first was mid-size Atlas and third will be subcompact production version of the T-Breeze concept. Since Tiguan is more than well accepted in Europe, there are no any visible obstacles for T-Roc, and maybe it could even surpass it with its trendier styling and lower price tag, time will tell.