Volkswagen has offered just one totally electric car for North American market, the new 2017 Volkswagen e-Golf, and that is an electric version of Golf that debuted in 2015. As for the US, it is present in only ten states, and since you wouldn’t easily recognize it on the street, maybe you even miss the fact that it exists. If that is the case, then pay attention of what VW has prepared for its best-selling model in order to electrify it.

Styling changes between regular model and EV are hard to spot, and whether you are concentrating on exterior or interior, it pretty much looks the same. As for driving characteristics, they are also unchanged, though suspension has been adapted to the extra weight carried by batteries. So, you can expect precise steering and trustworthy behavior in corners as usual with the standard model.

When it comes to the safety neither IIHS nor the NHTSA has separated this from the regular version which received high safety rating, so the exact behavior of electric version is unknown, and we have to keep in mind that mentioned extra weight could alter test results in some manner.

Now we come to the important part. The real difference should be a total lack of internal combustion engine and introduction of electric motor and batteries. The 24.2-kwh lithium-ion battery sends power to the electric motor producing 114 horsepower, which then powers front wheels.

2017 Volkswagen e-Golf accelerates to 60 mph in 9.9 seconds, and top speed is 93 mph, so it is far from impressive. One thing for sure is that you can always count on that high torque that is immediately available as with all other electric cars. It is offered in two trims: Basic SE and more luxurious SEL which increases the price by $6,500. The range that you can count on before batteries become depleted is 83 miles, while the higher capacity battery pack and more range are expected in future.

When you want to top up the battery, there is a big difference depending on the trim that you chose since SE comes with 3.6 kW charger and SEL comes with 7.2 kW, but with DC quick-charging you can get up to 80% in half an hour.

Public interest in alternative fuels has created some rivals in its segment, so there are BMW i3, Mercedes B-class Electric Drive, Ford Focus Electric and most importantly Nissan Leaf which is by far most popular with sales almost hitting 250,000 which represent highest selling number for any electric car in the world. Leaf has a better range of 107 miles as is i3 with 110 miles, so Golf is pretty lagging in that area at this moment at least until boost arrives.

Nissan’s charger is 6.6 kW, better than VW compact’s in SE trim, it is worse than one in SEL trim. Japanese gets a bigger boot with 24 cubic feet compared to 17 of German representative. In the end, the price is around $30,000 which applies to both models. 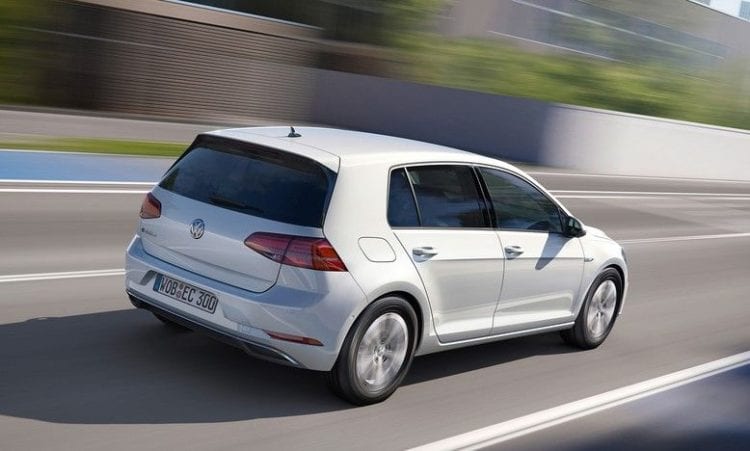 Leaf is better developed in the technological sense since it gets better range and better charger compared to base trimmed Golf, and that are most important facts with data of electric cars. On the other hand, Golf is still Golf, giving a much better ride, noticeably better quality, refined interior, and class leading ergonomy.

Leaf is curiously styled, shouting about unconventional things happening under the hood, while e-Golf is restrained keeping its peculiar facts in low profile. So same segment but different approach, and the decision is brought by personal tastes of each buyer.