Word “Volkswagen” has been associated with some pretty negative connotations for some time and “dieselgate” is just refusing to ease its momentum. These are hard times for second largest car maker in the world and hard time gives birth to unordinary ideas. Volkswagen has been missing its opportunity to surprise us for many years, all the way from the introduction of Phaeton and apart from Passat CC, nothing unusual was happening. Since VW messed up pretty badly on the largest car market in the world, it is time to change the way of thinking.

ONE CAR ONE MARKET

Emission scandal has created huge sale drops and pretty hefty fines for German automaker in US market, while far fewer things are happening in Europe, and in that manner, new Atlas is reserved just for the North America. There is a possibility that it will be sold in China too, but that is still unclear at this moment. Making car just for the American market is something new and not seen yet by VW, born as result of out of the box thinking forced by present circumstances. 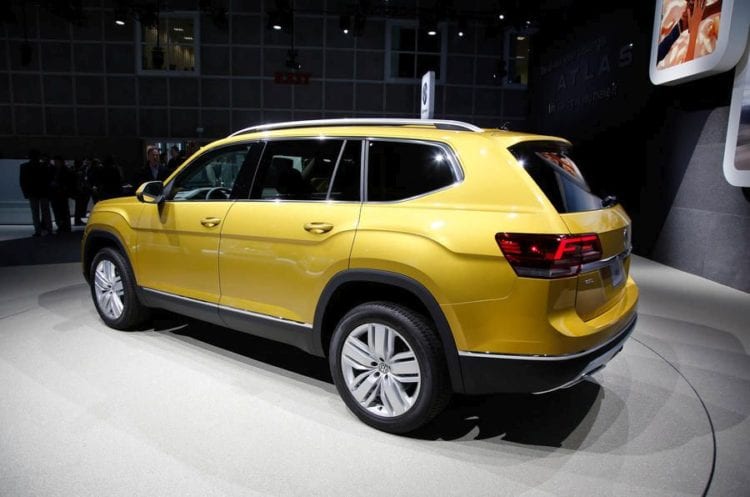 It needs to appeal to American buyer only, so it is adjusted to that. The Crossblue concept, from three years ago, gave pretty accurate hints of what should be expected, and here we are with large, muscular, imposing SUV with simple design lines in order not to confuse buyer accustomed to Expedition, Tahoe, Escalade and that sort of bunch. Interior is the same story, lack of complexity, clearness with massive surfaces and abundance of space, are all together confirming targeted market. They made an effort to make it closer to buyers in question and results are visible.

With the particular market in mind, of course, it will be huge, it is one of the biggest VW so far, if not the largest one. With 4922 mm in length, the Atlas is 121 mm lengthier than previously largest SUV, the Touareg. It is also 1979 mm wide and 1767 mm high, making it 38 mm wider and 35 mm taller than the already mentioned Touareg. So with that proportions, it doesn’t have any problems in being genuine 7-seater, able to accommodate all travelers as adults and also their luggage.

You have a choice of two engines, a turbocharged 2.0-litre four-cylinder TSI with 238 bhp and a 3.6-litre six-cylinder VR6 with 280bhp. VW had enough decency not to offer diesel engine due to the current situation. Both units are coupled with an eight-speed automatic transmission, but the 2.0-litre has only two-wheel drive option, while the VR6 can be specified with 4Motion four-wheel drive system.

As all other VW, it will have a long list of extras so that you can suit the car to your needs or your wallet. Among many, infotainment system can be specified with Volkswagen Car-Net which brings Apple Carplay, Android Auto and Mirror Link, Fender Premium audio system with 12 speakers and a 480-watt amplifier can be ordered.

Safety is another segment that hasn’t been forgotten, as you can opt for driver assistance systems such as adaptive cruise control, forward collision warning, autonomous emergency braking, blind spot monitoring with a rear traffic alert system, lane departure warning and park assist technology.

What’s different about the Atlas is the fact that this is the only car in its class to come with an automatic post-collision braking system, which keeps the brakes applied in the second phase of an accident to prevent further impacts.

VW really need to do something about improving its image on US market and tailoring 2017 Volkswagen Atlas individually for it could be good step in that direction. It will be built there in Chattanooga, Tennessee plant and while the price is still unknown, we expect it to be competitive.

To sum up, it has American looks, American size, American price, and if this proves as failed redemption attempt, VW should consider withdrawing from the market in question. But let’s stay positive at this moment and see how forgivable is American heart.