The 2017 Toyota Supra was seen with the production body for the first time and our spy camera was there to catch it. Unlike the development cars we saw earlier, the new vehicle does not have the same bumpers like BMW Z5. Instead, the front bumper is more prominent and has three grille openings. Also, the outline of the vehicles horizontal taillights can be seen. Combined with a coupe roofline which is quite different from Z5’s, the new Supra looks like a softer variant of the FT-1 concept.

Toyota and BMW recently extended their partnership and the new Supra will most likely be launched in 2018 soon after Z5. The two models will share the same hybrid four-wheel drive set-up with a BMW petrol engine and electric motors which get their energy from super capacitors. As a part of their partnership, the new Toyota vehicle will feature the carbon fiber architecture from BMW’s i3, i8 and 7 Series.

The predecessor of the 2017 Toyota Supra was a coupe that was produced up until 2002, but the new vehicle is inspired by FT-1 which was first seen two years ago in Detroit. Placed above the GT86, the 2017 Supra will also cost more than the £25,495 GT86 because of the advanced powertrain and construction. This figure should easily surpass £50,000 and if you know what it could bring you will not object. 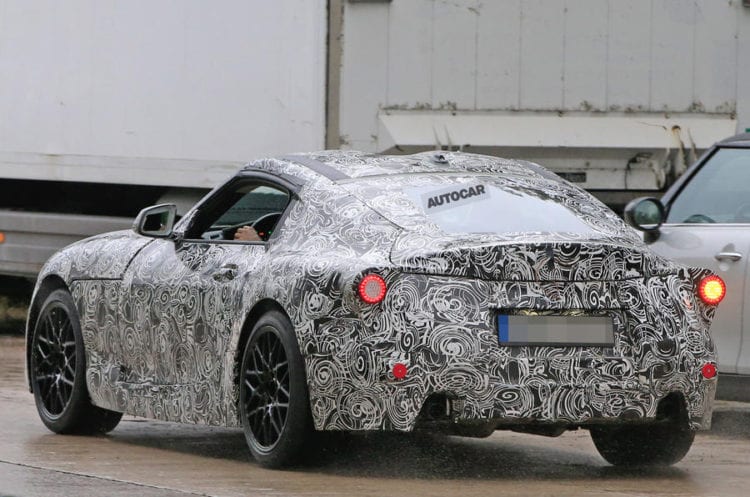 The new model might also have a performance hybrid version like the 2013 Yaris Hybrid-R which featured a 414bhp set-up with a 1.6-liter, four-cylinder petrol engine and an electric motor on each rear wheel. The 2017 Supra will have already mentioned super capacitor which was originally intended for Toyota TS030 Hybrid Le Mans and will feature some of the technology seen on the Yaris Hybrid-R.