Toyota Hilux, or its twin Tacoma in the US, are quite capable vehicles. Especially when we speak about TRD Pro version of US thing, which was actually used by US military several times testifying about its strength. But the Japanese company has already shown us in the past that it can go extreme, really extreme. In 2015 we had the opportunity to see what Tonka 4Runner has to present, and now it is time for Hilux.

2017 Toyota Hilux Tonka Concept is here to commemorate multiple things. First of all this year is the 70th anniversary of toy truck maker Tonka and 80th anniversary for Toyota. 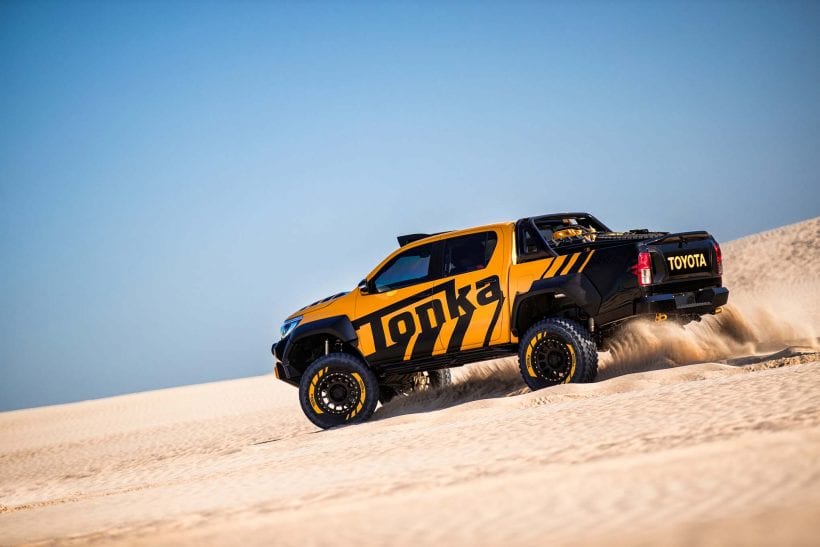 Further to that, Hilux has been sold in close to a million units from the introduction to this day in Australia, while global sales are at 16 million for now, and last year it was the best selling vehicle in Aussieland, which was the first time that title is taken by a truck. Plenty enough of reasons to make Australian audience entertained when this concept starts its tour around the country.

We know that this is Hilux based on headlights, but pretty much everything else is different. Hood is extremely bumped, covered in carbon and garnished with scoops, grille became honeycomb one, front bumper is exchanged by winch and hard-core protection plates, fenders are tripled in size. 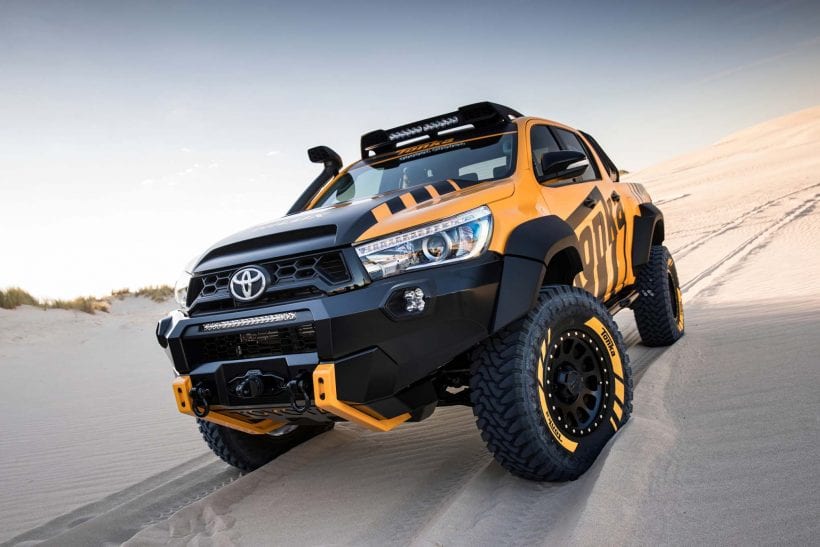 Furthermore, we have tube rails on the side, the tailgate is carbon wrapped just like housing air intakes, while the handle is replaced by the strap, and finally rear bumper is modified and feature a stair-like addition. The whole car is in black and yellow theme, yellow being the obvious remainder of Tonka toy trucks. Keeping in mind that this beast is significantly raised, whole this idea made Hilux into a really threatening off-road monster, something not shy to stand next to Ford Raptor or Ram Runner.

If we are about to talk about engines, you should know that under the bonnet is the best thing that you can get in Hilux’s diesel range for the Australian market, or the 2.8-liter I4 turbocharged diesel delivering 177 hp and 310 lb-ft. 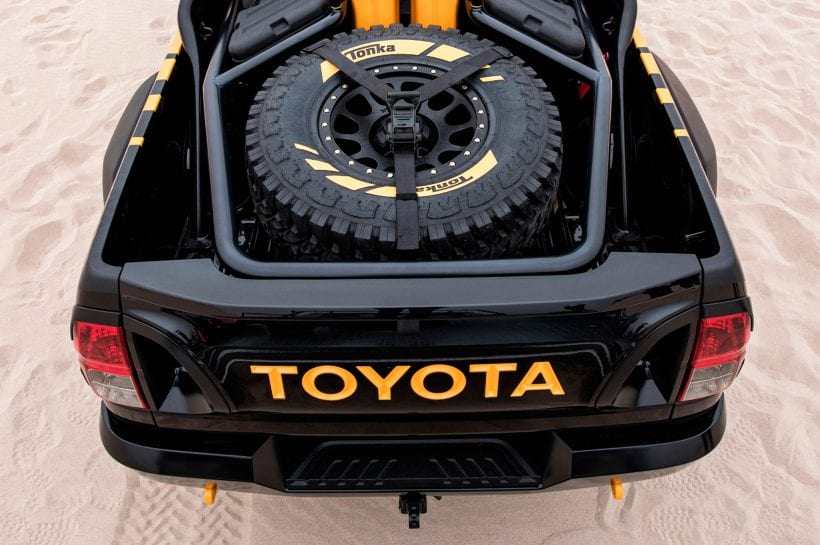 We can argue that things could have been more entertaining if under there settled 4.0-liter naturally aspired V6 petrol engine that’s boosting 238 hp and 277 lb-ft also in an offer by Hilux, but that didn’t happen.

OFF ROAD PART OF IT

Just by a simple look at it, it is quite obvious that this Hilux can pretty much go over anything that nature can throw at it. First of all, you can see immense ground clearance, 6-inch more from regular model, winch at the front, LED off road lighting, snorkel for tackling high water, protection plates that any rock can hardly compromise, and 35-inch hard-core off-road tires. Things that you might don’t see at first glance are heavy-duty suspension and high riding axles.

Plus to everything already said, at the rear, inside the bed, we have a special tubular frame, and whole storage area is filled with stuff necessary for survival in the wild, as recovery gear, shovel, ax, fire extinguisher, high lift jack and fuel cans. In conclusion, 2017 Toyota Hilux Tonka Concept would be an ultimate survival tool, and it is kind of sad knowing that it is never going to reach the streets, or actually sand, mud, and rocks in your hands.