Say what you want about Toyota, call them boring, uninspiring, but they sure know how to make a car reliable and durable. Some of the most satisfied customers drive a Toyota as a matter of fact. It’s not just that the customer service is great; it’s the fact that you barely need it that’s superb. They require very low maintenance and are the top 3 most reliable brands. It’s always been that way, and it doesn’t look like it will change anytime soon.

One of their best models is and has always been the Toyota Corolla. The “Corolla” moniker has been with us for around 50 years and is adorning more than 40 million cars worldwide. The span of the Corolla saw most vehicles basically as trouble-free, comfortable and economical, and even the spawn of some crazy creations such as the AE86. Yes, that’s right, every enthusiast’s favorite AE86 is basically titled a Corolla. The modern Corolla is, of course, a far cry from being a lightweight rear-wheel drive drift car, but its intended purpose as a city car is one which it fills extremely nicely.

For this year, Toyota has added the available safety technologies to the entire range of the Corolla, in an effort to increase the already great safety ratings of the small compact car. Although the ongoing model isn’t exactly anything special, it’s a lot better than the predecessors. The Corolla has always been and will remain a practical and economical car, for people just wanting the best and cheapest means of transport. 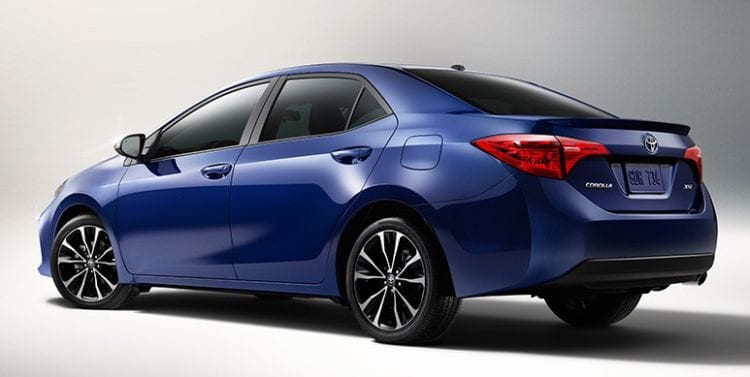 Effectively, the 2017 Toyota Corolla is the same vehicle, just like the last year model. There are almost no changes except the new trims, introduced especially for this year; they added a special 50th Anniversary Limited Edition. The special edition will only be produced in 8,000 examples available in just three colors. They’re not vastly different from the standard car, but do have a few exclusive bits. Things like unique and larger 17-inch alloy wheels, a special blacked out interior with stitching in “Black Cherry”, accents for the doors, the dash and even special badges scattered throughout. The only options are a power sunroof and an Entune Premium Audio System.

The design is not that everyone will like, but it’s a lot better than the previous generation and the awfully bland looking exterior it had. The overall shape is angular and kind of wedge-like, with angled creases, dents, and even headlights. There are LED headlights on all trims, and the sportier XSE trim gets a more aggressive black front grille with more dynamic fog lights, flanking from the air dam. There’s also a small rear spoiler giving the appearance of a taller rear on the XSE version.

Mechanically, it’s the same underpinnings and engine choices as seen on last year’s model. It’s basically a carryover from 2016, and we want to see upgrades in this department we are quite happy with what we are getting. The hood hides two different engine choices, both four-cylinders made for fuel economy and reliability rather than power and speed. Although they’re still nowhere near sporty, let alone quick, the engines in 2017 Toyota Corolla are better and offer a bit more oomph over the previous iterations.

The base engine is a 1.8-liter four cylinder developing 132 hp and 128 lb-ft of torque. IT will most likely power most of the Corollas. The second engine is a more powerful variant of the same displacement, 1.8 liters, but the LE Eco model sees it with added variable valve timing called Valvematic. As a result, Toyota was able to boost power as well as improves fuel consumption. In this guise, the 1.8 four-cylinder can develop 140 horsepower and 126 pound-feet of torque. We may see it in more models, not just the LE Eco, but honestly with very little improvements in power and fuel economy, and a decrease in torque it’s unlikely it will make a great deal of difference.
As far as transmissions go, the most likely choice amongst 90% of the buyers will probably be the CVT. It’s tuned for this year to provide a more reassuring feel and an even more linear and steady line of acceleration. Most of the work has been put into making it drone less, a problem which proved to plague previous gen cvts with their constant rev band being a nuisance on the commute. The basic models can still be ordered with a six-speed manual for anyone wishing to do so, but the ancient 4-speed automatic may see the ax soon. Avoid it at all cost, go for the CVT or the manual, those are far better choices. The CVT has been programmed to act as a seven-speed auto, even with paddle shifters behind the steering wheel to click through the gears (although not really). 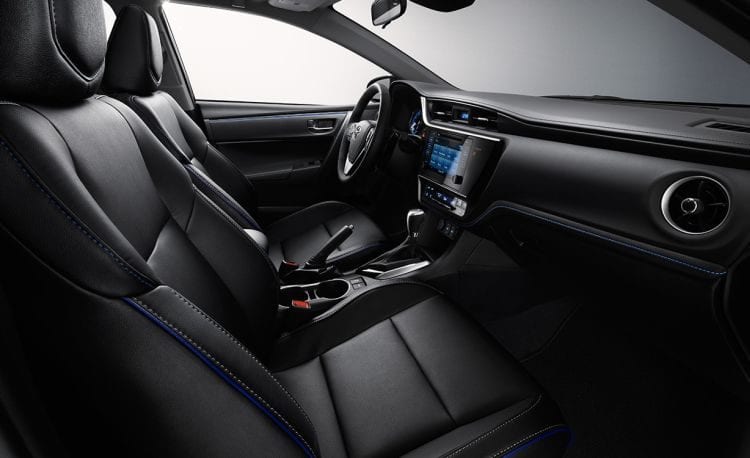 The interior is also largely unchanged and apart from the few differences we mentioned that are present in the special edition model. Overall, it’s not that bad, sure it brings plastic bits and pieces, and there are some rough surfaces, but on the whole it’s a lot better than its competitors. The design is uninspiring, but everything is where you’d expect it to be and works as it should. Each of the controls is logically laid out, and the entire cabin is just very ergonomic. It’s super user-friendly, making it even easier to use for the elderly people while others will get used to it much faster.

There’s limited cabin space as you would expect just looking at it from the outside, but in all honesty, it feels larger than it is. The use of minimalistic features and the lack of any kind of space consuming gadgets in 2017 Toyota Corolla mean it feels spacious on the inside, despite the fact that it isn’t. There’s decent amount of legroom and headroom in the front, and while the rear does retain the same legroom, headroom has been compromised due to obviously, the shape of the Corolla.

Prices have not been announced for the 2017 model, but considering the base price of 2016 at $17,300 we expect the new one to be around the same. It may not be your cup of tea, but if you’re in the market for a small compact, it’s definitely worth a look. If sporty credentials are on your list, then you’ll have to look elsewhere.