Toyota has quite a legacy in offering proper SUV models. When I say proper, I mean something that’s far from crossover term, something with old school body on frame chassis, something not afraid of dirt, mud, sand, rocks… The largest part of Toyota lineup is filled with those kinds of real off-roaders, just take a look at Land Cruiser Prado, Land Cruiser V8, Hilux, FJ Cruiser, Sequoia, and Tacoma.

One more player in the field of proper capabilities is 4Runner currently in the fifth generation from the year 2010. Special trim TRD Pro was introduced in 2013 on the US market, while these days Canadians are getting the same privilege to enjoy it as 2017 Toyota 4Runner TRD Pro is hitting their showrooms. 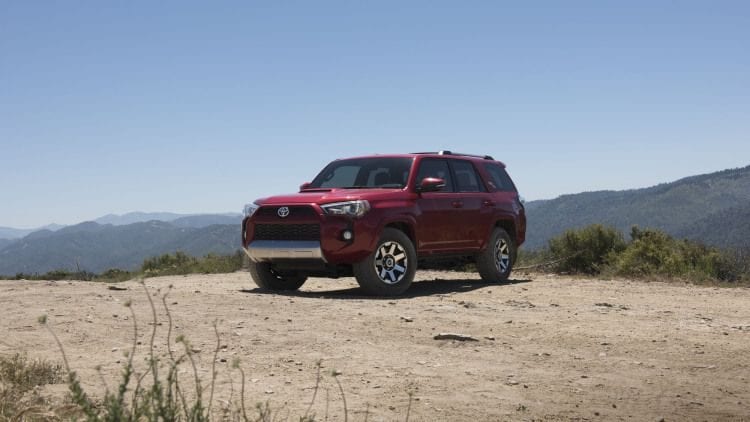 Because Toyota has two manufacturing facilities in Canada, that produced over 7 million vehicles so far, while currently in production are Corolla, Rav4 and Lexus RX. Toyota Canada Inc. owns 286 dealerships, and it has sold over 5 million vehicles in Canada so far. With all these facts question should be “why not earlier?”

With 2016 4Runner being transferred unchanged into 2017 MY you might be interested on reading our speculative review about imminently upcoming 2018 Toyota 4Runner.

4Runner carries incredibly boxy and sharp appearance displaying its capabilities visually. TRD Pro model takes it even further in seriousness with grille separator painted in black alongside front skid plate and accents at the rear, also featuring TRD badges on C pillars and tailgate, and a hood scoop.

In the cabin, special trim is visible on TRD shift knob and badges on floor mats and head rests, while every plastic insert is blackened. Black seats are featuring red stitching, same as those in the OFF-ROAD model. 4Runner cabin is interestingly styled, but due to the quality of the materials, it is visibly cheap. That shouldn’t fool anybody as this is proper off-roader not interested in soft plastic and leather coverings.

If you are looking for comfort, its prettier twin Highlander is a far better choice with monocoque chassis and significantly more luxury amenities, but in that case, forget about roaming through the forests.

TRD Pro model features the only engine in 4Runner lineup, and that is 4.0L V6 unit delivering 270 horsepower with 278 lb-ft of torque. This powerplant is paired with five-speed automatic transmission, and towing capacity is rated at 5,000 lb, which is impressive for mid-size SUV.

4Runner is an off-road beast. It can just tread through anything, while TRD Pro version ensures that it can do that without breaking a sweat and even go beyond as it features enforced front springs, Bilstein high-performance shocks with rear remote reservoirs and extreme Nitto Terra Grappler all-terrain pneumatics.

Toyota Racing Development or TRD has finally touched Canadian model and 2017 Toyota 4Runner TRD Pro and this might be something that many Canadians were waiting for. It turns this off-road beast in even sharper and meaner looking thing, making it kind of cool even on city pavement. Undoubtedly this vehicle has some funky glow around it, and it can prove irresistible even to some fancy city dweller in a similar manner Merc’s G class manage to do so.