Subaru is so hard to define. It amazed us by stuffing spicy engine under the bonnet of its estate wagon, making Forester outperform Porsche’s Boxter in the straight line in 2002, shocking us with Tribeca face in 2005, stunning us with hottest Impreza versions, all while completely boring us with unbelievably dull Legacy and regular versions of Impreza. So, it either amaze or leaves totally indifferent, rarely in between.

It stubbornly sticks to boxer units, making it quite an engineering rarity, besides Porsche in today’s market. In recent years Japanese company experienced quite blossoming in US sales, giving it enough space and funds to play with concepts and tease about its future. One of those things would be 2017 Subaru VIZIV-7 SUV Concept. 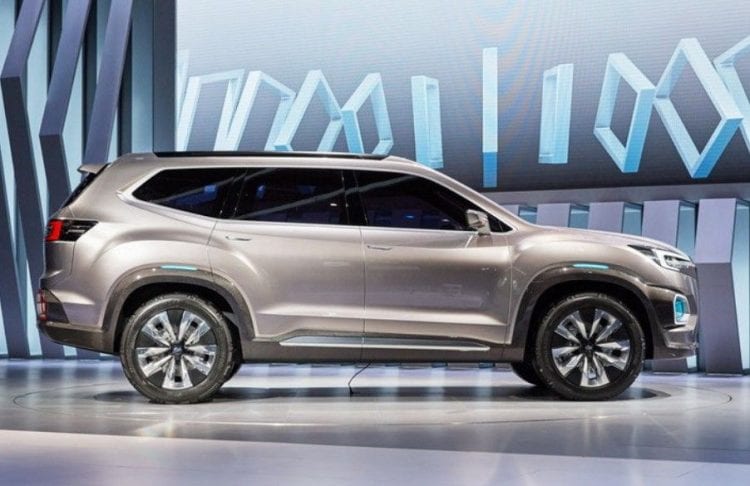 Subaru quite exploited Viziv name in recent years. In 2013 it appeared as highly attractive two door SUV with Lambo doors, but definitely too futuristic to be considered as a possible production model. Then in 2015 again appeared as two-(now conventional)doors SUV, with quite tamed look compared to the previous one, yet still attractive, seem as possibly close to production.

And finally came 2016 and our VIZIV-7 SUV Concept, showing what is going to roll-out from assembly lines in 2018. Subaru left empty space in its lineup above compact size crossover from 2014, so it would be nice of them to get back to the game.

Subaru entered mid-size SUV game in 2005 with B9 Tribeca. Most were shocked with intriguingly “ugly” fascia, or let us be polite and stick just with intriguing, so Subaru hurried and made it more conventional looking just two years after, also dropping B9 part of the name. It went from delirious looking to totally dull, as it just proves the statement that Subaru doesn’t know the middle ground.

That didn’t help at all and Tribeca finished its story in 2014 as one of the brand’s biggest failures at least in terms of sales figures. The market was harsh to this vehicle, even it carried nice thing under the hood, the 3.6-liter boxer engine rated at 260 hp and the fact that interior was incredibly interesting in its design at the time.

Our Viziv is companies new chance to enter larger SUV echelons once again, which is booming, so why should they missed it. The styling wise concept plays on the safe card, contrary to the predecessor, but it is far from plain. Quite large and imposing stance, determined grille, sharp lines and rugged figure are something that rarely fails with American buyers.

There are also enough cues to make it avoid appear as boring, as are curiously shaped LED headlights at the front and connected LED tail lights at the rear. Overall shape resembles Jeep Grand Cherokee, and we would count that as a good thing, as it affirms confidence. 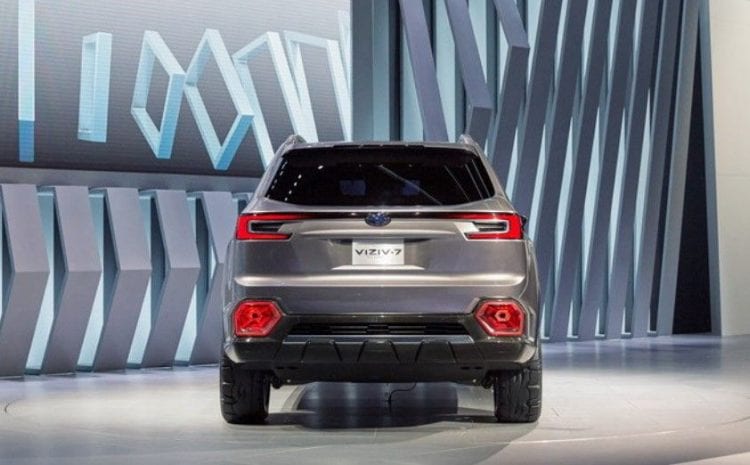 We group this together because both areas are totally unknown for now. The concept had blackout windows, and Japanese car maker hasn’t revealed anything, apart from the fact that the third-row sitting is going to be available. Forrester has quite unimaginative cabin, although solidly built, so Subaru should feel free to implement some extravagant thinking from old Tribeca at least in this department.

There are no hints about possible engines, and since strongest unit in Forester is 2.0-liter with 240 hp, we should expect a revival of something like mentioned old 3.6-liter that should go over 300 hp to stay competitive with rivals, and they can always insert another turbocharged and more powerful powerplant. On top of that, expect to see brand’s fantastic all-wheel drive is sure to be welcomed when it arrives.

If 2017 Subaru VIZIV-7 SUV Concept translates into production models keeping presented styling, and if cabin receives more imagination than current brand’s offer and if Subaru goes over 3,000 cc again under the hood (don’t exclude more powerful turbo unit), and it certainly will, we don’t see any obstacle for the future flagship to join current Subaru success story.