The recent years have brought a lot of good news for fans of the Subaru: new models were introduced, and the existing ones were redesigned and upgraded. Among all the news we find Subaru Impreza, a very popular compact sedan that received the new design for 2017 year. Almost two years ago, the manufacturer showed the concept version of the Impreza in Los Angeles, causing a great response from the fans of the Japanese brand. Most of them were said that the new model would help the company to stay afloat and competitive in the crossover era and revive the compact segment, which has been less active in the recent years.

Indeed, a new car can accomplish all these things because it has already broken the record of the yearly sales in 2014 with a month remaining (this is the latest info we received), accounting for more than 513,693 vehicles sold before the start of 2016. Moreover, the model is the main revenue generator along with Outback and Crosstrek carlines.

Finally, the latest generation Subaru has been unveiled at the 2016 New York Auto Show. The vehicle still is a four-door compact and uses a lot of new features that enhance its performance, but the automaker also provides a five-door hatch version, also shown in New York. 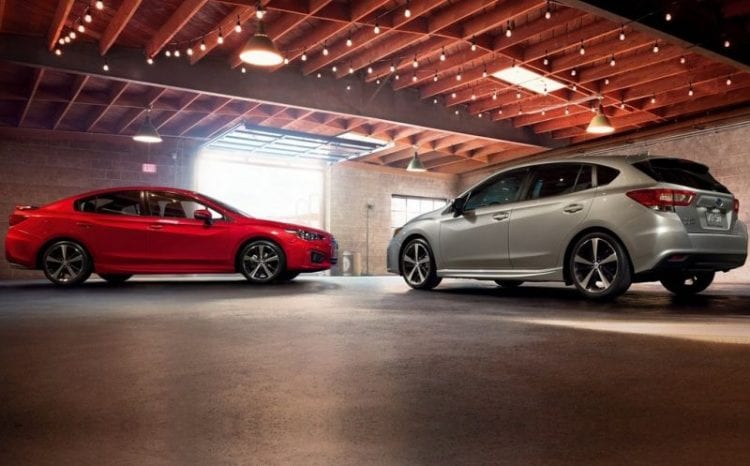 Having reviewed the specs of the new Impreza, we immediately saw that the manufacturer had done marvels with it. The two years since the concept release were spent undoubtedly in a great effort to make the model better in every possible way because the result is redesigned car inside and out. The new features wait for us in the safety, fuel economy, engine, and exterior departments. It is simpler to say what segments did not get any upgrades, but we can’t find any.

The body of the fifth-generation Impreza slightly resembles the one we saw in Los Angeles two year ago, but some of the elements are significantly toned down. The front of the vehicle, for example, has maintained some of the concept cues, such as new bumper, grille with a new mesh, and redesigned side vents. The vents have been added with small black inserts but the chrome trim, which was present on the concept vehicle, is gone. As for the headlights, their shape was changed to be more aggressive, but the C-shaped LED pattern was lost.

The view from the side of the vehicle reveals its similarity with the concept car, especially regarding rear haunches and arched front fenders. Subaru apparently could not afford to stay away from the sporty design on this one, so the designers gave the vehicle a more athletic waistline that provided it with a little bit sportier stance than the previous generation. The side skirts also look very sporty and in combination with the massive wheels give the even more aggressive appearance to the new Impreza. 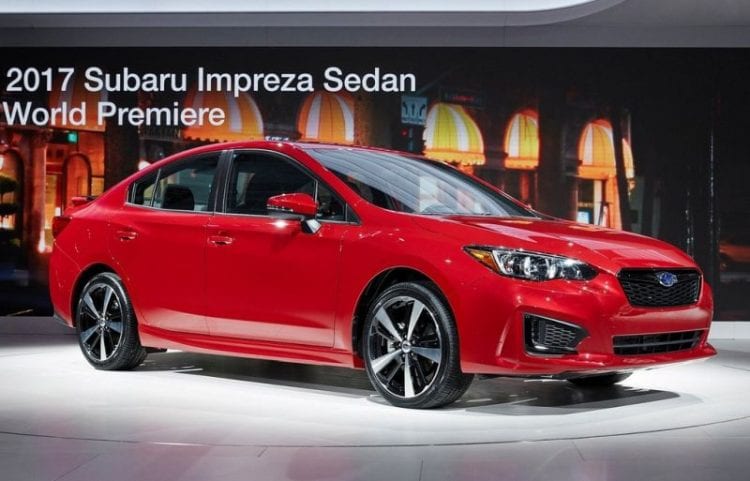 The rear has some great changes as well, including the new bumper and taillights. They effectively complement the overall design and make it look consistent; the designers also decided to keep some of the concept’s rear elements, such as taillights, which are now slightly larger, and the license plate recess, which was made to be thinner and longer than previously.

Overall, the new 2017 Subaru Impreza appears fresh and updated, and its fairly aggressive appearance combines the elements from the concept resulting in very attractive and appealing shape. Moreover, this version of Impreza is perhaps the most sportier than any model before that came with this badge. Good job, Subaru designers. 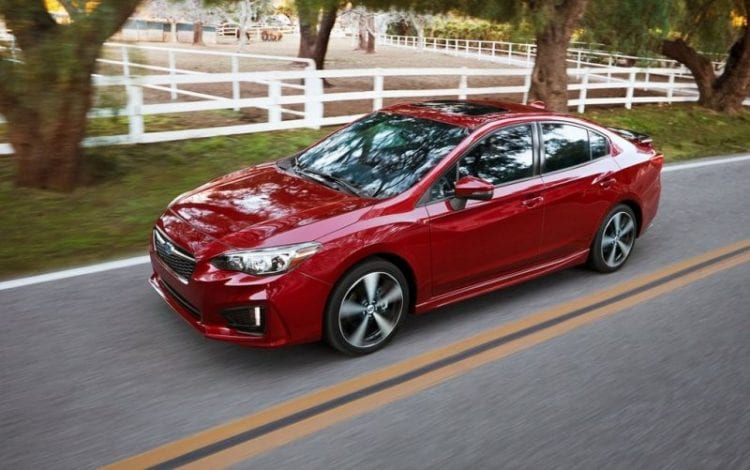 The same could be said about the cabin, which also looks really fresh and updated. The first thing that we noticed is a great dashboard that has those multiple layers with new and larger A/C vents. There is a large infotainment touchscreen that features the latest StarLink technology, with a futuristic design and many quite useful options. The automaker provides a standard 6.5-inch display as standard, but the customers can get an optional 8-inch unit. In this version of Impreza, the infotainment controls were repositioned and moved below the screen.

There is a lot of high-tech stuff included in the cabin as well. In addition to the great infotainment system, the vehicle supports Apple CarPlay, Android Auto, and Near Field Communication connectivity. These features were not available on the previous generations, so this one took a huge step forward in this regard. Moreover, Impreza has a premium sound system, Keyless Entry, leather-wrapped steering wheel and shift paddles.

Again, good work on the interior. 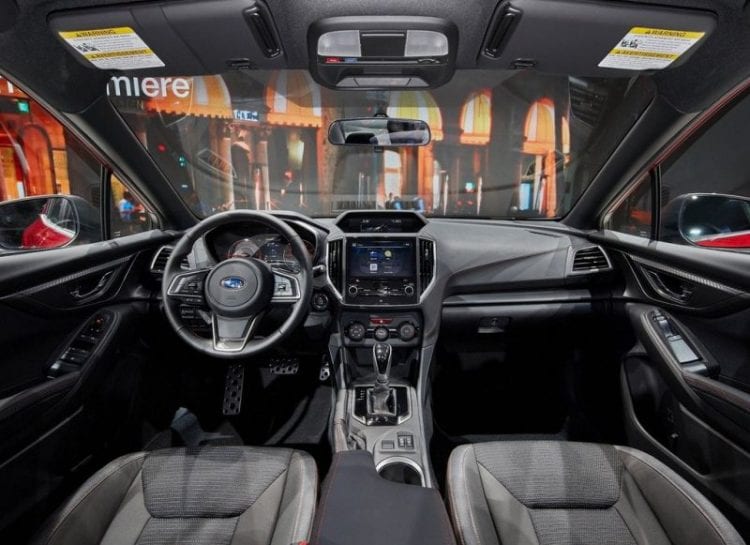 Before the vehicle was unveiled, we expected it to be offered with a great selection of powerful engines, which is a popular offer among the modern automakers. Subaru has partly met our expectations: the company has given the model a redesigned version of the 2.0-liter boxer engine that has one option that was absent from the previously offered powerplants: direct fuel injection. As the result of this innovation, the total output of the unit was enhanced to 152 horsepower. We are not quite satisfied with this change as we got used to more powerful options in range and if you want more power and better performances be prepared to go for some of the higher trims and different models in Impreza lineup, but this is a story for a different article.

The company did not say anything specific about the transmission, but some officials hinted that the model will be using a Lineatrinic CVT, which has seven speeds while the base will be the five-speed manual transmission. According to the manufacturer, the new Impreza will be built on the new Subaru’s Global Platform that lowered total weight and contributes to better fuel economy, performances, and driving dynamics. 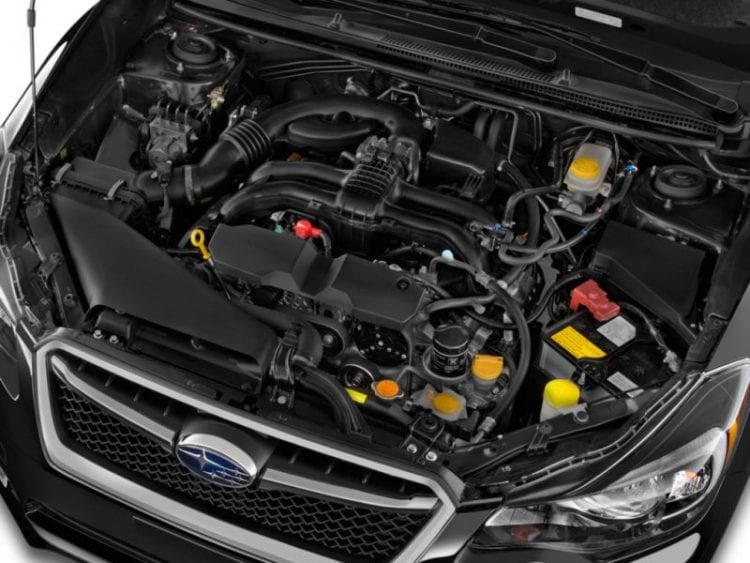 The platform mentioned above is known to improve crash energy absorption by 40 percent, which is a significant step forward for Subaru. A lot of other safety functions are offered in the model, including Rear Cross Traffic Alert, lane departure alert, numerous airbags throughout the cabin, adaptive cruise control, lane keep assist, blind spot detection, and automatic pre-collision braking, and many more others. 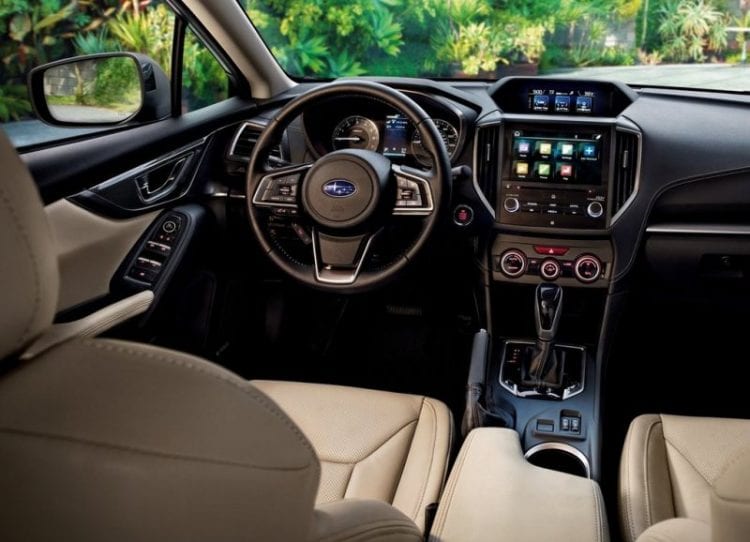 Although we do not possess the precise information about the pricing of the new Impreza, we think it is safe to assume that its price will start from under $20,000. Given that the previous-generation model costs from $18,295, it is a decent prediction. Just like with every major upgrade prices are bumped up, but it is obvious that Japanese car maker does not have a lot of space for the increase. There are four trims that will be provided by the manufacturer, including Base, Premium, Sport, and Limited, but it remains to be seen which will come to the sedan and which to hatchback version. The additional features in some of these trims will add several hundred to the starting price.