There are a couple of interesting things about, on first glance uninteresting Forester. It was introduced in 1997, and it represented some progressive thinking from Japanese at the time. It was basically estate wagon, but with SUV styling bits, something that could match Audi’s Allroad and it was introduced two years before the first A6 with mentioned designation came.

Also interestingly, upon introduction of the second generation, you could find under the bonnet of 2.5 STi model same engine that was used in Impreza WRX STi version, so this station wagon had better acceleration time than Boxter, and it was pretty close to 911 in those days, nothing short of impressive. As the time have passed it changed shape to some degree, and it more resembles classical crossover SUV now, and it just received a refresh, so let us review 2017 Subaru Forester. 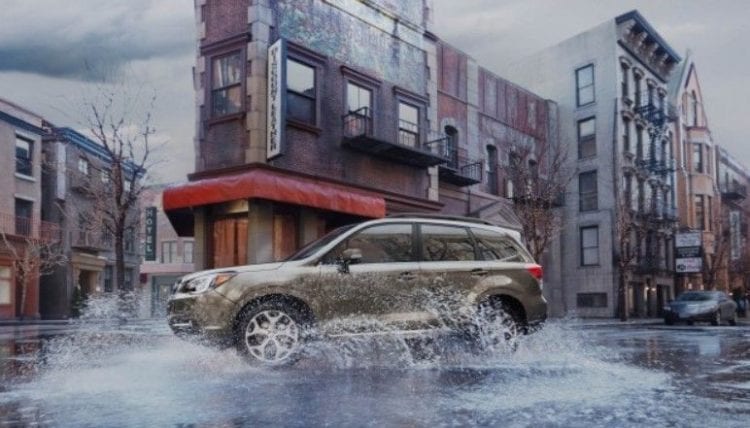 Subaru has very rarely gone berserk with styling direction, apart maybe from B9 Tribeca, which was later quickly redesigned and brought back to the world of ordinary. It is the same philosophy with Forester and this refresh sticks to it. Current generation went into production in 2012 and upgrade in question still tries to keep its appearance up to the date, and it is doing its job very well.

Headlights feature different and more interesting configuration, front bumper brings more modern design around foglights and grille has slightly more catchy looks. The rear is unchanged apart from minor differences related to the tail lights. Overall it looks younger, but nothing radical is implemented, and that was Subaru’s idea all along.

Not much is changed here apart from new upholstery option with brown leather and contrast stitching which suppress the overall feeling of scarceness. Mentioned feeling is largely due to the simplicity of the design while materials and especially build quality are up to the task.

Equipment is generous, and even the base version features infotainment with the touchscreen capable of phone integration while higher trims include a 7-inch screen with better graphics. Space is one of its virtues, and that counts in cargo space with phenomenal 34 cubic feet or even 74 in the maximum configuration, which is undoubtedly class leading.

Base one is 2.5i which stands for 2.5-liter engine with 170 horsepower and 174 pound-feet of torque and it can be paired with six-speed manual transmission or CVT automatic. It takes 9 seconds to 60 mph which is barely average, but it isn’t hard on fuel as it allows good 28 mpg combined. Times of beating Boxter in a drag race are gone, but there is still the hot option with 2.0 XT turbocharged unit delivering 250 hp and 258 lb-ft of torque, enough for 0-60 mph sprint in just 6.3 seconds.

Mentioned acceleration time is actually just slightly worse than the one from the second generation but in the mean time Boxter evolved, and any comparison looks ridiculous. On the plus side spicier version still, has decent fuel economy with 25 mpg combined. Signature of the Subaru is present, and all version come with AWD.

2017 Subaru Forester is a continuation of the same story with minor nip and tuck. It looks more modern, but the idea of simplicity stays the same. If you don’t want to be under the spotlight, if attention makes you uncomfortable, if you prefer capability over styling, this is one of the preferable choices in the segment.