Renault has done a great job with Zoe, it chose to transform little city car into EV, while most rivals stuck to the compact size. The price was its most alluring feature and it easily became best the selling electric car in Europe. Zoe is futuristic with its powertrain, trendy in its looks, and also cute, but it is far from being a fast thing with the power of 92 hp. Yet, French let loose their imagination, dealing with last part of previous sentence and Geneva housed 2017 Renault Zoe e-Sport Concept. 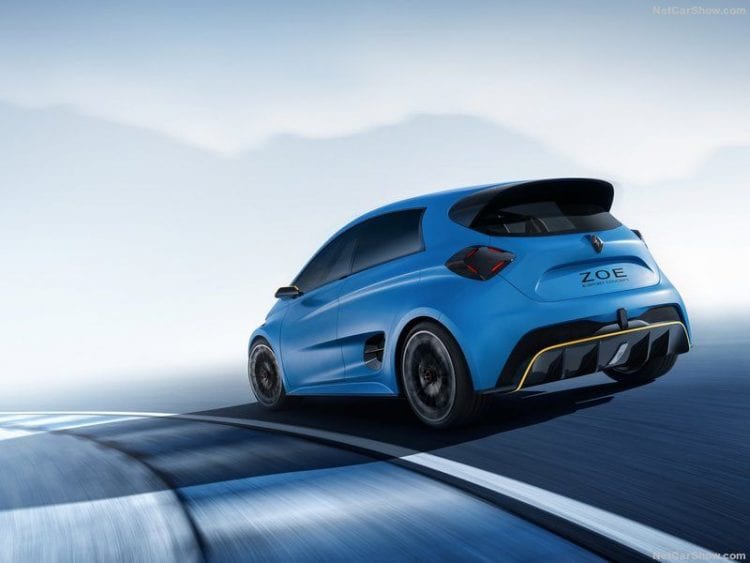 Zoe is supermini-sized and yet Renault managed to make it menacing. Vicious headlights and abnormally huge air intakes on the front, followed by nothing smaller rear diffuser, carbon fiber side vents, more than just big roof spoiler and oversized 20-inch alloys. The cuteness of rear lights is covered by black plastic and mysterious yellow line circle on both lower bumper parts and cover the mirrors. Combine that yellow with blue exterior color and you’ll get it is the homage to Formula E.

Zoe e-Sport didn’t borrow Clio cabin; this Zoe borrowed F1 cabin. Rectangular steering wheel, a couple of switches and gauges, Recaro bucket seats and everything else is stripped out, including rear seats, which are non-existing. You don’t even have door handless, straps instead, but you do have aluminum pedals. We already get it from the exterior that it is all about racing here and the cabin is just here to complement the idea.

Regular Zoe is possibly overly sluggish, but this concept… We have two electric motors, one on each side, with joined power of 456 horsepower and 472 lb-ft of torque. Let’s just stop for a second and look at that 456 hp figure. That is more than double the number that we usually find in hot supermini segment. Take Fiesta ST or Clio RS, both featuring 200 hp, so we are not sure whether this Zoe could be manageable in reality even with its AWD, probably not… 0-60 time is 3.2 seconds, which is supercar territory obviously.

Besides tremendous power, Zoe e-Sport has some more “way out of its class” stuff. Let’s mention carbon fiber body, making it weigh 3000 pounds, but keep in mind that much of weight goes to large 40 kWh battery, while at the place for dampers we have Öhlins adjustable ones, pretty much same as in R.S. 275 Trophy-R. And do get this, you have double wishbone suspension, front, and rear. Was that strange to pronounce with some city car together in the same sentence? 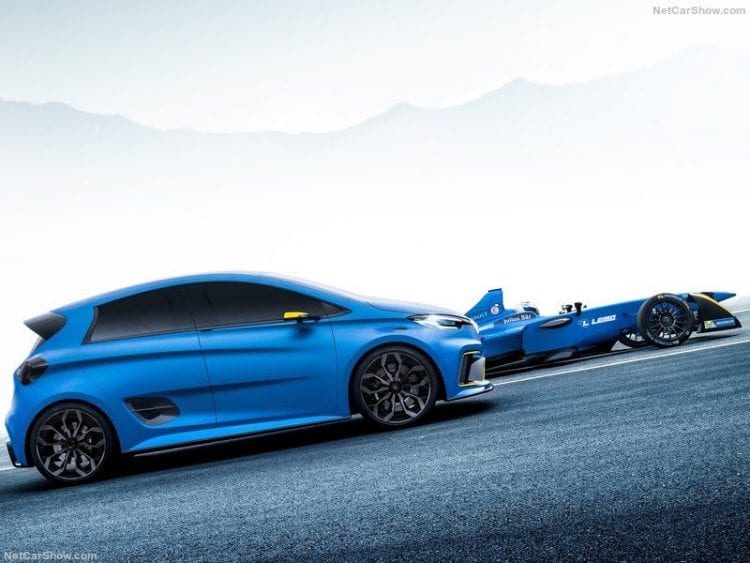 AND IT’S NEVER GOING TO HAPPEN

Well obviously. 2017 Renault Zoe e-Sport Concept is never reaching production as much as its powertrain sounds incredible, and nor it carries some design cues for future models. Does it have any purpose then? Maybe it is here to show that every car has its dark side as every human does. It is just that Zoe is never going to let its dark side prevail. So, why this now? Because Renault is currently biggest thing in Formula E, with the highest number of victories, so why not?