Land Rover took a big risk when they decided to make the Evoque. Historically in the past, Land Rover has been mostly known for making large off-road capable SUVs only, and that’s what made their reputation. Suddenly here was a small SUV offering from a company which had never built something similar before, and they even offered it in four and two-door versions.
Well, Land Rover is mixing things up again with the new Convertible version of the Evoque. Yes, you read that right. In the Evoque lineup, you can now opt for a convertible version. It made its debut at the Los Angeles Auto Show in 2015 and took the entire show by surprise. It was undoubtedly one of the biggest show-stoppers, and you can see why.

As good-looking as the Evoque was, the Convertible version manages to further enhance the exterior styling. Well, that really depends on who you ask but for the most part, people agree that it’s not bad looking and that it has some appeal to it. Despite losing the entire roof, the beltline and everything below remains the same. Structural rigidity level is same thanks to the rigid body and the windshield surround, ensuring this is just as tough as its fixed-top brother.
Unlike most convertibles which lose their attractive styling as soon as the top is put up, the 2017 Range Rover Evoque Convertible doesn’t have to face similar issues. A Z-type structure has been used in the power-folding soft top, giving it an elegant and sleek design whether the roof is up or down. There are tension bows in two specific areas of the roof to support it, enabling that distinctive shape which is one of the best things about the Evoque Convertible.

The doors feature a frameless design, so when we say it’s an open-top experience we really do mean it’s an open-top experience with no hurdles above, or to the side of you. Obviously, if you put the roof down you’ll be exposed to the environment, but pop it back up and you’ll find it’s well isolated from road and wind noise.
Apart from a soft-top, the Convertible has some small upgrades in addition when compared to the standard Evoque. The grille, for instance, features larger openings, and the front bumper is more aggressive on this version. The fog lights are now offered with LED technology, and the side skirts are body-colored. There are two trim packages with the Convertible version, the SE Dynamic, and the HSE Dynamic.

There’s no shortage of wheel choices with the available six different alloys on offer. The sizes range from 18 to 20-inches, and there are whopping 13 exterior colors to choose from. They range from subtle and understated to extravagant and in-your-face that will immediately attract attention. All depends on what do you want to achieve.

It’s no surprise that the interior is very similar to the standard version. Most of the convertibles borrow the entire interior from their fixed-roof versions, and the Evoque is no different. Interestingly, the Evoque Convertible is a 2+2 meaning there’s room in the back for adults, but we’ll get to that in a minute.
The front seats and entire dashboard are pretty much the same as the Coupe, offering a simple yet elegant design. The seats are comfortable, but they are very heavily bolstered, so anyone who’s a bit bigger may struggle to find their comfortable driving position, but it’s honestly not that big of an issue. If we do have any criticisms, they would have to be addressed to the bland looking colors, lacking any accents to separate them. There are a few aluminum trim pieces, but they’re not enough since this should be the luxury-oriented vehicle when we take a look at the price. 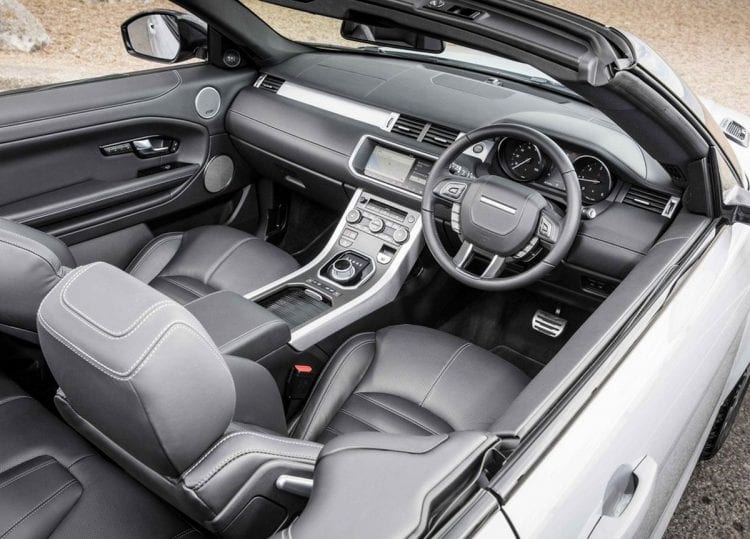 The rear seats are different from what we are getting in the standard Evoque because they can’t be moved around, they’re fixed to the car, and that’s their final resting place. Headroom for back passengers isn’t an issue, but legroom may be, especially for longer journeys. Still, there is a lot of cargo space, 8.9 cubic feet in fact. It may sound like a small amount, but when you consider how much room the roof takes up it’s not that bad. There is a price to pay if you want to buy convertible version.
On the infotainment side, there’s a massive 10.2-inch touch screen. The resolution has been improved, and it’s now 1280×542 pixels which really makes the difference. A system called InControl is responsible for the infotainment side of things, and it offers Wi-Fi which can connect with up to eight devices. A Meridian 10-speaker audio system takes care of your favorite tunes, and the sound produced is as smooth as any other high-end setup. If that’s not enough, you can opt for 12 speakers premium system. 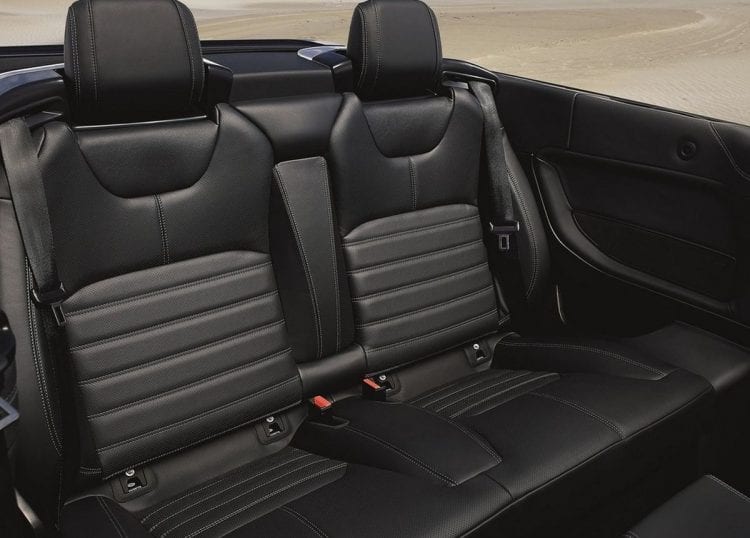 Power comes from the same 2.0-liter four-cylinder unit. It develops 240 hp ad 251 lb-ft of torque which is a decent amount of power for a vehicle of this size. Thankfully to smaller size engine that is turbocharged it will improve fuel efficiency and lower CO2 emissions. When we combine aluminum construction with direct fuel injection and VVT, we are getting one quite technology rich and modern power-plant. The engine is mated to a ZF-sourced nine-speed automatic transmission with the option to control it manually through the paddles behind the steering wheel. 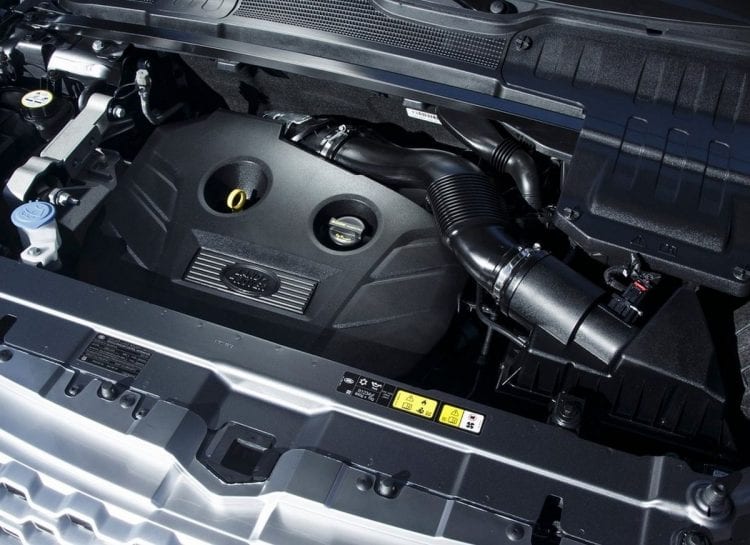 The ZF isn’t a particularly sporty transmission, but neither is the 2017 Range Rover Evoque Convertible. As such, it manages a respectable time of 7.8 seconds in the sprint from 0 to 60 miles per hour. The top speed is electronically controlled and limited to 112 mph and to be honest you do not need more, but we rather get a vehicle without any restrictions like this.

Although it’s a convertible, off-road capabilities, haven’t been compromised in the slightest bit. The excellent Terrain Response system we know and love from Land Rover is present here, and it’s working together with the standard four-wheel drive system which we might add, is always on. The Terrain Response modulates the steering, throttle, brakes and traction control to aid you depending on your chosen mode of operation from the selectable settings. Don’t forget that there are Hill Descent and Hill Start Assist systems present onboard too.

It might be unconventional for some, but we truly like. Prices start at $50,400 for the base model, but we think it is worth it if you have that kind of money. Just be careful not to go overboard with the gadgets since the price can easily get into the $60,000 mark.