Ram is an important model lineup for the American brand. One reason is the popularity of pickup trucks on that side of the world, and other is its sales volume. It sells well, not as Chevy Silverado, or let alone Ford’s F150, but going above half a million units annually is quite a thing. Dodge gave special treatment to Ram in 2010, making it a separate brand. Since mid-size truck Dakota has ceased to exist in 2011, while Ram 700, 1200, ProMaster and ProMaster City are just a rebadged version of other vehicles sold mainly in one specific market, our true-blooded Ram is currently only proper Ram model and hence the most important one.

The current version was introduced in 2008, and that might be a problem, because, besides Toyota Tundra, which is even older, all other rivals are substantially younger than it. Until new one arrives, we have an opportunity to play with some of its special editions and 2017 Ram Power Wagon is one of those. 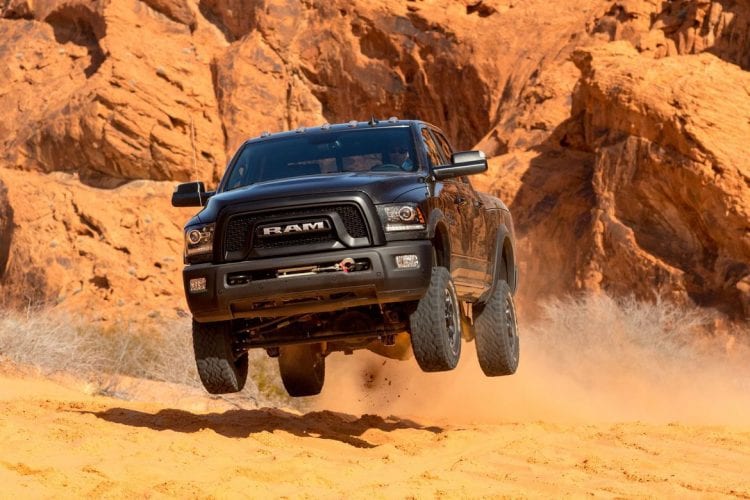 Power Wagon is special offroad edition based on Heavy Duty 2500 model with some further improvements. If you thought that Ram 1500 is good offroader, you would be right, but this thing… it can swallow up nature without breaking a sweat. It doesn’t know any compromises, so go for it only if you know what you want. Both axles are solid, so forget about ride comfort while the only transmission choice is heavy duty 6-speed automatic, followed by Borg Wagner two-speed transfer case allowing low range gear selection. It has proper 4WD offering everything that you can possibly imagine or ask from one off-roader.

To be the ultimate machine, Ram decided to bring locking differential, but one for each axle, which means you can lock each of four wheels, besides that it carries disconnectable front sway bar and Warn recovery winch capable of pulling 12,000 pounds. Special thing reserved solely for it would be Ram Articulink design allowing axles to move further with 3-inch raised ground clearance.

Don’t be afraid of approaching angles as far as 33.6 degrees, you can hit break over angles of 23.5 degrees, and departure from one of 26.2 degrees, while capable of submerging to water up to 30 inches without hurting yourself. 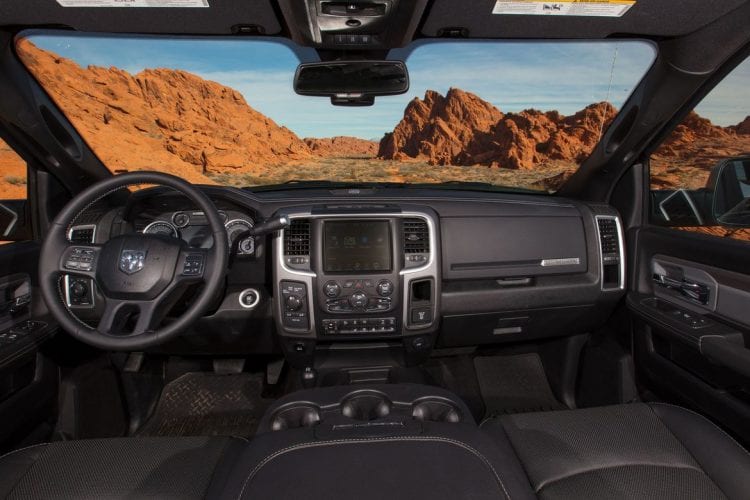 For the year 2017 Power Wagon received some styling changes, and if we have to squeeze them into one sentence, it would be “chrome to black.” In that manner previously chromed grille is now black and shaped same as with Rebel model, both front and rear bumper are suddenly darkened out also, as well are the 17-inch alloys. The truck also features new graphics, and we would say more tasteful ones this time. Overall all that blackness suits its intimidating looks and makes it distinctive enough from regular models.

Interior fits the one from the regular version, apart from some Power Wagon Logos and special visual pattern for seats. There are two trim levels, Tradesman and SLT and both of these feature folding center console allowing seating for six people. SLT trim carries as the standard 8.4-inch Uconnect system as well as 7-inch TFT display within instrument cluster.

One, but a mighty option. We are talking about 6.4-liter Hemi V8 engine delivering 410 horsepower along with 429 pound-feet of torque, while also utilizing variable valve timing and cylinder deactivation in an effort to, at least try to, save you from bankruptcy during pump visits. Sadly Cummins diesel hasn’t found its way here as mentioned Warn winch occupied the place where engine intercooler is supposed to be.

Don’t worry as discussed powertrain is enough to push this heavy beast to 60 mph in 8.4 seconds and considering its nature it’s more than decent.

2017 Ram Power Wagon SHOULD YOU

2017 Ram Power Wagon starts with $47k base price and ends with over $51k. That is a lot over the standard version that goes from $26k for 1500 model and over many models in between. That’s why you need to know what you are looking for and what you are getting into with it. If you want a truck to cruise the city streets, to appear masculine when commute or drive you childer to school with it, then forget about 2017 RAM Power Wagon, this is a working animal with just some added jewelry.

If you desire to get outstanding off-road and working capabilities of 2500 model stretched even further, while also spiced up with some brutal design cues, making your “coworkers” or “cofarmers” envy you, this is the thing for you.