With all the different versions and special editions of the 911 it seems like the 997 was released just a year ago. Well, Porsche are back at it again with the 911 R, a car for people who love the 911 GT3 RS but would like a bit more involvement. So, what will it be like?

Well, needless to say, it will have a manual transmission. This much was immediately expected as any self-proclaimed enthusiast car must have a manual as an option at least. The 2017 Porsche 911 R is basically a 997 generation GT3 RS with a manual gearbox. It uses the same chassis and engine, albeit the big rear wing in the back isn’t there and it’s different in a few more areas. 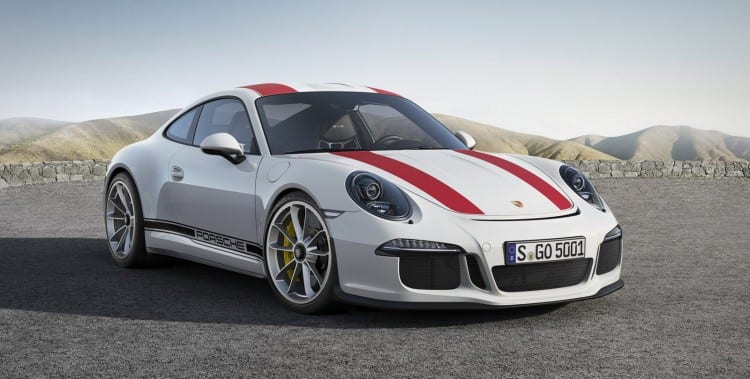 Other than some different tunes we’ll cover later in the article, it’s virtually a GT3 RS. Front and rear bumpers are the same, and so are the fenders. The wheels, skirts, and mirrors are identical to the ones found on the RS too. The only considerable detail separating the R from the RS is the engine cover, which now has a normal grille and retractable wing like the one found on the standard Carrera model.

The R is extremely light. The front hood and the rear engine cover are made from carbon-fiber, saving a few pounds. The roof is of magnesium adding to the weight-saving diet. The R weighs 3020 pounds, making it 110 pounds lighter than the RS. This means the R is the lightest 911 at the moment.

Visually, the car is a RS minus the big wing. There will always be those who don’t like it, and those who will. The modern-day 911 is a really understated looking car. For some that’s a plus, it shows the evolution of the 911 in the last 50+ years of its existence, while for others it’s just a 911, with looks very similar to the old one. And perhaps they’re right. Half of the people still don’t know the difference between the 991 and 997.

Love it or hate it, it’s here, but less than 1000 units will be made so if you’re one of those that love it, order it while you still can (if it’s not sold out already). The color and decal arrangement is reminiscent to that of the original 911 R, with decals just above the side skirts on the doors and green or red racing stripes. The stripes are a removable option and anyone doesn’t want to stand out that much can tick this box when filling out the order paperwork.

The interior of the R shows the car’s intentions as well. The rear seats are gone and the front carbon-fiber seats are wrapped with the tartan cloth. The air conditioning unit and radio have been deleted too, along with the interior door handles which are now replaced with pull straps. Porsche has gone to great lengths to make this a track-ready car, and the fact that even the door handles were excessive enough to be deleted shows this. 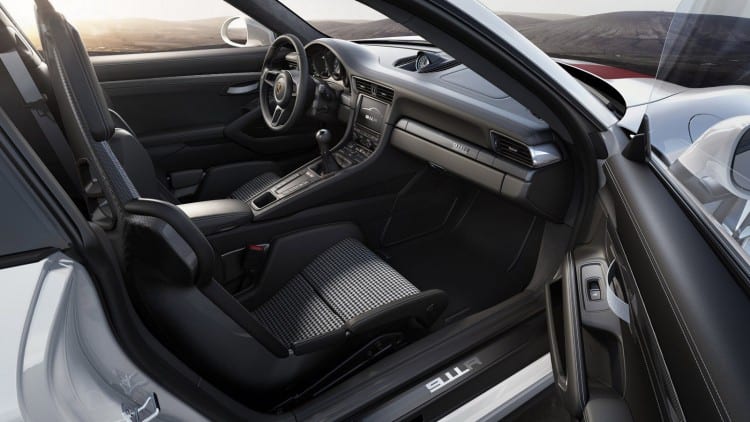 Elsewhere, there’s a unique steering wheel only fitted to the R model, and a special gear lever just for the mentioned model. The infotainment system was also customized for this version, and it’s displayed on the bespoke 911 R instrument cluster. As soon as you get in, seats will firmly hold you and you will notice accents that are a product of the special treatment that every 2017 Porsche 911 R model received. 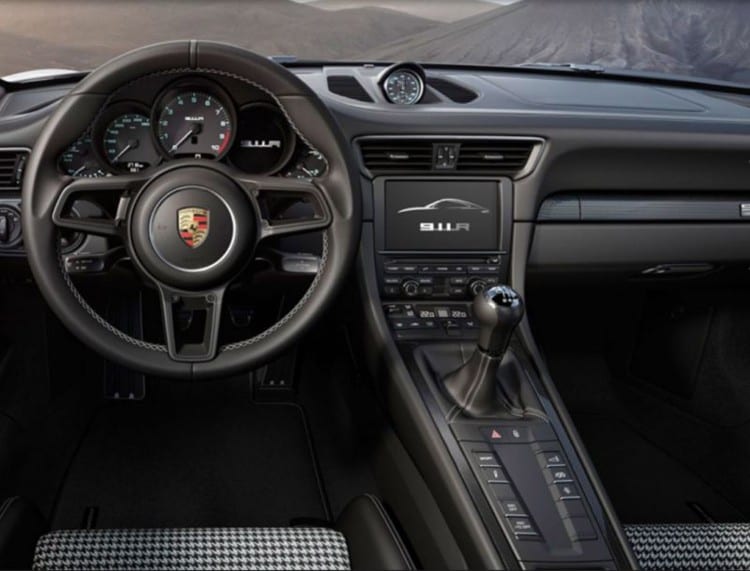 Rumors that the GT3 3.8-liter engine would be used in the R were disproved when Porsche announced that the car will come with the larger 4.0-liter boxer six-cylinder found in the GT3 RS. The power output of the 4.0-liter unit is identical to the one found in the RS. At 500 horsepower and 339 ft-lb of torque, it can easily propel the car to insane speeds. In a world where people were disappointed that the GT4 didn’t come with the GT3 engine, having the enthusiast R fitted with the RS engine is a pleasant surprise from Porsche.

If there’s one drawback to the manual, it’s slower acceleration at the expense of more driver involvement. Simply put, gear changes with manual transmission are much slower than in the case if you opt for the automatic transmission that Porsche offers. Sprint from 0 to 60 mph is achieved in 3.7 seconds, 0.4 and 0.6 seconds slower than the GT3 and GT3 RS at 3.3 and 3.1 seconds respectively. Top speed is a different story, however. The lack of drag resistance from the big wing which is missing here and the weight savings from the manual transmission result in the 200 miles per hour top speed, faster than both of the GT3s by three and five miles per hour. 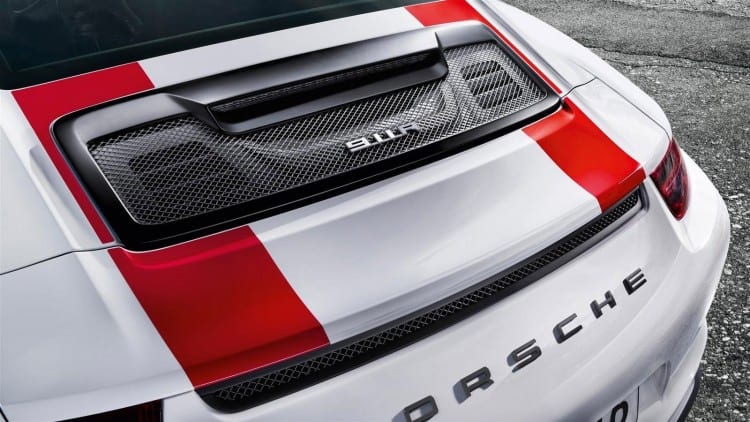 Obviously, you can’t just remove aero parts from a vehicle and keep the same tune. For that purpose, Porsche tuned every aspect of the R to fit its needs. The differential lock, rear-axle steering, and suspension have been uniquely tuned. The R may use GT3 parts, but they’re in a different tune here, more suited to the R’s driving style and characteristics.

Not everyone can handle the 2017 Porsche 911 R at full potential, so to make that task easier the car is fitted with a double-declutch (automatic revmatch) function. The function automatically blips the throttle on downshifts, nailing every single gearshift exactly perfect. Among other features, this supercar has an optional lift system which can be specified. The system raises the car by 1.2 inches at the push of a button, enabling easy access to garage slopes, multi-storey and underground parking. 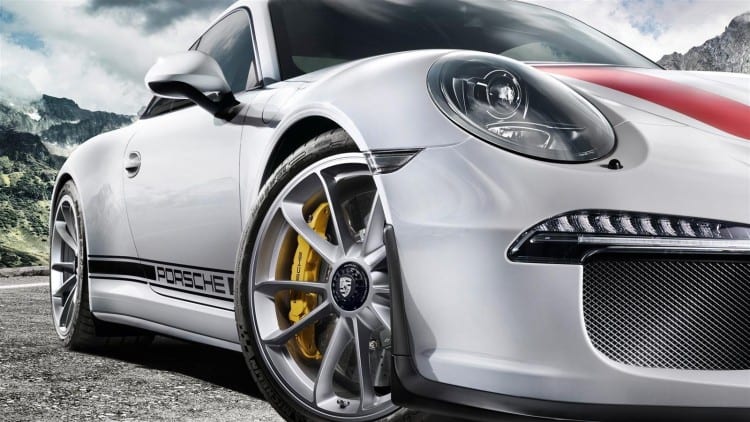 The 911 R’s main competitor is probably the Corvette Stingray. With a manual option and big 6.2 liter V8, the battle should be close. The feel they give the driver is nowhere near, however, one is a relatively inexpensive sports car, the other a timeless classic that will soon probably be a collectible. This reflects in the way they drive, but also the price difference most of all.

Speaking of price, the 2017 Porsche 911 R costs around $183,500, or $7,600 more than the RS. Only 991 R’s will be built, most of which are sold out if not all. The limited production number indicates that not only will this be the last Porsche enthusiast car for a while, but one that will soon be a collection item wanted by everyone. Expect prices to go up in the next few years, so if you have one, keep it safe but most of all, enjoy it.