The 2017 Porsche 718 Boxster will soon hit the market with updated look and brand new engine lineup, offering better performance and improved fuel economy due to turbocharging.

The original model was first launched in 1996 at it represented the company’s entry-level model into the mid-engine sports car territory. Actually, it was the first roadster Porsche built since they discontinued the legendary 550 Spyder. Pretty big shoes to fill then. 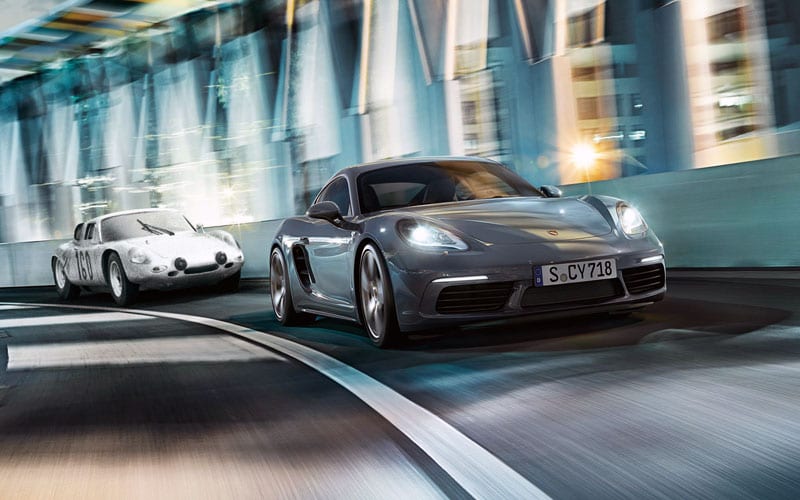 Unfortunately, it received lots of criticism right from the get go because of its slightly feminine appearance and less power than the 911. Despite this, it became Porsche’s most successful model until the appearance of the Cayenne in 2003. Eventually even the enthusiasts realized what a bargain the Boxster is and the complaints subsided. The Boxster wasn’t really big on facelifts (ironic, next to the 911 which receives minor facelift) but in 2016 it finally received the biggest update in around 20 years. 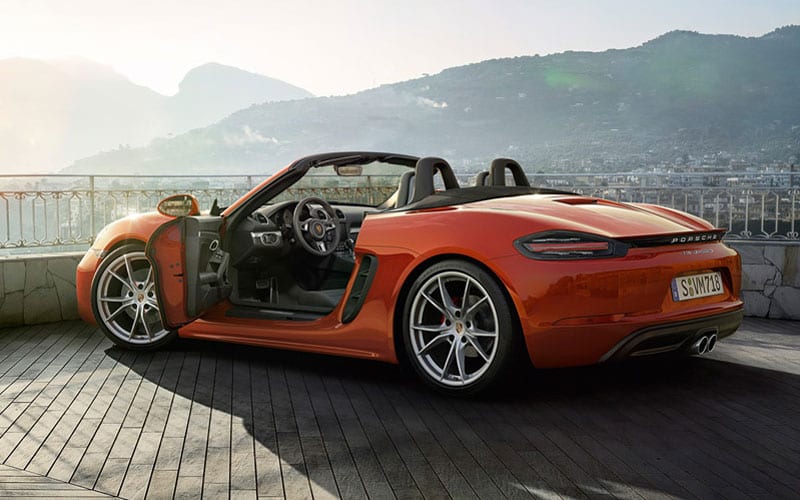 Following its bigger brother the 911 Carrera the Boxster implements similar changes under the hood but for the exterior and interior as well. More on that later on but for now here’s what you need to know: The new model will use the “718” moniker. The Porsche fans among you will now the 718 isn’t a brand new nickname, but rather one that the automaker used for sports cars back from 1957 to 1962. The reason for that particular moniker will become obvious later on. 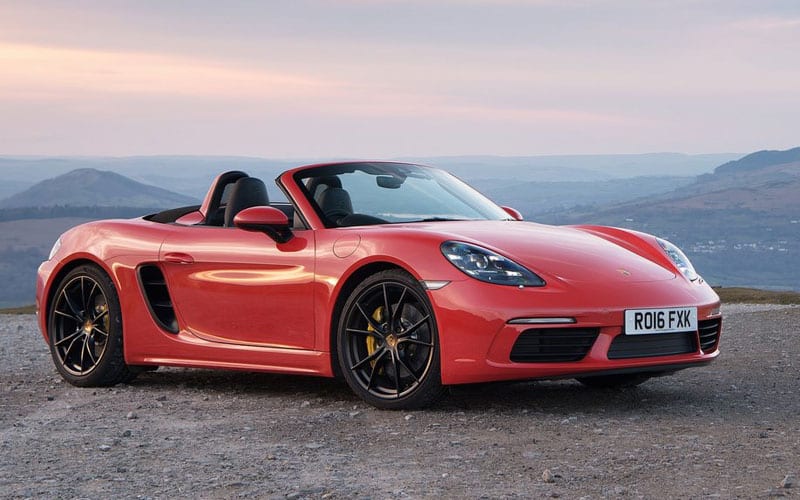 First of all, let’s talk about the exterior. Remember how we said it’s the biggest update for the Boxster since it was first launched? The reason being that almost every body panel on the new 2017 Porsche 718 Boxster (apart from the luggage compartment lids) is new. Everything has been redesigned, implying that this is more of a generation change rather than an ordinary facelift. Still, Porsche, sticking to their traditional methods, kept the basic shape of the panels generally the same, making the new model instantly recognizable. 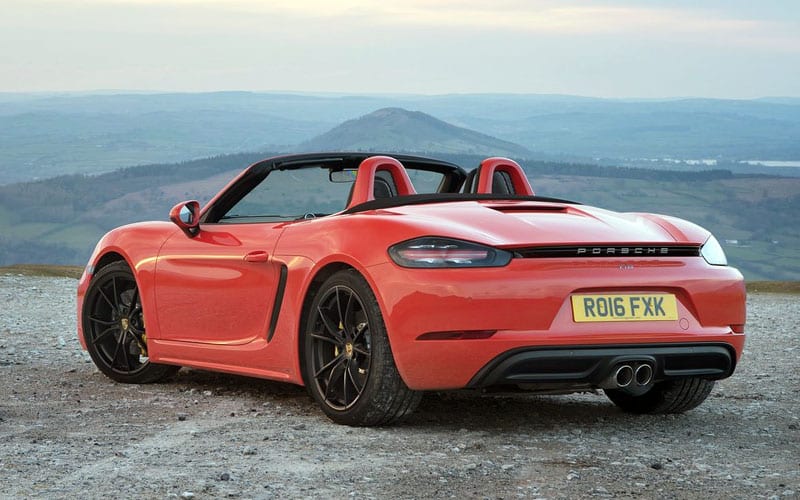 The bigger updates are as follows: a wider front end, a new bumper section, wider side intakes (which are also coincidentally thinner) and thinner LED daytime running lights. The lights are now separate from the vents rather than being an incorporated element in the entire assembly. The grille right below the license plate is reshaped and the bi-xenon headlights are now standard. As optional you have four-point DRLs which greatly improve night time vision. The DRLs make an appearance on the Boxster for the first time ever. Night really shows off their true potential.

Interior also receives changes. The dashboard and instrument cluster have been replaced and there is a new A/C unit. Other features include Porsche Communication Management, 10-watt Sound Package Plus, Connect Plus module, and optional satellite navigation with voice control. Now we’re finally getting to the juicy bit, the engine lineup. And what a surprise. Rather controversially, Porsche has decided to drop the flat-six engine and in its place now lays two new flat-four units. We say controversial because most of the enthusiast community has been generally concerned about noise and performance, especially since the new units were primarily designed for greater efficiency. We can assure you the four-cylinders are way better than the flat-six, as silly as that may sound. Let us explain. 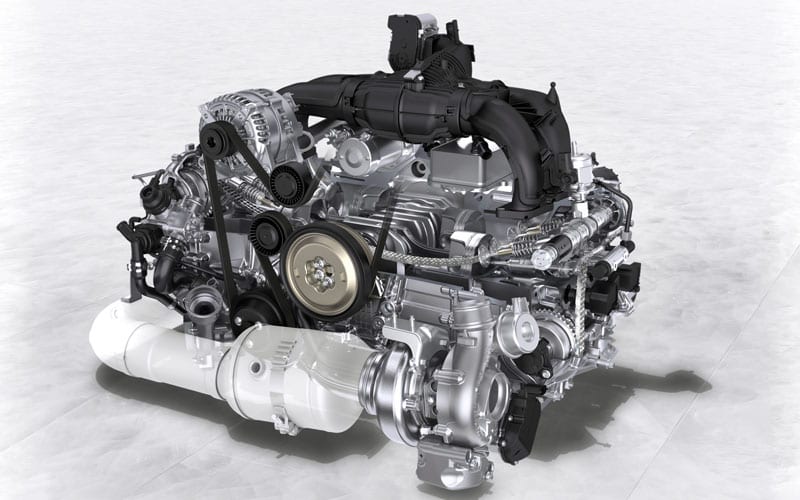 The standard engine is a 2.0-liter turbocharged flat-four developing 300 hp and 280 pound-feet of torque. Yes, you read that right. It’s a 2L engine in a Boxster. But, here’s the crazy part: those power figures indicate a 35 horsepower and 74 lb-ft of torque increase over the old car’s base engine. The hp increase is nice but the torque figure is just ridiculous. What’s more, because it’s turbocharged it’s around 15% more efficient. Now do you see why we’re completely in love with the flat-fours?

Next, we have the 2017 Porsche 718 Boxster S, the slightly more powerful, more expensive and sportier version of the Boxster. It too has had its flat-six yanked out and a 2.5L flat-four turbocharged unit has been bolted in its place. If you thought the 2.0L was powerful, wait until you hear the figures for the 2.5L unit: 350 horses and 309 lb-ft of twist. That results in 35 hp and 43 lb-ft of torque more than the previous S model. We’re just going to say it one more time: We love the new flat-fours! 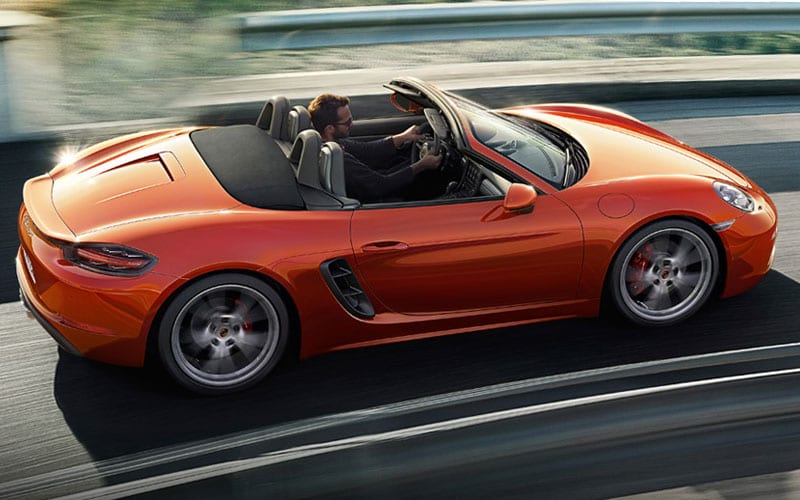 The extra grunt provided by the turbocharger enables the base Boxster to hit 60 miles per hour in 4.9 seconds with a manual transmission and 4.7 seconds with the PDK transmission. Add the Sport Chrono Package and you’re looking at 4.5 seconds to 60 mph. That’s 0.7 seconds faster than the last car, quite an achievement. The top speed has been also raised by 8 mph and now stands at 170 miles per hour.

The 2017 Porsche 718 Boxster S hits 60 mph in 3.3 seconds with a manual gearbox and 4.2 seconds with the PDK. Again, adding the Sport Chrono Package manages to reduce that number down even further, taking it down to 4 seconds flat. That’s properly fast. Top speed has been increase with the S as well and is now 177 miles per hour, bordering with supercar territory. 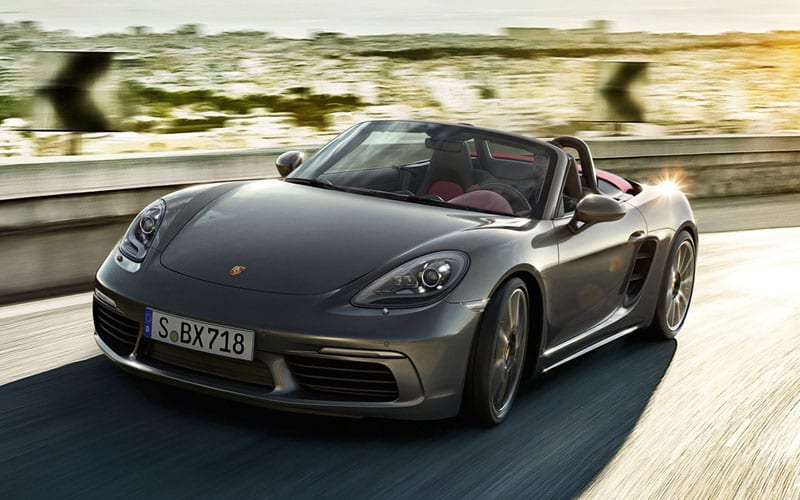 Let’s talk transmissions. The manual variant (the one you should get if you want maximum driving involvement) is a six-speed box, while the automatic is obviously Porsche’s brilliant PDK. The former is standard, the latter an option.

Following the 911’s selectable system, the Boxster’s Sport Chrono gets an Individual program with three different settings: Normal, Sport and Sport Plus. If you get the PDK transmission you’ll also receive a Sport Response Button in addition to the four modes. Press it and the car’s engine, steering and transmission get sharper and more responsive. 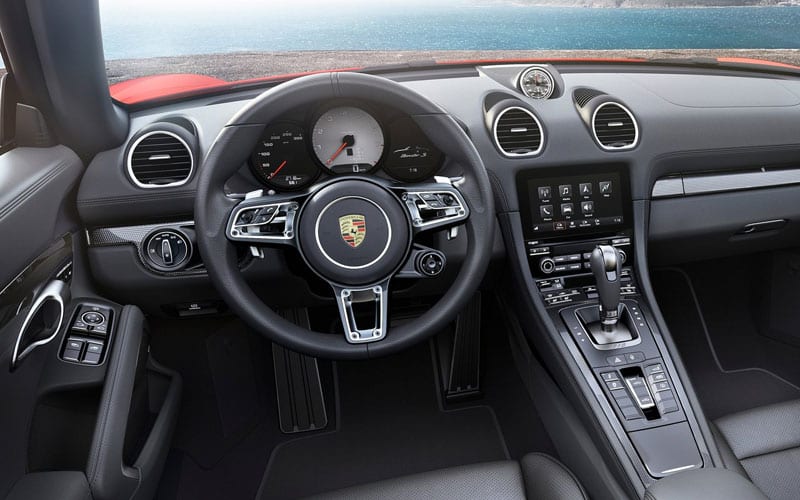 The handling is still one of the best we’ve seen in the sports car segment. The electric steering system is 10% sharper and the suspension is noticeably stiffer. The 2017 Porsche 718 Boxster can be equipped with the Porsche Active Suspension Management, lowering ride height when needed for maximum attack mode. Honestly it’s one of the best systems out there, offering plenty of comfort when you need it with exceptional cornering abilities when you want to have some fun. It’s often said that the Alfa 4C was is a more raw experience than the Boxster, but for sheer driving enjoyment and comfort, nothing can beat this thing. 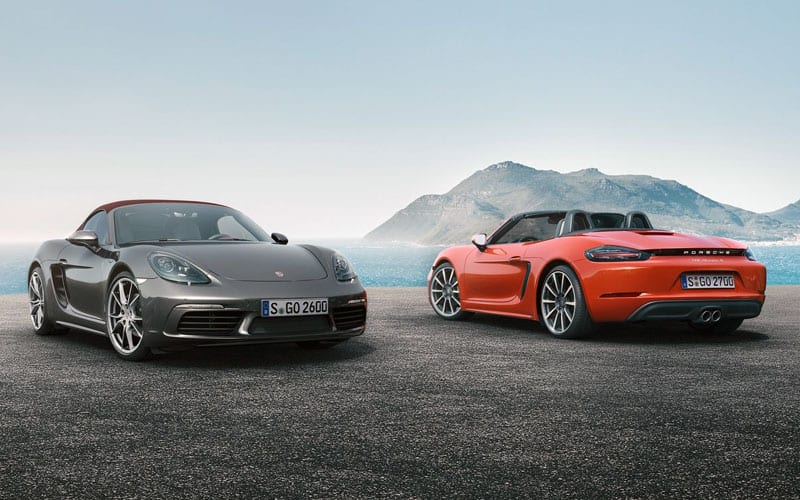 Prices for the base Boxster with the 2-liter unit start at $56,000, while the S model is priced at $68,400. They can easily rocket to figures as high as your pockets are willing to go. Just don’t get too carried away by the options, most of them you won’t ever need.