Home
Family Cars
Nissan
SUV
2017 Nissan Armada – Love It or Hate It, It Is Here

The original Nissan Armada, the first generation codenamed WA60 was a great car, especially when it first launched. Suddenly there existed a great SUV competitor from Nissan. A car which could quite easily carry your family during work days, perform all daily tasks but turned into a full-blown off-roader during the weekends.

Truth to be told, after few years it started to feel dated, both in terms of looks and technology. Nissan, however, didn’t think so, and they kept it in production the way it was for 12 years straight. Then finally, after they revised the Titan for 2015/2016, it was the turn for the Armada to get more attention, especially because it was based on the Titan platform.

As presumed the new generation was announced for 2017 at the Chicago motor show, however, it didn’t have the platform we all expected. It is now sitting on the Patrol’s platform rather than the Titan’s, this is a big change.

What can we expect from this new Armada?

Well for starters as mentioned it’s sitting on the Nissan Patrol and Infiniti QX80 platform but thankfully looks different from those two. This is not only good because the Armada needs to differentiate from these two vehicles in terms of design and capabilities, but also because in our books it’s much better looking than either of them. Looks are of course subjective, but the car has an overall impressive and opposing posture. It’s certainly large, but it’s not disguising the fact that it is, in fact, it’s proud of it. It’s a full-sized SUV and the styling is spot on for what it is. Styling cues have been taken from Infiniti and that’s a good thing you’ll agree. We can see few similarities but that’s all, we certainly salute this decision.

It’s not just the styling that’s different, however, so are the car’s dimensions. Because it’s based on the Patrol rather than the Titan, the wheelbase has been shortened by 2.1 inches but interestingly enough the length has actually grown by 1.2 inches, mostly in the rear but front overhang as well. It is 0.6 inches wider and 2.2 inches lower. The entire chassis is different as well. Frame rail width is now 3.9 inches increased from 2.4 and there’s now control-arm suspension featured on each individual wheel. The Armada is also 20 percent stiffer compared to the old one.

Perhaps the biggest news in a car like the Armada is the introduction of a new engine. There is an all-new 5.6 liter V8 developing 390 horsepower and 401 lb-ft of torque, a great improvement over the current 5.6 liter’s 317 hp. In a full-sized SUV such as this one, every horsepower counts and an increase as big as this will surely make a world of difference in the way the car drives and pulls. Even when fully loaded, it will feel much better than before thankfully to higher power and torque output. 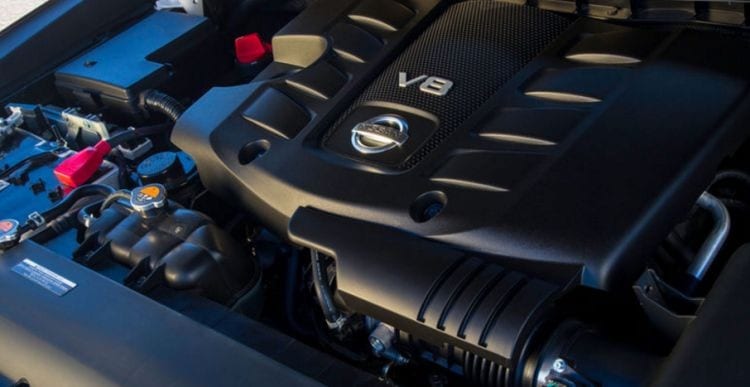 The engine is mated to a new 7-speed gearbox which replaces the old and dated 5-speed one. This increases drivability but efficiency and lowers fuel consumption as well. This is still a 6000-pound vehicle in its heaviest form, however, so don’t expect a Prius-beating MPG. It can tow up to 8500 pounds and has an optional four-wheel drive system which can send up to 50 percent of the power to the front wheels depending on the road conditions.

Since the displacement of the new unit is the same as the old engine, the power difference obviously came from a new tune and a range of new technologies. There are direct injection and improved variable valve timing, and Nissan claims the new Armada has the best acceleration in its class. That’s a pretty bold statement and one that will definitely have to be put to the test.

This is still an off-road capable vehicle, dirt track and trail capabilities are just as important as on-road ones. That’s why it has a 3.35:1 low range crawl ratio and big off-road capable tires that can tackle any terrain with much confidence. It is a big car with powerful engine and maybe it might not post impressive acceleration and top speed results but it certainly is not a slouch. 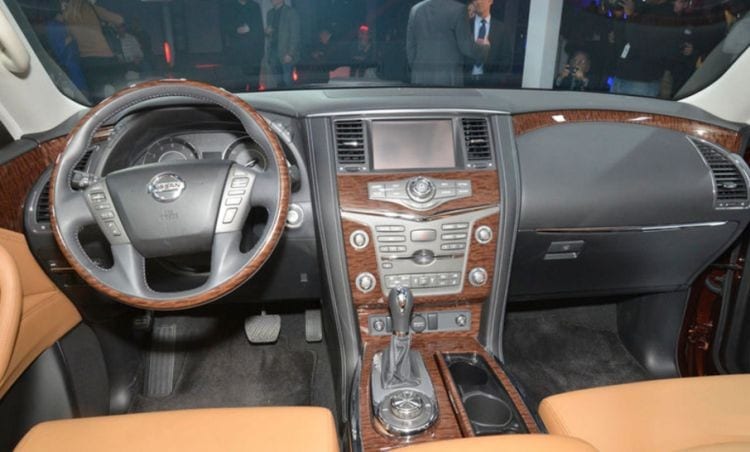 The interior has received a much-welcomed upgrade too. It’s still practical and spacious but now there’s just more of everything. It resembles less like an off-road vehicle of old with rough materials and more like a Nissan hatchback in terms of materials. Everything is considerably nicer and softer to the touch and the seats are super comfortable even for long journeys, not to mention bumpy off-road adventures. Plus, because there’s so much space, you can fit 8 people in it, just like you could in the old one as standard. Third row of seats might not be ideal for taller passengers so it is ideal for kids.

The technology and infotainment systems are upgraded too. The 2017 Nissan Armada comes in three different trims. The first one is the SV which features cloth upholstered seats, satellite navigation, Bose audio system with 13 speakers, a push-button ignition, heated front seats, a rear-view camera and medium-sized 18-inch wheels.

The second trim level is the SL which brings leather seats, a remote start option, fog lights, electric tailgate, 60/40 rear bench seats and big 20-inch painted wheels. The rage-topping Platinum model comes with a wide variety of technology features that are optional on the SL. Systems like adaptive cruise control, emergency auto-braking, blind-spot warning and backup collision assist are standard as mentioned on the Platinum model, aiding the driver in every situation.

The Platinum model can also be specified with captain’s chairs for the second row of seats, reducing the available seats from 8 to 7 but adding lots more comfort and executive feel to the Armada. You also get a center console for second row should you opt for this feature but it is removable for the passenger’s convenience. 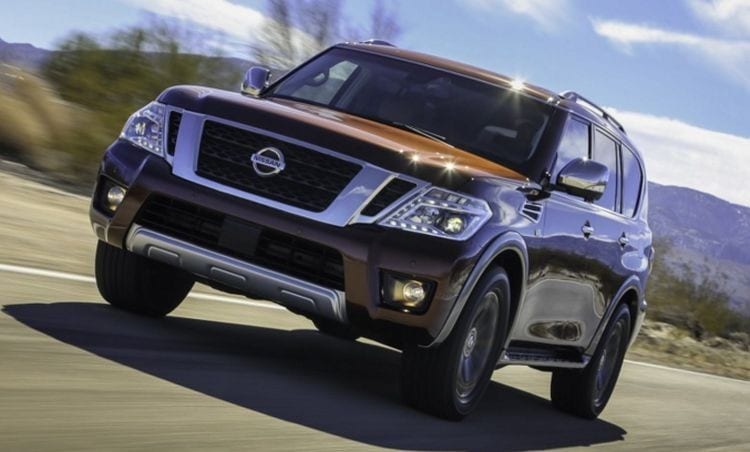 Whether you’re looking for a capable off-roader that can seat eight people or you just love the new Armada and must have it, you’ll be pleased to know that the 2017 Nissan Armada launches this summer when prices will be officially announced. If we take a look at the previous generation we can predict that starting price will be at about $40,000 while the higher trim versions will easily go over $50,000 or even $55,000. Expect them to be competitively priced knowing Nissan and what a great vehicle this model will be.

So there you have it, a much needed new Armada after 12 years. Love it or hate it, it is here. This new one has some pretty big shoes to fill, but if the old one is anything to go by then there should be no issues at all.