Is there anything we can say about the Mazda Miata MX-5 that hasn’t already been said? Everyone seems to like it, men, women, kids, you name it. It does the job of combining cutesy looks with aggressive stance and appearance perfectly. It’s purposeful, but not overly track or race-oriented. It’s just about right, and it’s a convertible which is perfect. With iconic status, upgrades and all the right features offered it has a great chance to further improve its position and become one of the dominant models in the segment.

But, for 2017 they’ve ditched the old hardtop and introduced a retractable roof, so it’s now a fastback, a retractable fastback at that. Whether you like the choice or not you can’t deny it looks that much cooler now, as if the Miata lacked any appearance elements. But it’s here, so let’s delve deeper into the changes and what makes it a better choice than last year’s new model. 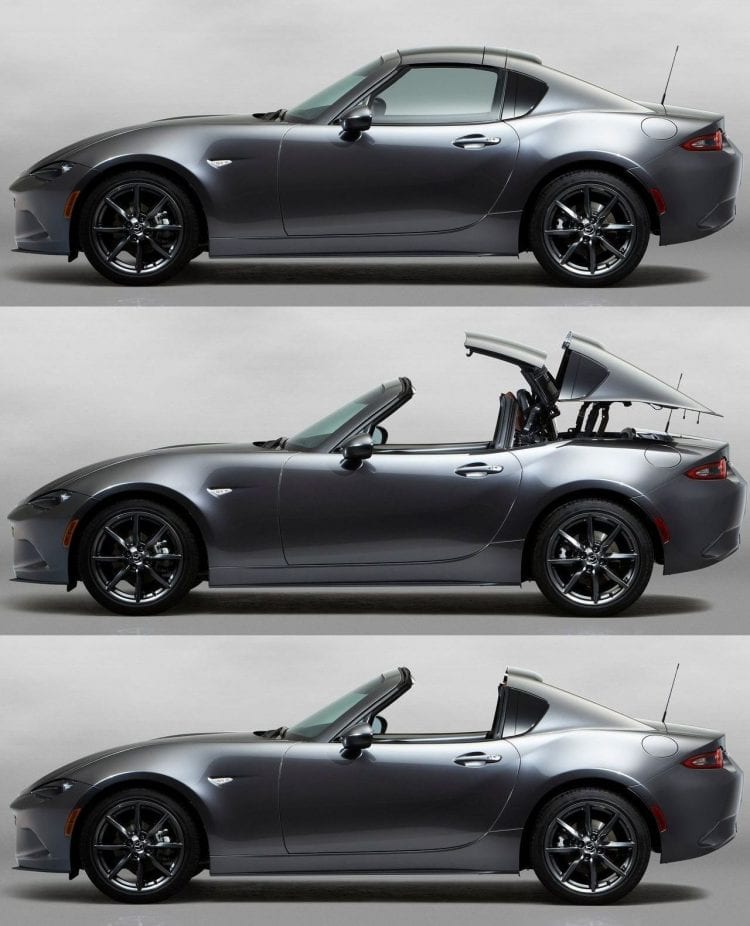 The only major update is the new power-folding roof which is similar to that of the Porsche 911 Targa, both in terms of look and operation. Okay so it’s not as complex obviously but the principle behind the concept and the mechanism is basically the same. The entire process takes just 12 seconds and can be completed at up to speeds of 6 miles per hour or to put it in other ways, walking pace. That might not be ok with some drivers, however, it means you can lower your roof while in very slow-moving traffic jams or exiting your driveway, making it more than ideal.

There’s two panels which work together, i.e. they fold while the window that’s behind them lowers behind the seats and is neatly stored away, awaiting your decision to put the roof back up so it can pop in place. The panels are stored in a small cubby hole that’s roughly 4.6 cubic feet, the same as the hard top Miata, proving this new roof design isn’t a hindrance to the little MX-5 at all. Now, we’re perfectly familiar with the phrase: “Don’t change something if it works”. That’s why we did a little investigation and found out the reason for this from North America Mazda President Masahiro Moro himself. It turns out the newest Miata MX-5 isn’t as long as the NC third-generation Miata, meaning there’s no room for a fully retractable hardtop like the one we’ve been seeing on the previous generation.

Make no mistakes, however, this isn’t just a compromise but an improvement. As you can see the MX-5 is still a looker, perhaps even more so than if it had a conventional hardtop. Nothing has been sacrificed to create this version, and we’re including trunk space and cabin space here in this statement. Because it folds into the same cubbyhole everything is exactly the same apart from the even more exotic looks, but those are nicer in our opinion.

From the outside, the car still has the general MX-5 shape and recognizable roofline, with the exception that it’s missing the central roof piece. It’s unmistakably a classic fastback coupe design, and roofline, with smooth flowing lines throughout the car starting from the front wheel arches, running down all the way to the rear lights. The rear is even reminiscent of a Jaguar F-type with the raised back and wheel arches, but not to the extent that it feels like it’s trying to copy it. It’s really nice and well-incorporated design, modern yet so capable of reminding us of the original. 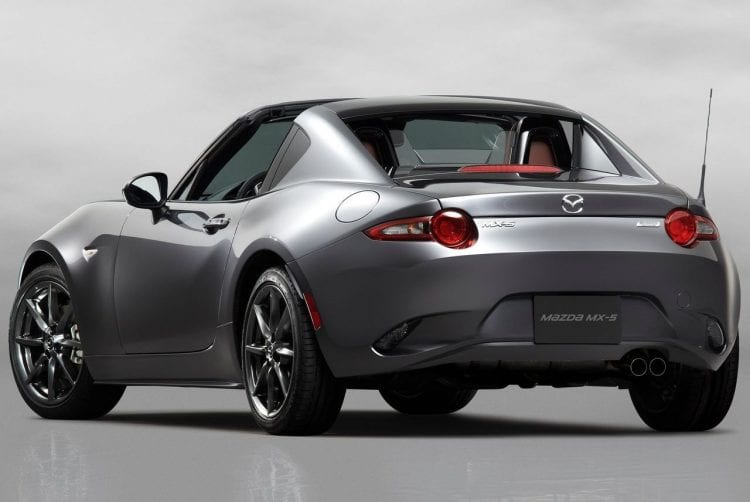 If there’s one complaint about the exterior it would have to be the gimmicky windows located at the rear-three-quarter panels, if you can even call them windows. They’re really just pieces of trim that have been completely blacked out to look like a piece of black window. Okay, we realize it’s a minor complaint and it doesn’t affect anything but we had to list some faults now didn’t we?

The interior is largely the same to previous year version, which is to say brilliant. Materials are on par with most competitors and in fact it even trumps most of them. That’s not to say it’s brilliant because it isn’t, there are some questionable plastics and the design is pretty bland and boring but hey what do you expect? You’re buying this car for the driving dynamics, open top experience and driver involvement first and foremost. And considering the price point, we really have no issues with the interior of the car, especially not with the great seats which offer lots of lateral support. 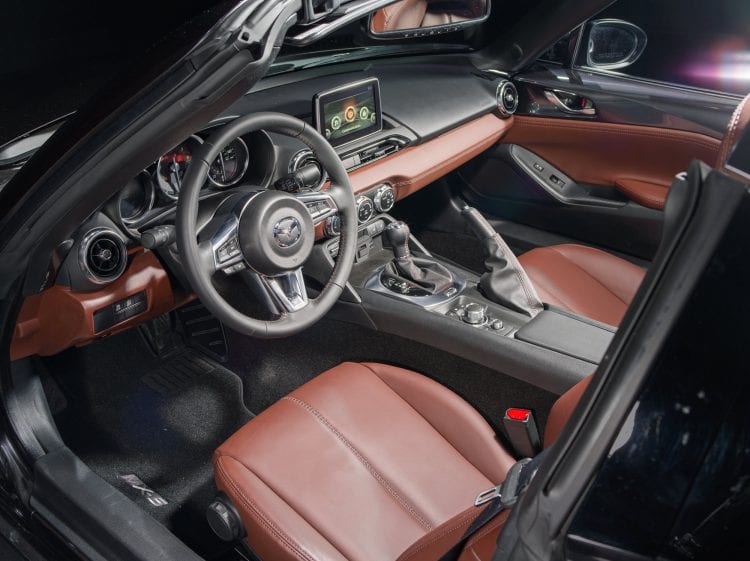 The only thing that’s a bit of a disappointment in the driving capabilities with the RF is probably the added weight. No details on exact weight yet but it should be around the same, which is to say about 140 pounds heavier at the worst case scenario which isn’t all that bad. That’s about one lighter passenger in your passenger seat. Hey, it’s a great excuse to take the car for a drive yourself isn’t it?

Engine options remain the same. There’s the excellent 1.5-liter four-cylinder found in European models but the U.S. gets the trusty 2.0 liter Skyactiv engine. The four-cylinder is mated to a six-speed manual gearbox as standard and there’s a six-speed automatic on offer too. We suspect however that more than ninety percent of buyers will opt for the manual since it’s the reason to get this car, driver involvement, and full car control. Besides, with such a small engine why would you want an auto? It’s not just a dull commuter, the MX-5 is a delight to the senses every time you get in it. 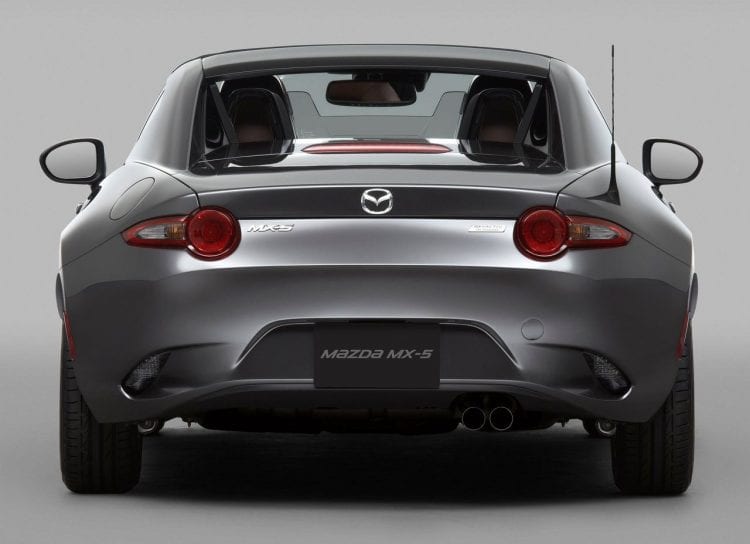 Expect the same levels of fun in the RF as in the soft top version. With 155 horsepower and 148 lb-ft of torque, it’s not a monster of an engine, but that’s not the point. There’s just enough body roll in the corners to keep it compliant and keep all wheels connected to the road, but not too much to throw you around the cabin. We could hear many customers wanting more power from this sporty and great looking car. It’s easy to agree and want more so we hope that Mazda will offer something else from its engine lineup. 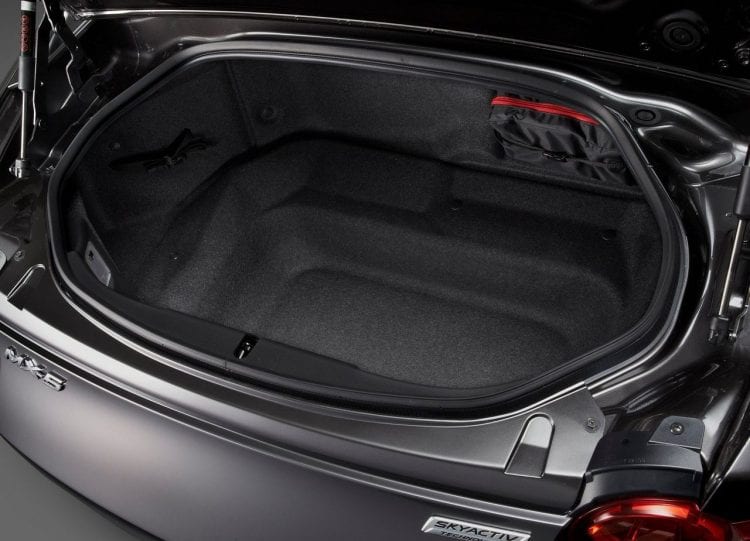 Overall, we’re really impressed with what Mazda’s been able to achieve. Making a decision for a change like that surely doesn’t happen overnight, but in the end, it’s a good one. Whether it’s worth the extra $2000 (not exact, just estimates) over the standard MX-5 you’ll have to decide for yourself. Starting price for the standard version is $24,915 and it will be interesting to see if the convertible will be $2,000 more.