Mazda was just stuck in a rut. There was nothing special about its models. They were appealing but never revolutionary, it’s not they weren’t comfy and quality made, but rather they were just average. And then one day world has turned upside down. Japanese car maker made a bold statement that instead of investing in hybrid technology, they are going to focus on current demands and invest in presence. Then they offered Sky Active technology, which made, till then, average technological bits into amazing figures while Kodo design language made cars much more than just appealing. So Mazda points their finger to the premium now, and while they are somewhere half-way, let see what its smallest bundle of joy in SUV segment has to say.

Kodo means soul in motion, and this little perky crossover has it. It looks good, as rest of the brand siblings, with imposing grille, elegant clear lines and general lack of fuss. It is small as SUV can get, but it still looks manly enough for guys, together with a mixture of cuteness for girls. How is it possible to combine both in the same car? I don’t know, but there you have it. 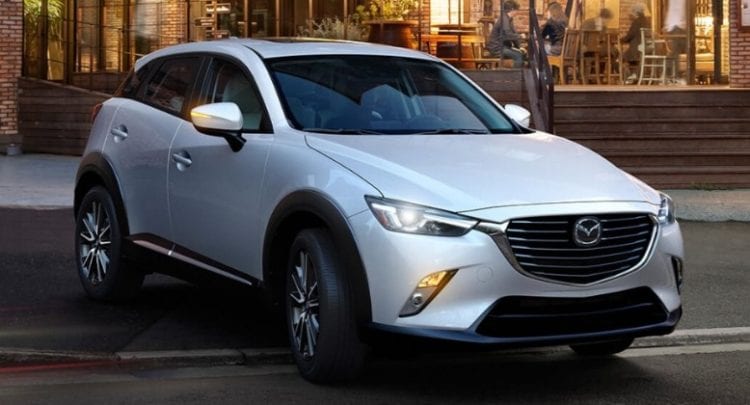 Well, that is what you expect from mini SUV in terms of cabin space. And it just isn’t. It isn’t either the living room, but space in the cabin is better than expected. 2017 Mazda CX-3 is based on Mazda 2 platform which is a city dweller, but there you have leg-room in the back as 35 inches, same as for BMW 3-Series, which is two segments upwards. Although the sloping roof is killing total joy but lets respect Kodo a little bit, as it takes little and gives much more. The boot will be capable too so don’t worry about that. Interior design is practically identical to model 2, it looks cute and nice, soft materials, good build quality and a decent sense of refinement are present, though not on the level of regular premium, but it’s getting there.

Don’t be fooled by its segment, because it can deliver more than expected. Sky Active has brought weight reduction with it, and it could be sensed as car weighs just 2,809 pounds and “praise it be” it brought more than decent fuel efficiency as 29 mpg city, 35 highway, 31 combined are offered. Here we have premium drive experience; lively, nimble chassis, responsive steering, and feeling of trust while cornering, pretty much everything that you can’t expect with segment rivals. Power is coming from 2.0-liter pumping 146 horsepower and 146 pound-feet of available torque, while it is eager to push all the way to the 6,500-rpm redline. Gearbox just supplements already good setup as 6-speed automatic with paddle shifters, do its work quickly and efficiently. Again, the 2017 Mazda CX-3 brings a surprise to the segment as AWD is available and it does a good job.

In terms of equipment, base Touring model is well coated. You get as standard Mazda Connect infotainment with a 7.0-inch touch screen and rearview camera, Bluetooth streaming audio and phone connectivity, air conditioning, cruise control, power windows and locks, tilt/telescoping steering wheel with wheel-mounted controls, keyless ignition and more. If you desire more go for some of the packages or higher Grand Touring trim with LED headlights with adaptive lighting, LED fog lights, LED taillights, a head-up display, leather seats with suede inserts, heated front seats, Bose audio with seven speakers and much more. Don’t worry about safety as NHTSA has been generous enough to give it five stars.

We haven’t found anything decent to complain about. It shoots for premium, it’s not quite there, but the price isn’t either as base model is $20,860. If you are boy concentrate on pride appearance in the small package, if you are a girl, point your eyes that are undoubtedly the cute factor, as, for rest, everyone will be pleased. It is just a total package.