The abbreviation NVH stands for the noise, vibration, and harshness. Judging by the comments of Mazda CX-5 critics and owners, it appears that NVH was one of the bigger problems on the vehicle and that it is in dire need of renovation. After the first-gen model that was too loud, Japanese company went on a mission to create the next-generation and to implement upgrades to the 2017 Mazda CX-5 that would be quieter and would have a more peaceful ambiance. The vehicle features strategically positioned aerodynamic parts that reduce wind noise, and additional work was done to eliminate low-frequency noises on not ideal road surfaces.

The new CX-5 will have the same level of noise as the 2016 CX-9, according to Dave Coleman, Mazda engineer. These two models share the same platform which is also used by all Mazda vehicles, other than CX-3 and 2.

The second problem buyers had with Mazda CX-5 was its stiffness. According to Coleman, even the old model was “head and shoulders above the segment for handling” and now the driving experience is enhanced by adopting firmer steering mounts after which the suspension was less rigid and handling did not get worse. In fact, handling just got better with an increase in body rigidity, Mazda’s G-Vectoring Control and the adoption of liquid-filled front suspension bushing.

The standard engine of CX-5 is the 2.5-liter Skyactiv-G four-cylinder with output figures that are still unknown. The engine that was standard on the Sport trim, the 2.0-liter, is distributed to other markets and the 2.2-liter Skyactiv-D diesel engine is coming to the U.S. Mazda really wanted to make it work in America without a urea injection system, but that could only be done by having an ultra-sluggish throttle response. This was one fo the biggest problems for Japanese carmaker to solve, so to avoid that the new CX-5 will have a DEF tank that will need to be checked from time to time in order not to break emission regulations. 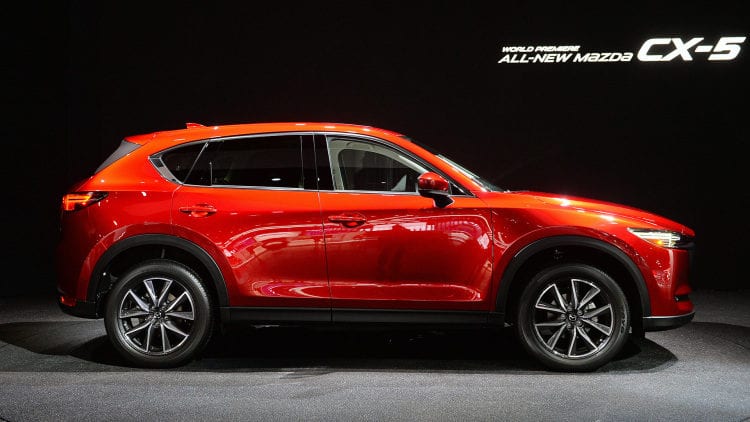 The new 2017 Mazda CX-5 will be a much-upgraded version of the compact crossover it replaces. The passenger and cargo area will be the same, as there were no complaints from customers. Following in CX-9 footsteps, the cabin is upgraded a bit with a more appealing design and materials of greater quality. The Grand Touring trim that was at the LA Auto Show was an example of that.

The pricing and engine specifications are still unknown, but we should expect to see those since the 2017 Mazda CX-5 is anticipated to hit the market in the second half of the next year. However, the vehicle with a diesel engine will have its debut a bit later, making way for a 2018 model.