The legend is finally back. Since the Continental model was downsized in the 1980s and 1990s, there have been rumors about Lincoln returning it on the market, but the company apparently waited for the best moment. The reason for downsizing Continental was a lack of interest which made it uninspired and anonymous, so the company had to discontinue the production. However, it is not always been that way: until the 1990s, this model was associated with world-class luxury standards in car manufacturing and was very well-received among customers. So, Lincoln finally decided to revive Continental and revealed its concept on last year’s auto show in New York. It caused a lot of amazement.

Continental was presented as a part of the latest Lincolns lineup, including Navigator, MK, MKC, and MKZ, but positioned as flagman model. According to a company’s statement, it is a flagship which will take Lincoln to the entirely new level of development. It certainly has a lot to offer, so let’s see how 2017 Lincoln Continental can impress us.

The design is not particularly expressive which is different from other models in the luxury sedan segment, including Infiniti, Lexus, and Mercedes. Unlike its rivals, Lincoln adopts a design that includes only a few elements that help to recognize the Continental: a large unique grille texture with a relatively large chrome letters that spell “Lincoln” on the trunk. However, everything else in this car hints that it was made for luxury and the highest level of comfort.

For example, the handles are manufactured without moving parts, which may be surprising for some but actually is a smart design. There is a button hidden on the back side of the handle that controls the latch assistant which pops the door open and closes it with just one push. This brilliant engineering solution also provided another benefit for the cabin allowing it to have more space on the inside of the door. Instead of letting this space be free, the designers installed stereo speakers there to provide better sound experience in the cabin.

The list of unique, innovative features continues with the technology of Perfect Position Seat, which Lincoln calls “a comfort zone.” Indeed, anyone will feel comfortable in premium leather seats of Continental that are highly customizable and can be adjusted to 30 different positions, including independent thrust extenders. Most reviewers called it a “wow” feature, and we certainly agree: with that level of customization and comfort, the driving experience is unique and unmatchable.

In addition, the interior is added with the SYNC 4 infotainment system that has a lot to offer to the customers as well, including voice activation, phone calling, texting (Android Auto and ApplePlay compatible), music (19-speakers audio system), and many more functions. Passengers on the rear seats will have its entertainment center and are provided with climate and audio management systems. Lincoln also showed its adherence to the comfort of the passengers by providing the seats with heating, cooling, and even massage function. Nearly an entire roof of 2017 Lincoln Continental will be a panoramic sunroof allowing more light into the cabin and giving it the feel of the even larger interior than it really is.

The all-wheel drive vehicle version will be powered by an impressive engine (so far, everything in this one is like that): a 3.0-liter V6 unit capable of producing up to 400 horsepower. The base engine is a 3.7-liter naturally aspirated V6 and Lincoln also decided to offer 2.7-liter V6 turbocharged unit. They both feature a 6-speed automatic transmission which powers the front wheels but will be available as well in an all-wheel drive version. The platform of the new Continental is shared with the remodeled Ford Fusion, which is to be released this year. There are three drive modes available for the driver: normal (default, can be changed), comfort, and sport, which can satisfy the needs of different driving approaches.

Given that the vehicle represents a luxury segment, it is packed with lots of different safety features. Adaptive cruise control helps to keep the vehicle at a reasonable distance from others, even in stop-and-go traffic. A second-generation 360-degree camera provides the driver with a seamless representation of the surroundings in low-speed situations (another ‘wow’ feature). Pre-collision assist and Pedestrian Detection contributes to safer driving along with perpendicular and parallel parking assist. Lane Keep Assistant will warn the driver about leaving a lane especially when such behavior is unexpected.

Autonomous driving capabilities are not provided in Continental, such as gesture control and hands-off driving. Although considered as important by some reviewers of the luxury segment, they are kept out of the model for some reason. Nonetheless, it does not reduce the coolness and innovation brought by Continental and maintains that old-school philosophy of Lincoln that made it super popular several decades ago. 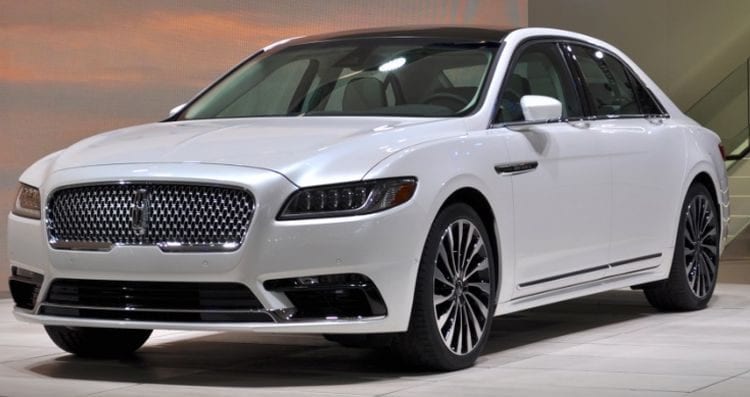 Lincoln provides Continental in four trim levels, Premiere, Select, Reserve, and Black Label. The first respective trim is the base one and includes HID headlights, e-latch system, 18-inch wheels, and a rearview camera. In addition to these features, Select trim level adds USB chargers, power outlet, 19-inch wheels and many other functions. The third trim, Reserve, adds a number of advanced features like blind spot assistant, tri-zone climate control, and cooled seats. Everything that can be produced for a luxury vehicle is added in the Black Label trim. In addition to all features described previously, Lincoln provides several exclusive services for Continental buyers, such as a list of Lincoln-friendly restaurants, complimentary dinners, and car washes. Nice touch there.

However, if the customers do not wish to upgrade to the next level trim because they need only a few features from it, Lincoln provides them with additional packages, technology, safety and climate-oriented options.

Naturally, the prices for ‘quite luxury’ of 2017 Lincoln Continental resemble its unique capabilities and comfort. Specifically, the basic trim Premiere starts at $45,485 and the next Select trim costs as much as $49,365. The starting price for continental in Reserve trim will be $61,030, and the highest Black Label version will cost slightly more than $70,000 including destination.

Undoubtedly, Continental is important for Lincoln to have its reputation and prestige restored, not only on American but also the international market. Given that the company plans to expand its presence in the luxury segment of the Chinese market, it is certain that Lincoln means business and anticipates decent sales, which, by the way, start this fall.