Château is a French word, and shortest description would be the word castle. Castles were tremendously luxurious, for their time of course, and at the same time tough and impenetrable, at least they wished for, along with being symbols of domination over subdued masses. Toyota Land Cruiser in its V8 or Amazon form definitely brings some resemblance to the castles purely because of its enormous size and rugged shape. It also incites connotations about domination, in this case over nature, as thousands of them roam Africa and Middle East deserts.

Although Land Cruiser got some luxurious perks on the inside, Lexus had to step in and make this proper “château” checking the lavish box. Current, third generation, was introduced in 2007, and after three facelifts, 2017 Lexus LX 570 still own the roads of today, paved, dirt or sand ones it doesn’t matter. 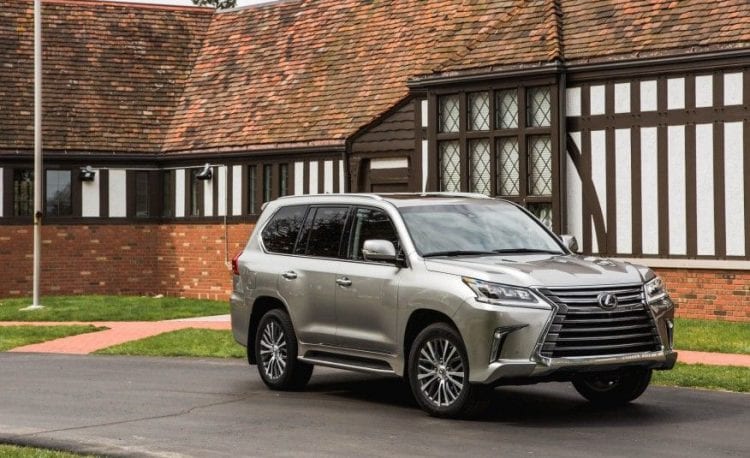 It looks simply berserk, as some angry alien perhaps. Its full LED eyes look both evil and satisfied at the same time, while grille appears as it is going to devour everything in front of it. Couple that with enormous size and there is hardly anything more menacing to be seen in the rearview mirror. It is quite interesting to see how something so rugged and boxy as Land Cruiser looks like when forced through some “bling” treatment. With this, you either love it or hate it, no middle ground.

It does not feature a cabin, it features a living room and lavish one for that matter. Dash and doors covered with stitched soft leather, wood accents, 12-inch infotainment screen, all screams abundance at the same time. The armrest is wide enough to accommodate a person and that should be plenty about impressions over available space.

No, just one more thing, it can seat 8 in all that glory. Though it’s not perfect. The third row better accommodates kids, and it can’t go flat, rather pushed on the side hurting available cargo space, which with its 45 cubic feet is far from impressive when its class is concerned. 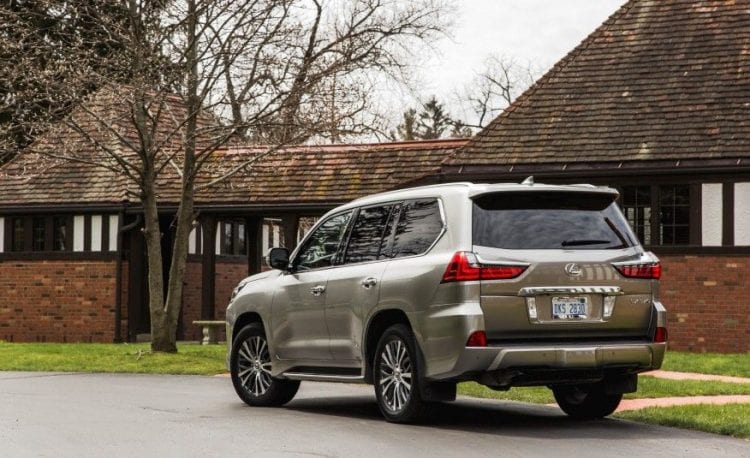 Lexus makes things simple here. As far as trimming go, you can choose luxury or slightly more luxury. There is only one trim which accommodates everything that you would ever need and much more that you wouldn’t. Let’s just mention adaptive cruise control, 360-degree surround-view camera system, four-zone automatic climate control, all kind of possible connectivity, 10-way power adjustable seats, among other things.

If 20-inch wheels are not your thing and you are dying for one inch more and if you plan to listen to Pavarotti at the highest volume, and only Mark Levinson sound system could satisfy you than go for that Luxury package.

Monster deserves monster under the hood and in this case that would be the 5.7-liter V8 powerplant in the engine bay that produces 383 hp and 403 pound-feet of torque joined with 8-speed automatic transmission. It takes 7.3 seconds to reach 60 mph, which is nothing special and it makes your smile grim when thinking about the gas pump with its 15 mpg combined of fuel efficiency. Rivals can do better than that for sure, but here, it’s not about that. The engine is so distressed that it will last for centuries and it never breaks, not even under Sahara’s heat.

Plus, there is nothing out there, that can come nearly close to it when you decide to take it off the road. Solid rear axle, proper 4WD, Crawl Control, Turning Assistance which even Land Cruiser is missing, all signifies that whatever nature throws in front of this vehicle it can plow through or over it without shading a single tear.

Just imagine the case you survived world destruction, and you have just one pick from the automotive world, then this must be it, no matter $90k price tag for that plot. Range Rover is luxurious, Chevy Suburban is sized as a house, Land Cruiser is unstoppable, and 2017 Lexus LX 570 is all of that. It is the only thing that does everything, and nothing can rival it in that sense.