Having seen the new 2017 Lamborghini Centenario on the Geneva Motor Show in March, all participants could say only one thing: “it blows our minds.” Indeed, this beast did just that: it is a solid, fast, efficient, luxurious, and graceful vehicle that deserves to get a badge as one of the most impressive super-cars right now. It’s just when we thought that the Italian auto manufacturer can’t go more extreme, it releases the car that is even more powerful and efficient and perfect in many regards.

According to the company’s statement, it has been released to mark the centenary of Ferruccio Lamborghini’s birth and celebrate the company’s success in producing one of the best supercars on the planet. “The Centenario is a car that perfectly combines tradition and innovation. It looks to the future while honoring the legend that is Ferruccio Lamborghini,” said Lamborghini President and CEO Stephan Winkelmann. “The Centenario is an opportunity for our designers and engineers to transcend some of the constraints of series car production to achieve an incomparable result.”

Well, if the company’s founder were alive today, he would be more than proud of what he created because the company has outdone itself once again. It stated that only 40 Centenario will be produced: 20 coupe and 20 roadster versions, and these cars have been already pre-ordered by customers from all around the world. That’s impressive: the car’s starting price is almost $2 million, but it did not stop the Lamborghini fans from obtaining this gorgeous piece of design and power, combined to excite and thrill.

Let’s try to put the feelings aside (that’s a tough thing to do) and subjectively analyze what it has to offer.

The heart of this beast is the most powerful engine ever manufactured by the company: a 6.5-liter unit capable of producing 770 horsepower. It is combined with an equally impressive drive-train: 7-speed double-clutch Haldex Generation IV transmission. Together, they will take the vehicle from 0 to 62 miles per hour in just 2.8 seconds (with the barking distance of 30 meters that is needed to stop from 100 km/h). The acceleration from 0 to 186 miles per hour can be performed in just 23.5 seconds. The top speed of the Centenario is just as impressive 217 miles per hour.

The steering of Centenario is sharp and comfortable due to three different Servotronic specifications coupled with the company’s own Dynamic Steering technology and Rear Wheel Steering technology. The vehicle’s driving experience is improved by using dual hydraulic circuit brake system with vacuum brake booster. You can be sure that the brakes on one of the most extreme vehicles will not fail you no matter how hard you push it. 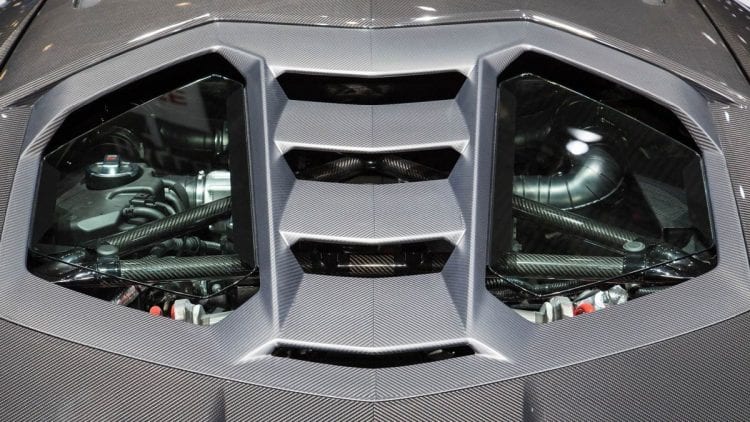 The car has been designed with aerodynamics in mind, and one of the most notable features is the extending rear wing to provide more down-force at high speeds. Vehicle measures 1.143 m high and 4.924 m long and is superior in its aerodynamic features. For example, the body is defined by intakes, vents, and channels that ensure the minimum drag and is made from a gloss carbon fiber and aluminum front and rear frames. The back of the vehicle is dominated by the integrated rear diffuser that is an important part of the flow distribution optimization and aesthetic emphasis of the aerodynamics. According to the official Lamborghini website, the dry weight of the Centenario is just 1,520 kg, which translates into the weight-to-power ratio of 1.97 kg/hp, certainly something that allows insane performances. 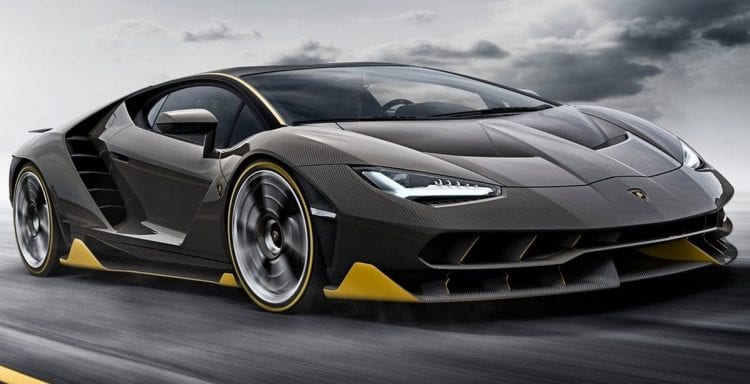 According to Lamborghini, the customers that pre-ordered the Centenario can provide their recommendations for the interior design elements. However, the default solutions are as follows: the seats are made using a high-quality, lightweight carbon fiber; sun visors, inner door panels, steering wheel, and many other elements are manufactured using this material as well. It gives it impressive looks but also reduces overall weight which is important for performance oriented vehicle like this.

The infotainment system features a 10.1-inch touchscreen display with sharp graphics and vivid colors. It connects the driver with the outside world through the satellite navigation, plus, it also allows using a number of great features, including social networks, phone calls, connection with the email accounts, and browsing the Internet. The entertainment will also be provided by the Apple Car-Play that connects your smart-phone and infotainment system so you can communicate, manage and play music and do other things available for i-Phone.

Another awesome feature that is pretty much available exclusively in the segment of supercars is the interior cameras. Although they are optional, most customers will pay for them because they allow you to record the experience as a driver, which is super fun when Centenario shows what it can do. 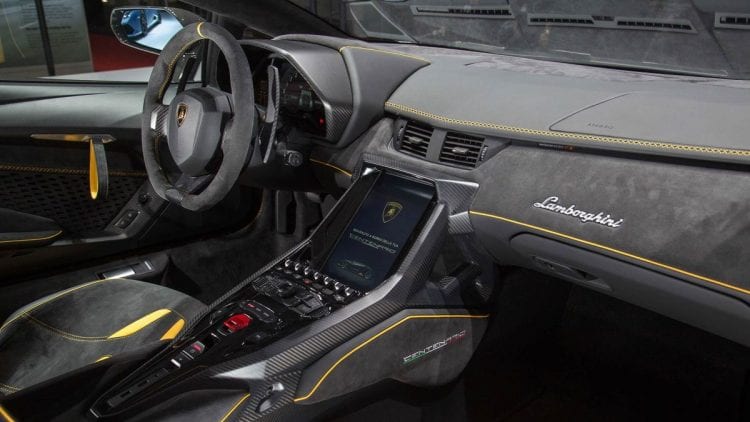 There are numerous features that provide a great level of safety for passengers and driver. For example, Centenario has front dual stage driver airbag and front adaptive passenger airbag. Moreover, the seats are provided with the “head-thorax” airbags as well. Also, the vehicle boasts cruise control, lane change warning system, rear-view cameras, parking assist, and many other convenient features.

According to the official Lamborghini website, Centenario will be available for sale in the fourth quarter of 2016. As it was mentioned above, all vehicles manufactured at the moment have been already pre-ordered at the starting price of $1.9 million / 1.75 million Euros (excluding tax). The company offers a decent level of customization for the customers, which will certainly make them happy with their purchase. 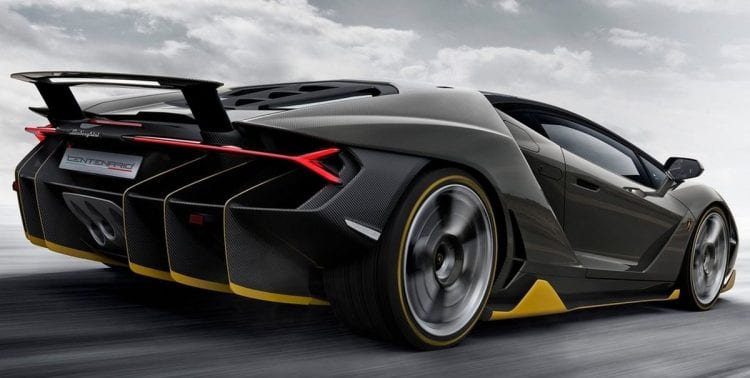 Well, Centenario is yet another Lamborghini’s model that continues the tradition of exclusive limited edition cars which allow the designers to experiment with various technologies and design possibilities. We think that the design was famously aggressive and spectacular, just like many other features and materials used during the production. Some super cool features like the interior camera will certainly make the owners want to hit record and take this car for a quick spin. As we expected, it will be super limited to just 40 vehicles, which may be disappointing to many speed enthusiasts and Lamborghini lovers because the brand is certainly admired by more than 40 people in the entire world; so as strange as it may sound for some, this one has been already sold out. However, it’s still great to have this one reviewed, because it can impress and inspire (and there is always a possibility that one of the owners will be nice enough to lend it for a test drive).