It might be hard to believe that Sportage compact SUV has been around since 1995 but it is actually the longest-running model among all Kia’s vehicles. Throughout the years, it has been modified in various ways and was offered in different shapes including basic SUV and even a convertible, and has gained the reputation of a reliable and functional vehicle. Today, it is one of the best crossovers on the market, which underwent a major redesign this year to continue its successful run. Let’s see once again what Kia has to offer in the latest remodeling of Sportage.

A full redesign of Sportage improves many characteristics of this legendary SUV, including interior, bringing new high-tech features, pushing safety and performances to a next level, and much more. The 2017 model is actually the fourth generation as an all-new vehicle and includes much more updates than the previous ones. 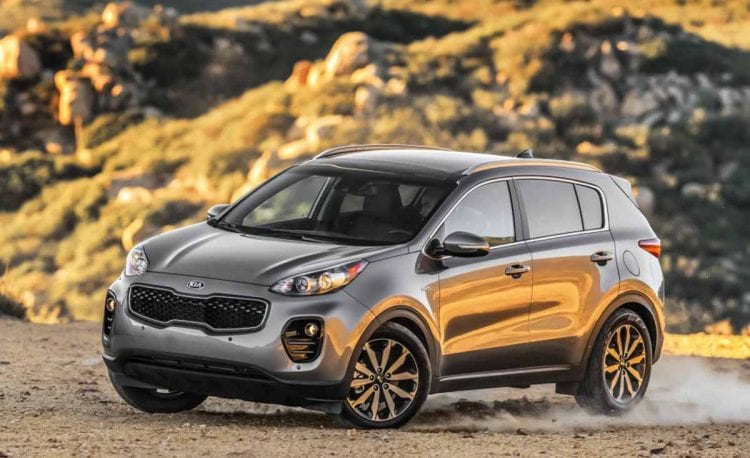 What’s under the hood?

There are three trims levels offered in the new Sportage, including LX, EX, and SX Turbo. According to the official data released by Kia, the first respective trim will be equipped with a 2.4-liter naturally aspirated I4 engine which is capable of producing 181 horsepower.

It is pretty efficient, as it can return 22 MPG in city and 29 mpg on the highway. The second available trim level is the EX, it has the same engine and again offers same fuel efficiency. 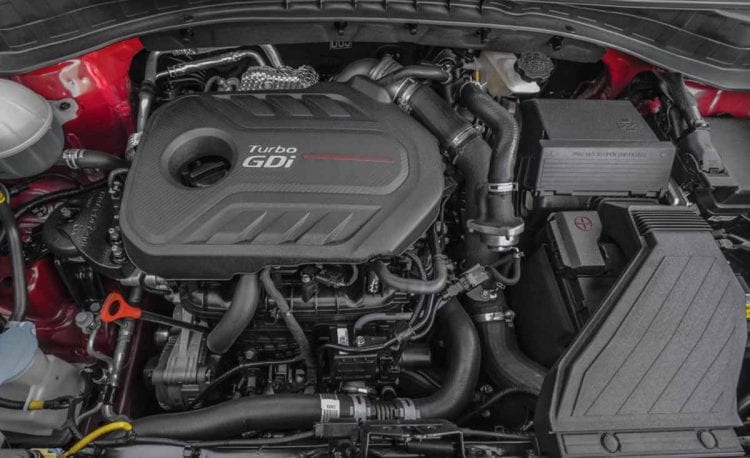 Both of these can be paired with all-wheel drive and in that case, fuel economy ratings drop to 21/25 mpg.

The engine used for the SX Turbo trim is a 2.0-liter turbocharged unit capable of producing as much as 240 horsepower making it the most powerful option in the lineup. It will cost you few mpg points but more power is quite rewarding. Kia rated it at 21/26 mpg city/highway while the AWD version brings 20/23 mpg. No matter which of these engines you choose you will be getting a 6-speed automatic transmission in all trim levels.

The new 2017 Kia Sportage actually shares the same platform with the Hyundai Tucson, which was redesigned last year. However, the Tucson looked much bigger with new platform than its size would suggest but this has not been the case with Sportage.

Despite it got 1.6-inch expansion in length, many reviewers suggested the vehicle did not look bigger but rather stubby from many angles but this impression is totally subjective. With the length and wheelbase expansion by 1.2 inches, the new Sportage looks massive and means business.

There are 17-inch alloy wheels available for each trim, which makes the vehicle look more aggressive. However, the SX Turbo level also has 19-inch for the customers, something you might not expect from a vehicle in this class. 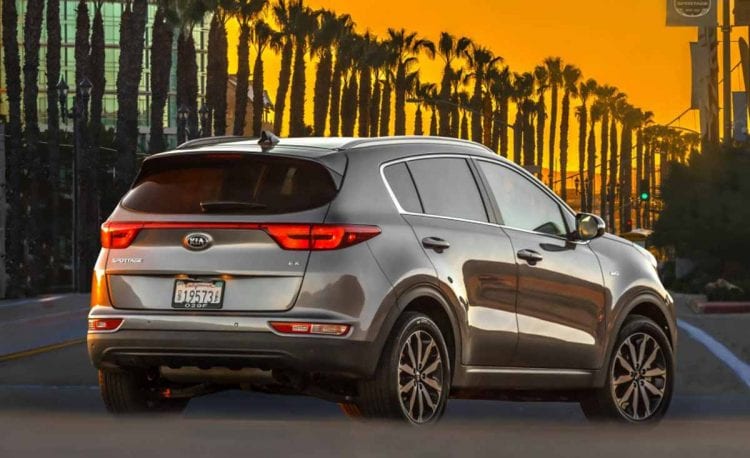 The daytime LED running lights and automatic headlights also look impressive and add a style to the exterior. The list of exterior features continues with the LED taillights, bi-xenon headlights, privacy glass, solar control glass (great amount of light comes to the interior but without added heat), sound-absorbing front windshield glass and a rear spoiler.

The increased dimensions have provided more interior space for cargo and passengers. Specifically, the volume has increased by 18 percent and now brings more than 30 cubic feet. This also provides more headroom, especially in the rear section, which contributes to the overall comfort of the vehicle. 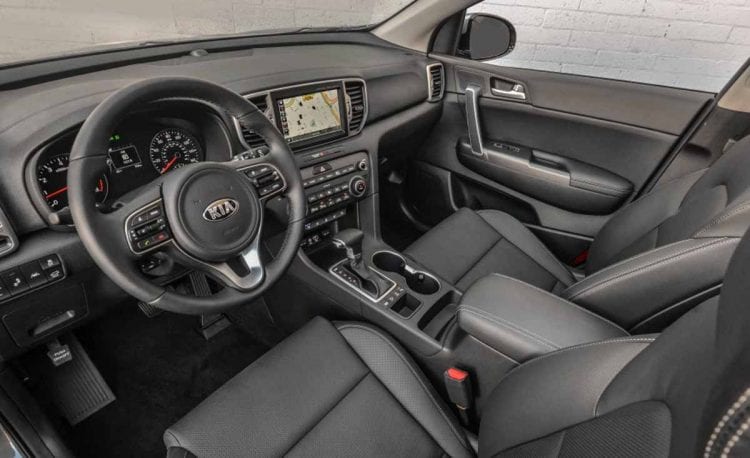 Inside the cabin, Sportage features more additional premium materials and new switchgear, which can be recognized by Kia enthusiasts. The finish, materials, and seats are all on par with other vehicles in the same category, which is a welcome feature and obvious improvement over predecessors.

The interior of the new Sportage also features Sirius XM Audio System with 5-inch touch-screen display and 6 built-in speakers. According to Kia’s website, this feature will make drives more rewarding because it includes more than sixty commercial-free music and entertainment channels. In the DX Turbo trim, the customers will find a different sound system, Harman/Kardon, which also includes an external amplifier and subwoofer, premium feature usually found on high-class cars. 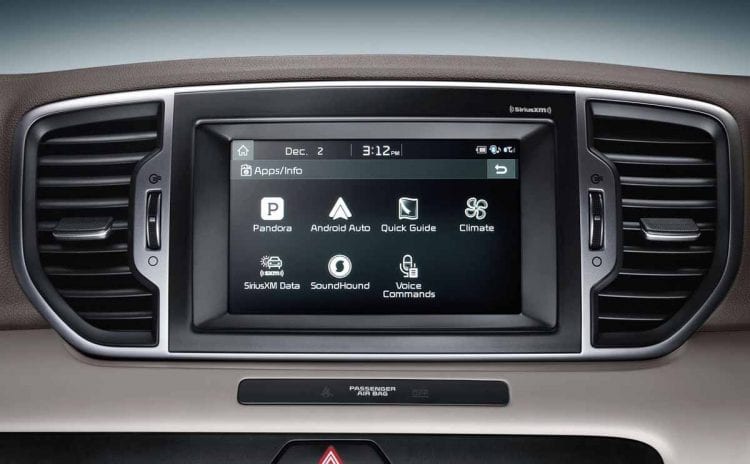 The touch screen on the highest trim level is upgraded to 8-inch size and a lot of safety features which will be described further. Therefore, this model offers different infotainment systems that can satisfy the needs of different customers.

Finally, the updates list in the new 2017 Kia Sportage continues with hands-free phone controls, USB jacks, air conditioning, and 12-Volt power outlets. Android and iOS owners will also be satisfied with the new Sportage because it features the latest Android Auto and AppleCar Play systems for integration of smartphones.

All three trims carry a significant load of safety features. First and foremost, they feature an advanced system of dual front airbags that detects the presence of passengers, monitors the severity of impact, and provides correspondent airbag inflation to decrease the risk of injuries.

An additional level of safety is provided by the dual front seat-mounted side airbags that are used in case of impact from the side. The manufacturer has also included an important feature called rollover sensor that detects the risk of rollover of the vehicle and automatically deploys the airbags and seatbelt pre-tensioners to ensure the maximum level of safety in the situation. 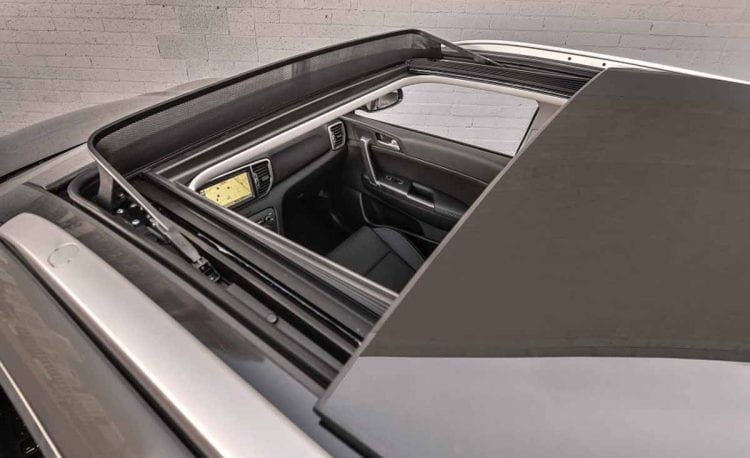 A serious level of commitment to safety is demonstrated by Kia in this model. Unlike in previous years’ Sportage, this one includes all critical and advanced functions on all trim levels, including a backup camera, autonomous braking systems, blind spot warning, rear cross-traffic alert, hill-start assist control, side-impact door beams, downhill brake control, and traction control system. At his point, it is sufficient to claim that Sportage is as safe as other crossover competitors. 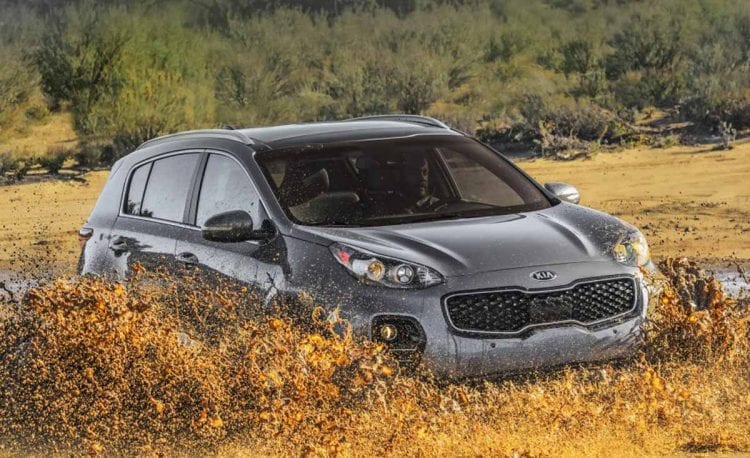 For the all-wheel-drive version for SX Turbo, the customers will have to pay additional $1,500 and the most advanced package for EX will cost an approximate $4,700, which is quite similar to what you will pay for other crossovers on the market.

For example, the latest Subaru Forester with a similar payload of features and standard AWD cost around $27,940. 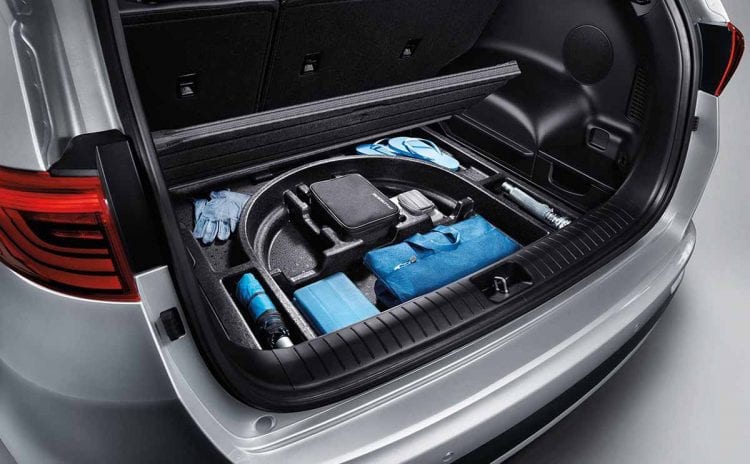 Should we get it?

Well, given the history of reliability, safety, and comfort of Sportage throughout the years, the model definitely deserves attention and consideration. Kia did a great job of redesigning this one so Sportage will be more than competitive on the modern crossover market.

Undoubtedly, it has got everything a customer could ask for so it might be a good idea to test drive one of these. After all, it is a powerful, efficient, safe, and innovative vehicle with a lot of awesome features that are created to serve and impress.

Find out more info on Wikipedia.org.