The Kia Soul has to be one of the best-looking city cars on the US market and despite this fact it doesn’t sell all that good, same is in Europe. Its exterior looks fresh and funky after three years since it was launched and it still manages to impress with a very comfy interior. However, because some of its competitors are getting a lot of new technology and safety features, Kia is forced to make few changes.

According to few sources, the new car has been rumored to launch as the 2017 Kia Soul. So far it seems that these stories might be true since the camouflaged version of the Soul has been spied testing not too long ago. It is obvious that the base shape will be similar, but heavy camo prevented us from getting more details.

The car we’ve seen camouflaged a couple of times now seems to sport some interesting changes over the current model. For starters, the front end seems completely changed, and it will most likely resemble that of the Sportage to some degree, especially since the car now looks to have round instead of its older and more aggressive headlights. The interior will likely keep the great materials untouched, but we may see a new infotainment system as well as probably a set of new safety features. 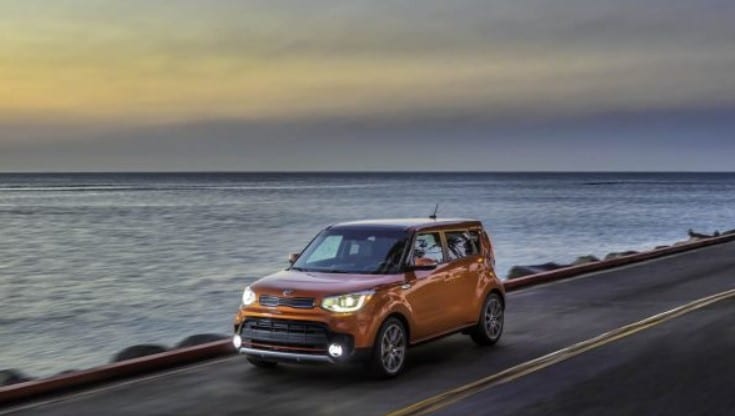 The high-performance model which everyone is talking about would be based on the Track’ster concept shown a while ago, and it would likely use the power-train from the European Cee’d. This would be a 1.6-liter turbocharged in-line four which would be able to provide more than 200 horsepower and over 200 lb-ft of torque, more than enough to allow the tiny Soul to compete with cars such as the Fiesta ST or even the Polo GTI in Europe.

A 6-speed manual is likely going to be the only choice for this particular model. The regular version of the car will probably carry on unchanged power-trains from the current model.

The base price is unlikely going to change but there are some rumors out there which suggest that the car might receive a new high-performance version that could cost close to $26,000, more than any other version of the car so far. If we take a look at the price list of a vehicle that is available today, we can see that the base version will cost you slightly under $16k, and similar will be with the next year model.

This mid-life face-lift of the car is certainly going to bring something more than just a few exterior tweaks. Probably the largest change over the current generation is going to be under the hood but more on this later. A few weeks back Kia said that the new model of the Soul might be released by the end of the year which would mean that the production car will be available starting with the first quarter of 2017.