The 2017 Kia Optima Hybrid and its Plug-in counterpart are coming to the retail stores around the world this summer, bringing high efficiency and elegant styling. Let’s see what this high-efficiency sedan has to offer.

We always like a good hybrid here. Not to take anything away from the Prius, but it lacks in certain areas where it really shouldn’t. The hybrid part is great but the rest of the car not so much. Sure it may have reliability under its belt but the exterior is dull and calling the interior bland would be generous. No, we’re talking about a proper hybrid, with all the amenities of something like an entry-level luxury car. 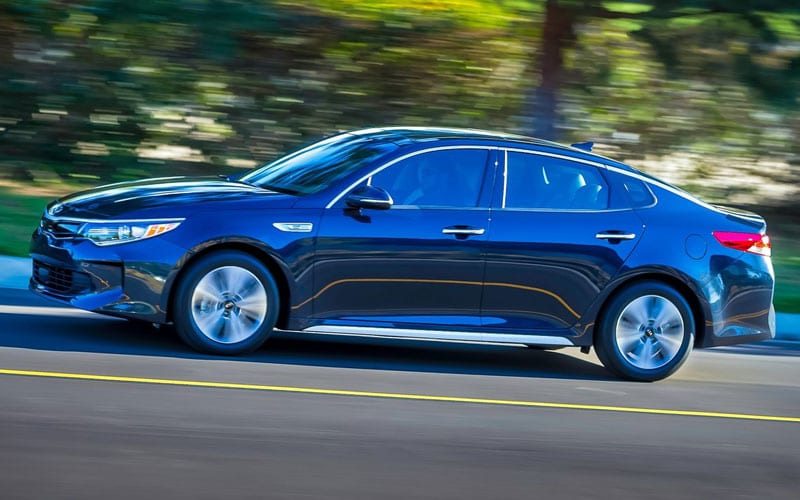 Luckily, there exists such a thing. The Optima has been Kia’s top-seller, bringing in a lot of profit and various customers that wouldn’t otherwise be interested in the brand. The sedan segment is perhaps the toughest one throughout the years. Sure the trend changes from hatchbacks to SUVs and crossovers year in and year out, but the sedan is always right up there. Between the likes of the Camry, Accord, Malibu and even the Fusion, there isn’t much in it. To stand out in this crowd you really have to produce and excellent product, which is exactly what Kia has done with the 2017 Kia Optima Hybrid. Despite fierce competition, they’ve managed to keep their big sedan in the golden middle, offering everything for a price that is much more affordable than the competition’s.

Not every sedan has a hybrid model in the mix, but having it brings another layer of versatility and that extra edge over the competition. With such reasoning, it’s hard to argue the introduction of the new Optima Hybrid. Ford, Honda and Toyota all have hybrids of their sedan version, so it only makes sense that Kia would join the party sooner or later. Note however that the hybrid is sold under the EcoDynamics brand. The brand being Kia’s electric and hybrid department, further differentiating the special models from the standard gasoline ones. 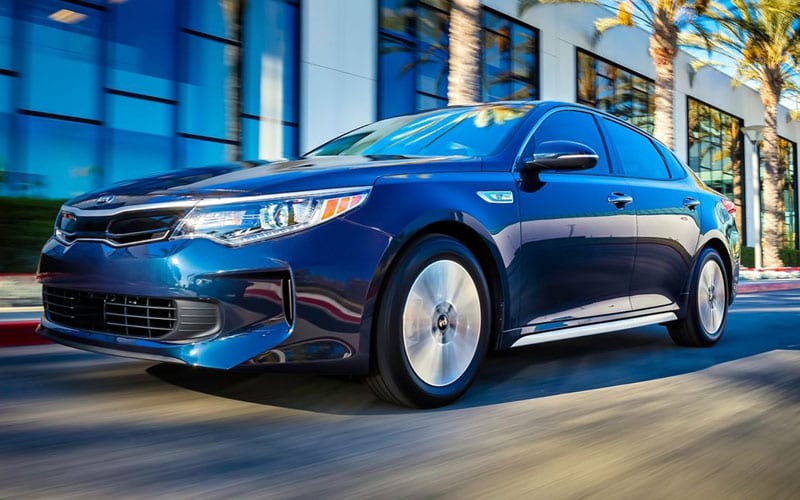 The exterior may very well be our favorite part of the 2017 Kia Optima Hybrid. Whereas cars in this segment can be a bit uninspiring and unoriginal, the Optima isn’t anything like that. Unlike the 2018 Ford Fusion we reviewed recently, you’ll agree the Optima is immediately much more striking. It has an appeal which most competitors simply can’t match. This coming from a brand which just ten years ago most people didn’t even know. It’s a mighty impressive feat, and one that sees Kia receive full praises from us.

The shape of the car is reminiscent of a sedan, but with a hint of a fastback. The swooping roofline elegantly slopes at the back with a shallow gradient, creating that arching back look which is really sporty. The front has the already recognizable “tiger grille” we’ve seen on other models. It’s got a piano-black cover just like the Kia Soul. It isn’t there just for looks either. It’s active, meaning it can open or close automatically to suck in more air, cooling the engine and improving aerodynamics, whichever one is needed.

The rest of the hybrid is very similar to the normal Optima, but those with a keen eye can spot the differences. The rear bumper has been redesigned and the air diffuser is slightly different. Of course the hybrid gets its own special wheels to match the powertrain, along with LED exterior lights and a satin finish. 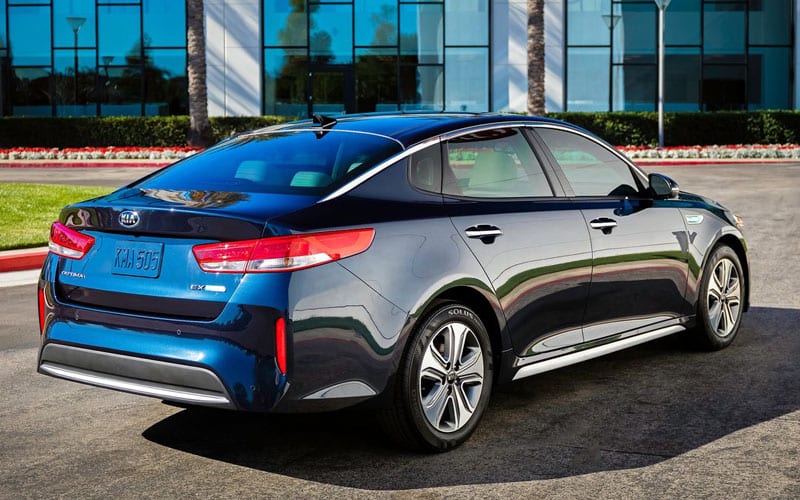 If you thought the exterior was great, wait until you step inside the 2017 Kia Optima Hybrid. It’s nothing but gorgeous leather and true aluminum accessories all-round. The materials are top-level, the only thing bringing it slightly down being the choice of leather for the seats which is slightly below expected but nothing to really complain about. The dashboard, door panels and everything you touch is soft and doesn’t feel gimmicky at all. The plastics (where present) are of high-quality and you’d never tell them apart from something used in a Toyota or a Ford for instance.

The instrument cluster on the hybrid is obviously different. It’s got battery monitoring, an extremely useful thing to have in such a vehicle. The seats are fitted on vibration-reducing frames for more comfort and are even cooled and heated (they’re optional). The Eco-DAS system gives you a “Coasting Guide”, a feature which can teach you how to drive the car in the most efficient manner. It will let you know how you should accelerate, brake and turn, all in the name of saving more electricity and fuel. There’s wireless phone charging and even a 360-degree monitor. The infotainment system is Kia’s very own UVO, here further implementing the electric battery into its supercomputer brain. It is compatible with Android Auto and Apple CarPlay for the tech geeks out there wondering. The navigation system can be specified too, as well as the sound system from Harman/Kardon. 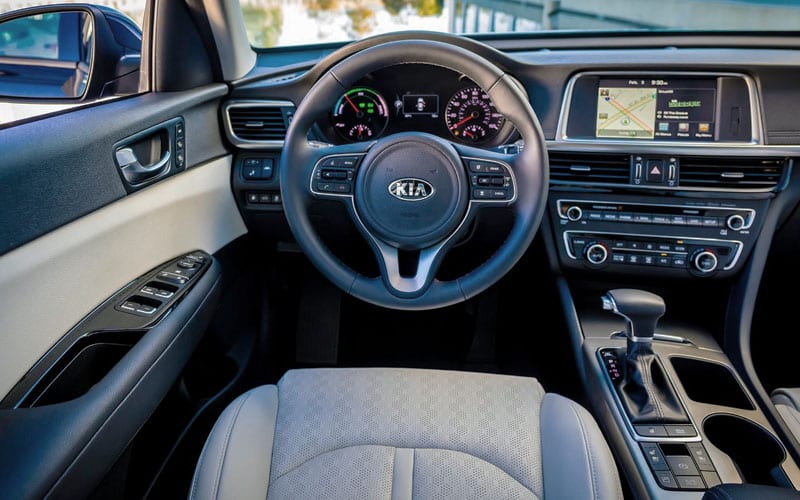 Times change, and we’re glad Kia decided to ditch the old 2.4L 4-cylinder engine in favor of the new 2.0L four-cylinder unit. It’s a good thing they did it sooner than later. It develops 154 horses on its own, but it is connected to the 38kW electric motor, giving out a total of 193 horsepower. It’s mated to a six-speed automatic gearbox and ditches the torque converter (finally). Take the 2017 Kia Optima Hybrid for a quick spin, and you immediately feel the extra torque that electric motor delivers, along with the crisper automatic transmission.

The electric motor is powered by a high-density 1.62 kWh lithium-ion battery hiding under the floor space of the trunk, and thankfully it doesn’t reduce any cargo space whatsoever. The fact that it’s mounted beneath the trunk means you can fold the rear seats in a 60/40 manner, something not all competitors are able to do. If you’re looking for a driver’s car, this probably isn’t it although the torque shove is really welcomed. Couple that to the new auto transmission which is miles better than the CVT and you have a car which is engaging to drive if nothing else. No, the isn’t that responsive but you can enjoy the drive. Prices are yet to be announced so stay tuned. Release date for the 2017 Kia Optima Hybrid is set for the end of this summer.