In 1944 WWII was beginning to show its first traces of end, so people could turn their attention to something else besides it. That resulted in an interesting idea by Jeep, which thought about the future and concluded that public streets could accommodate, until then, pure military Willis Jeep.

In 1945 Jeep CJ was born and rest is history. In 1986 CJ became well-known Wrangler, and with recent annual sales figures over 250k units, there is nothing standing in its path. Yes, there are lots of other capable SUVs, but not much hardcore as this. Land Rover Defender ceased to exist at the beginning of the last year, and until the new one arrives, together with new Ford Bronco, Wrangler is going to stay pretty much the only choice. This is related to its price class also as Merc’s G-Class is preposterously expensive, and Toyota’s Land Cruiser 70 Series is sold in just certain parts of the world.

Current Jeep Wrangler is in production from 2006, which means it reached over a decade on the market. It had its refreshes, honestly plenty of them, but things that stand out even better are available versions and special editions. To just name some of those: Rocky Mountain, Islander, Call of Duty, Moab, Sahara, Rubicon, 75 Anniversary and so on. New generation is set to debut this year, and in the meantime, an abundance of choices is here to make you interested. But what if, precisely 41, available version of Wrangler are not enough for you? Then Jeep could not help you, but somebody else can.

A number of the available options is bordering insanity, but it seems that some people want to go even deeper. That’s how we come to the Voltron Motors and to our 2017 Jeep Wrangler Stormtrooper. US market has always been keen to aftermarket fizzling with cars, and it is only matched to that in Japan. Wrangler is an icon and highly desirable thing, so why wouldn’t somebody take advantage of it and exploit America’s pursuit for uniqueness. 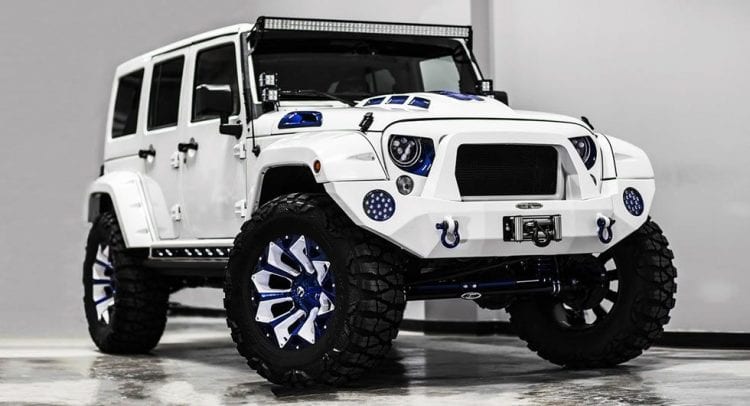 WHAT IS VOLTRON ANYWAY?

Voltron started as a small family company in the US, and since it was recently being hired to transform some Jeeps for the Fast and Furious franchise, its sales are probably going to explode upon film debuts. The company is totally focused solely on Wrangler model, offering 13(!) versions of it and choice of letting you design one. One of those versions is our 2017 Jeep Wrangler Stormtrooper Prestige Intimidator.

The thing that you see in the photos is called Prestige Intimidator, and nobody could argue that the name is well deserved. Thing looks berserk and it is easy to be intimidated by it. You have a pure black option, also red and white one, but blue and white just goes perfectly together in this case, as well with the huge hood bulge, side intakes, 4-inch additional clearance and LED lights. Enormous alloy wheels are most easily described as work of art as well as diamond stitched leather interior. It’s not just about amazing looks, as Fox Racing Shocks are in place of standard ones just in case that you are fan of pounding through desert moguls, you could opt for additional 60 horses, for musical delight there are Alpine speakers, one conveniently mounted on the tailgate, while infotainment system now features Apple CarPlay.

Wrangler starts from $24,000, while Rubicon Hard Rock version stops it at $42,000, before options clearly, although there are not so many of them. So how much would this beast cost? 2017 Jeep Wrangler Stormtrooper with its Prestige Intimidator package circle around $60k. Insane? Maybe not. Toyota FJ Cruiser looks like a baby next to it, it’s more menacing than Hummer H2 and Merc G-Class, while maybe only some trucks could stand next to it, possibly Ford Raptor or ceased Ram Runner, but none of it is going to be unique on the road as this thing will. Or maybe it will, Hennesey Velociraptor or Mercedes G63 AMG 6×6, first yours for $300k other for more than $600k, so one less zero in $60k comes as sort of a bargain now.