There are very few things as satisfying in the car world as seeing a concept car turn from just a concept into production. Back in 2012, we saw the Jeep Trailhawk concept for the Easter Jeep Safari. Even back then we immediately liked it and imagined what it would be like to have a production version of it. Well at the 2016 New York Auto Show Jeep answered our questions, although not with a brand new model, but rather a version of the Grand Cherokee titled the Trailhawk. If the name rings a bell to you, it’s because we’ve already seen it on the Jeep Renegade. Here however it promises to make the Grand Cherokee Trailhawk the most capable Cherokee yet.

Even Jeep’s head of branding division stated that the Trailhawk models are among the most popular in the lineup, and he expects nothing less from the Grand Cherokee version too. Especially since it has become Jeep’s most valuable possession winning the most awards for an SUV and managing to attract a huge number of buyers to this brand. 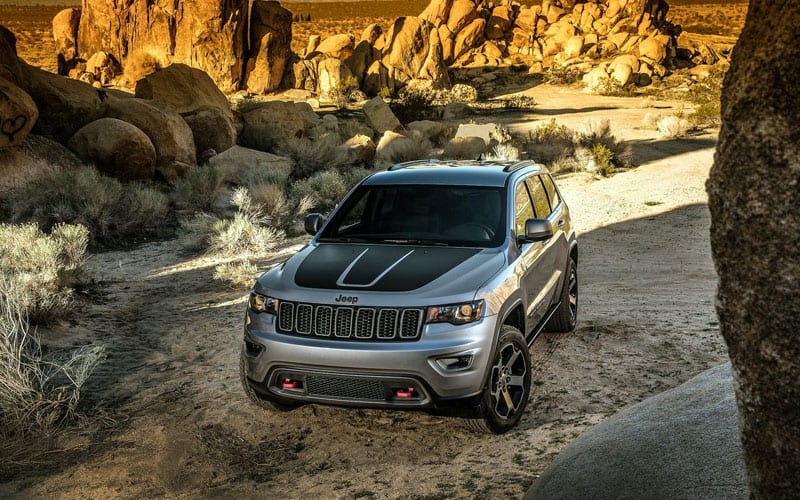 Let’s start with the exterior. First of all this model is available in multiple exterior colors some of which are but not limited to: Redline Red, Rhino, Billet Silver, Granite Crystal, Bright White, Velvet Red and Diamond Black Crystal. Overall it still looks like a Grand Cherokee, but you can instantly tell this one means serious business. The massive wheels almost make it comical in the way that they dominate the outside appearance, but it looks purposeful.

The approach angle of the 2017 Jeep Grand Cherokee Trailhawk is a decent 29.8 degrees, but that can be increased to a whopping 36.1 degrees just by removing the lower parts of the front fascia in case you need to take it on an extreme off-road excursion. There are 27.1 degrees of a break over angle and departure angle stands in at 22.8 degrees. Lots more has been achieved in the ground clearance department too which now measures at 10.8 inches. The front isn’t all that different to the Grand Cherokee 75th Anniversary Edition. 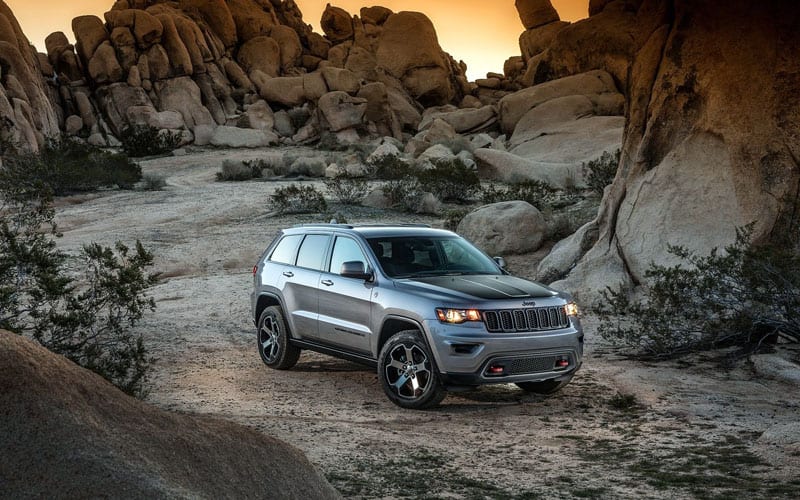 For added practically, although we suspect some flare as well, there are red tow hooks integrated into the front and rear. The front hooks are easily visible from the front because they’re protruding and aren’t exactly hidden, but not the same can be said for the rear ones who took some searching just to find them. There’s an anti-glare decal on the hood which is a nice touch too.

The whole theme here seems to be red accents, so on the sides, we find a red Grand Cherokee badge which contrasts the Natural Gray roof rails and mirror caps. Out back we find a virtually unchanged section with the same taillights although it’s worth mentioning the Trailhawk badges as well as the Trail Rated one have been accented with red too. 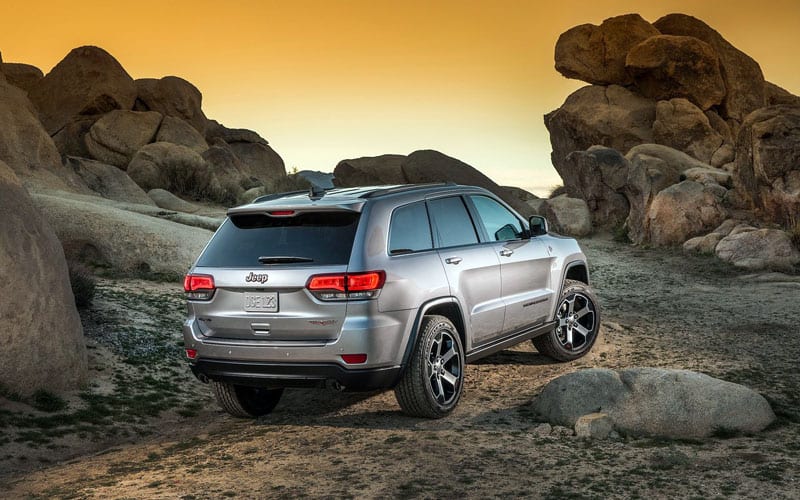 As standard, you’ll get the 2016 Grand Cherokee Trailhawk with off-road-ready tires wrapped around 18-inch wheels, but you can specify larger 20-inch wheels with bigger tires to match them of course but be prepared to pay heftily for this. Finally to cap off the exterior features we’ll mention that there are skid plates as standard. They’re a lifesaver, and we’re sure the day will come when you’ll be thankful to have them.

The interior isn’t as striking as the exterior. In fact, it’s rather dull and black. There are a few details on the 2017 Jeep Grand Cherokee Trailhawk breaking up the dullness but not much. On the leather seats, we find suede inserts and a red Trailhawk emblem into the backrest. Oh, they’re also stitched with accented red color to bring out the few features standing out. Even the steering wheel has an emblem just to remind you’re sitting in the most capable Grand Cherokee ever.

The materials aren’t particularly improved from the standard guises, but they aren’t that bad to start with. Okay so you may find a few cheaper feeling plastics here and there, but the overall feel is that of a luxury and expensive automobile. It may lack a bit in materials compared to competitors, but the fit and finish have reached a point where it can measure even with the best competitors. 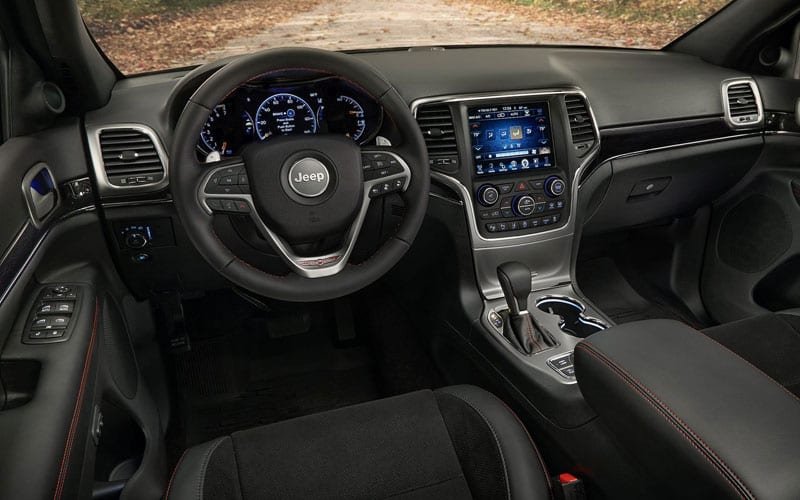 The seats are comfortable for every occasion. Whether you’re off-roading or just highway cruising they will keep you comfortable and supported. The front ones are naturally more spacious than the rear ones although there are ample head and legroom even for taller passengers in the back.

The infotainment system is on the positive side with its remarkable features. The standard display used here brings the 8.4 inches diagonal and features the Uconnect system. For the Trailhawk edition, it has been customized to provide useful information relevant mostly for off-roading although there are some fun and exciting options like wheel articulation, height and drivetrain options.

No particular details on the engine have been released yet, but we suspect it might have a choice of two gasoline and one diesel. The 3.6 liter V6 is almost certainly the standard engine, but the 5.7-liter Hemi V8 should be an available option too. Although not that popular especially in the United States, expect a 3.0 liter V6 EcoDiesel to make its debut in the Trailhawk too. One thing that’s for certain going to be fitted is the Quadra-Drive II 4×4 system which is Jeep’s invention. A rear limited-slip diff is standard, and the air suspension system from the Quadra-Lift has been specially tuned for the car alone. 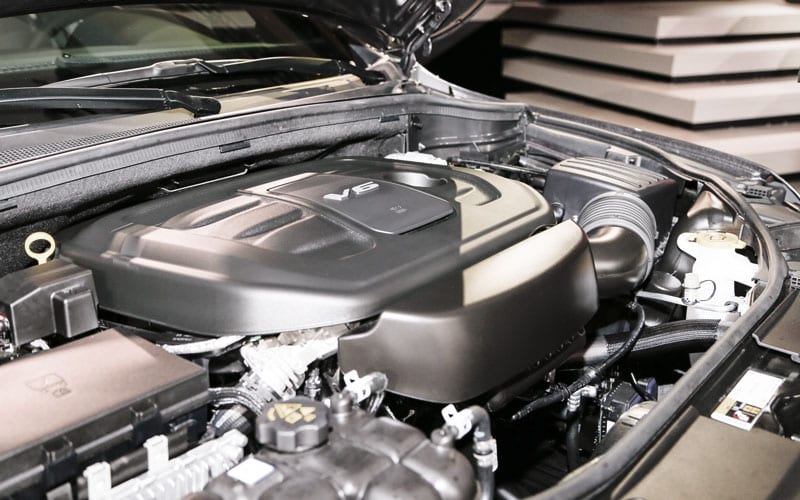 Apart from the usual array of mechanical bits you get Hill Ascent Control and Selec-Speed Control to assist you on your off-roading adventures. If all of this doesn’t speak volumes of the Trailhawk’s off-road capabilities, we don’t know what does.

The standard Grand Cherokee starts at $30,000 for the most basic model and that prices bump to $32,000 for the all-wheel drive one. The range-topping Summit model starts at a much more expensive $49,500 although that price rises still to $52,000 for the 4WD. The sportiest model is naturally the Grand Cherokee SRT Hellcat, which is fitted with a 6.4 liter Hemi V8. That version can be had for $65,400. Expect the Trailhawk to be somewhere in between the Summit and the lower standard models. The release date hasn’t been announced officially but we expect it to become available in the next few months and as the launch date approaches we will get more details about price and similar features that are still missing.