Home
Jeep
SUV
2017 Jeep Compass – While Waiting for New One

New Compass is coming. Unveiled in September in Brazil, but we are still waiting for its official debut on Los Angeles International Auto Show in November. What about the current version in the mean time. Is it worth of consideration?

Well, it’s been around for some time as it was Introduced in 2006, its life cycle reached a decade now, which is indisputably long period looking at today’s trends for any model.

It was redesigned significantly in 2011, with the desire to bring it closer to much bigger brother Grand Cherokee, but with questionable results in terms of liking at least when it comes to the exterior.

Changes to the interior brought softer materials and much more appealing design, but that is all compared to the original model. Set it side by side it to the modern rivals, and you’ll see it is far behind rivals such as VW Tiguan, Nissan Qashqai, Hyundai Tuscon and even Jeeps own Renegade too. 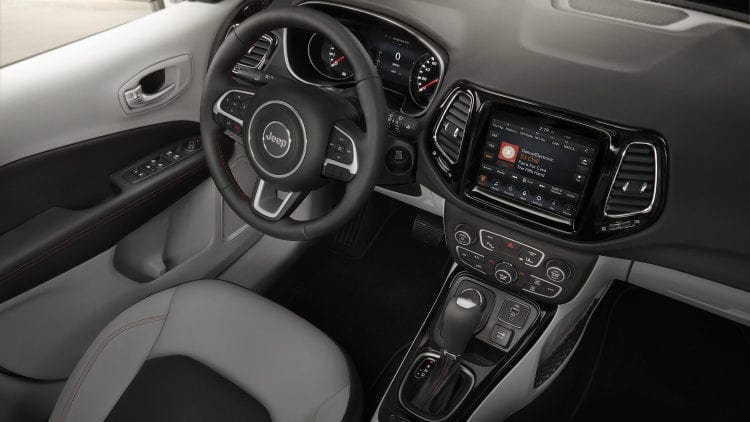 For 2017 Jeep Compas you have five trim levels- Sport, Sport SE, Latitude, High Altitude and 75 Anniversary, which is still present and strangely because 2016 was the year of the anniversary in question. In Sport trim you will find Bluetooth connectivity with audio streaming, Sport SE will bring heated front seats, steering wheel wrapped in leather, and bigger 18-inch alloy wheels.

For funky appearance options, you have to go to the 75th Anniversary model with which you will also get the sunroof. For everything said, having to pay extra for power windows and locks it’s just beyond strange for today. Further up the range, Latitude brings a trip computer, automatic climate control, and navigation system. And finally, highest trim High Altitude carry with itself leather seats and a bunch of extras for the appearance.

Comfort in Compass is again something unusual. The sitting position is deep down, not often seen at SUVs of this type. Front seats are decent, but rear bench is not as it resembles park bench and it has only one cupholder.

Under the hood, options are not wide, and both are noisy. The base engine is 2.0-liter petrol with 158 hp and fuel efficiency rating of 25 mpg, with an extra option of 2.4-liter petrol with 172 hp and 23 mpg. Gearbox is pretty much outdated as it comes with 5-speed, again something rare for today. The 6-speed automatic version is optional, which is probably something most of the buyers will choose.

CVT is another extra, and it comes with Freedom Drive II package, which does bring more off-road capability, but at costly expense of both fuel economy and on-road drivability. Like most CVT’s it is struggling with refinement and clinging to high revs, so we need to place in the bracket with something not to be recommended. It is there to simulate two-speed transfer case’s low range which would allow crawling ability, but anyway, the standard all-wheel drive will get you where you were intended to, so CVT should be avoided.

The safety record is probably weakest point for the 2017 Jeep Compass. Three-star frontal results from the federal government testing are something that is rather forgotten by Jeep and front active head restraints, electronic stability control, and Hill Start Assist as standard don’t change much here. His sibling Patriot hasn’t performed much better in terms of safety too. Although Compass was positioned by Jeep as upmarket compared to Patriot, significant differences were not detected by us.

And so, the verdict. Is it worth of consideration? Well no, but the new model is, and it is just around the corner so we urge you to wait and see what upgrades will be offered.