With British manufacturer revealing its new 2017 Jaguar F-Type SVR at the 2016 Geneva Motor Show, we thought it would be a good idea to look at the way this car was developed. So before we dig deeper into the specifics of this new model, let’s take a look at the current range and what makes the F-Type such a great starting platform. When it was first launched in 2013, many people called it the best looking car ever made. Sure there were those who didn’t agree, but as a whole the car got mostly positive feedback, and how could it not. With looks like that, however, came the question of whether it would drive as good as it looked.

Although it was heavily criticized for not having a manual at the beginning, the engine choices proved to be nothing short of spectacular. The 340 horsepower V6 base model was realistically enough for most people, many however opted for the much more powerful V6S, which develops 380 horsepower. The V6 proved to be a great engine, and some even consider it better sounding than the V8. It pops on up shifts and crackles on overrun.

Then, of course, we come to the flagship model. The V8 model is chosen mostly by people who had a death wish. The car is simply too powerful for its own good. Systems developed by Jaguar such as traction control and stability control are the only thing keeping you on the road when pushing really hard. If you aren’t a really good driver, it’s best to leave these systems on.

Later, a manual, all-wheel drive and coupe versions became available, but none is as mind-blowing as the new F-Type SVR. It’s here to do one thing only, and that is to claim the spot as the fastest Jaguar F-Type ever built. The original F-Type is often called a British muscle car, due to its nature, the roaring V8, and the way it just loves to do burnouts. Well, consider this new one an improvement. The muscle car to rule them all.

This insane creation produces 575 horsepower, 25 more than the already absurd F-Type R Coupe. Although that may not seem like much, in a car as light as this, it’s enough to propel it from 0 to 60 mph in just 3.5 seconds and it will continue accelerating to its top speed of somewhere above 200 miles per hour. If there ever was a car that needed to come with its own racing driver as stock, it’s certainly this one.

For those unfamiliar with the SVR name we should explain that this is the first Jaguar to ever wear the SVR badge, which is a performance badge fitted only to the fastest model in the line-up of Range Rovers and now Jaguars. They are high-performance models and represent the flagship model in each category.

The SVR Coupe (Special Vehicle Operations) will be able to manage 200 miles per hour, but the Convertible has a slightly lower top speed of 195 miles per hour. New upgrades all-around the vehicle enable it to achieve this monumental feat and levels of performance that only supercars had just a few years ago.

The most obvious visual differences are the new aerodynamic upgrades over the standard car. New front air inlets and an upgraded splitter give it a sharper look, as well as aiding the car’s high-speed stability. With more power, there’s also a new cooling system, so those inlets really come in handy for feeding in more air to the engine, especially under heavy load.

The diffuser is also heavily revised for higher efficiency, and there’s also an active rear wing. A fixed one might save weight, but would add drag, and drag is not something you want for doing 200 miles per hour. The floor of the car is also flat, giving it an even greater aerodynamic coefficient. Because it’s so streamlined, the active rear-wing can deploy when needed, when driving on a mountain road for instance, and it can quickly retract for those high-speed runs down the straights keeping everything under control.

Because there’s more power and a lot more speed involved, bigger wheels are fitted allowing wider tires. The bigger tires can contain all of that raw muscle the car has and makes the power actually usable. Behind the bigger wheels lie carbon ceramic brakes which reduce overall weight by 21 kilograms, something that you want on your top performance car. Considering this weight saving comes just from the brakes, it’s a fantastic way of extracting more performance, as well as doing so for longer because carbon ceramics don’t have a tendency to fade like regular brakes.
Finally, to top it all off, there’s a new performance titanium exhaust system, saving another 12 kilograms of weight, but probably adding 12 more decibels of noise. This, you’ll agree, is no bad thing and only accentuates the already intoxicating soundtrack the F-Type produces in any guise.

It wouldn’t be an F-Type without some special interior features. Inside, this car was already as beautiful as the outside but has now been freshened up with the addition of a newer steering wheel, sports seats with quilted leather and contrast stitching on the dashboard. Note, the seats are unique for the SVR and no other model has them. When we compare standard F-Type with SVR version interior we will notice many similarities. Top trim SVR comes with high-quality leather that has been used for specially designed seats which will hug you in corners and keep you in the right position no matter how hard you push this supercar. Leather trim is also pretty much everywhere in this car, center console armrest, doors and even parts of the dashboard, incredible. With few discrete SVR badges on seats, steering wheel and dashboard you will immediately know that this is one special edition.

The large and high-quality display on center console offers navigation and vehicle details and the smaller display behind the steering wheel gives you most important information about everything related to trip and performances. Multifunctional steering wheel with paddle shifters looks impressive while on the door we have various buttons for electric seat settings and mirror adjustments.

The F-Type was already a luxurious high-end performance car even before the introduction of the SVR. This new model seems to raise the bar for everyone, including Jaguar, keeping them at the top of their game. If you were thinking of getting a Porsche 911 or even a Mercedes AMG GT, think again and check out what Jag has to offer. 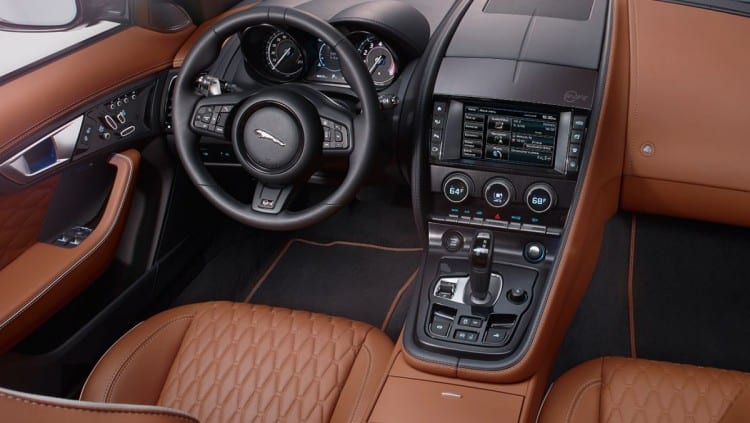 With killer looks and borderline supercar performance this sports car is sure to win you over. There’s something in the way it looks, that even if it weren’t for its fantastic dynamic capabilities, we can’t help but think that most people wouldn’t even care. It just looks great, and the fact that it drives as good as it looks is an added bonus. Prices start at $126.000, although only 558 will be built for the U.S.