Both Toyota nad Nissan had a similar idea – distinct them from common cars by offering premium experience through separate brands. Both Lexus and Infiniti had been formed in the same year, 1989, and both brought significant success to its parent companies. Lexus went berserk with top models as LFA was reaching in some versions almost half a million price tag, while Infiniti stopped at the natural barrier with full-size luxury SUV segment rarely crossing the $100k line. That top of the line for Infiniti currently would be 2017 Infiniti QX80. 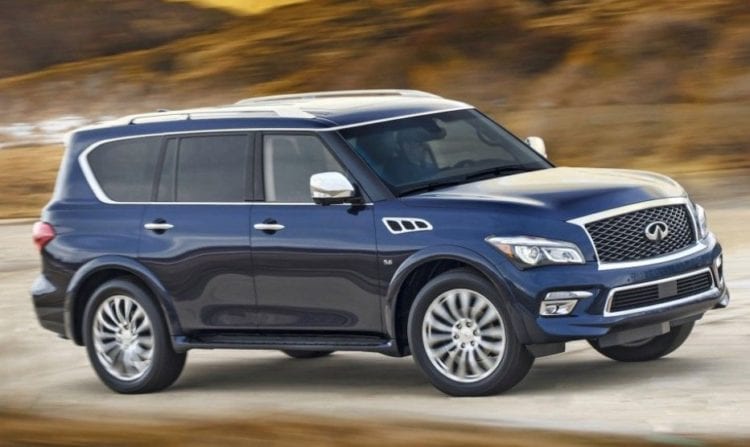 It was known as QX56 and in 2009 new generation brought, among other things, Infiniti’s new nomenclature. Refresh in 2014 introduced even more imposing looks to the car that already looked like moving fortress. Its eyes are even angrier now, and appearance of angry rhinoceros will definitely force everybody to get out of your way. Lot’s of chrome creates bling factor, and while tacky to someone, it resembles heavy jewelry hanging around rappers neck and boosting the image of the king of the hood.

QX80 is basically Nissan Patrol but with premium coating and cabin as its highlight. It is gorgeous. Everything is also preposterous in size, from the dash to the armrest, all parts are dipped into the great luxury, and eight people can enjoy it at the same time. Design wise it can still pair any rival and amount of leather, wood, chrome and fine stitching can create a sense of luxury abundance that can stand proudly with Range Rover’s.

Refinement can go along with one in Escalade, while Mercedes GLS is still out of reach, well, that counts for anybody in its class.

The engine is still the same, hence the old name, 5.6-liter V-8 delivering 400 horsepower and 413 pound-feet of torque, with drive going to either the rear wheels or all four via a 7-speed automatic transmission. You’ve seen bigger numbers don’t despair as this beast can hit 60 mph in less than 7 seconds and for most of us that is sufficient.

If you go for one of these SUVs fuel efficiency should be the last thing on your mind, but just to mention it is rated at 16 mpg combined and even 15 mpg with AWD, and if that scares you, move your interest to another segment. 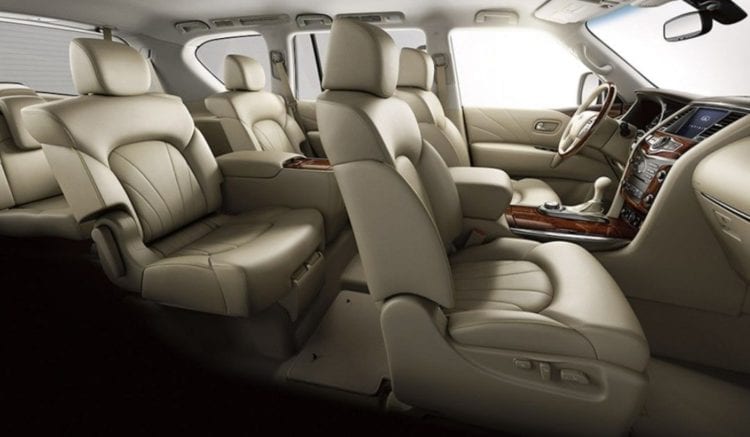 This thing is proper SUV with a ladder frame, and everything comes at the cost. So count on the towing power enough to take up to 8,500 pounds and real off-road capabilities, with low gear ratio, 50/50 split power between axles if needed and hill assist gizmos. On the other hand, also count on uncommunicative and excessive light steering and clumsy cornering behavior. Keep in mind that body movement can be stopped by checking the box for Hydraulic Body Motion Control system that uses hydraulic pressure at individual wheels to help damp out the body lean.

What you can count on in every QX80 is leather upholstery, a navigation system, DVD audio, satellite radio, Bluetooth with audio streaming, keyless ignition, USB connectivity, power tailgate, sunroof, 20-inch wheels and surround-view camera system with cross-traffic alerts. For everything else, there is Limited trim and lots of separate packages.

2017 Infiniti QX80 is a model that is already seven years on the market so far, and that is rude in some way. But, polarizing looks had a little alternative between rivals, if you dig them of course, and abundance of visual luxury in Range Rover‘s manner is offered with a much more affordable price.

And there you have it, this is why it is still here, and may we just add that sales are rising and Lexus’s LX is left behind by proper margin. So, if you don’t like it move out of his way.