Please don’t be shocked if you forgot about this gem from Infiniti. It has been introduced in 2007 as EX model at the time, and the new version is not in near sight. Yes, that is a decade long. If you wonder what is it still doing on the market, we will try to explain. We know that sales in Europe appear as writing error missing couple of zeroes, but they are true, and while US figures are much better they are still ridiculous compared to German rivals.

Yet we still insist that there is something special with this SUV and if even Infiniti forgot about it, obviously they suddenly remembered it as this year it received facelift, which would be more appropriate if it happened 5 or 6 years ago. Anyway, we are where we are, and here is the review of 2017 Infiniti QX50. 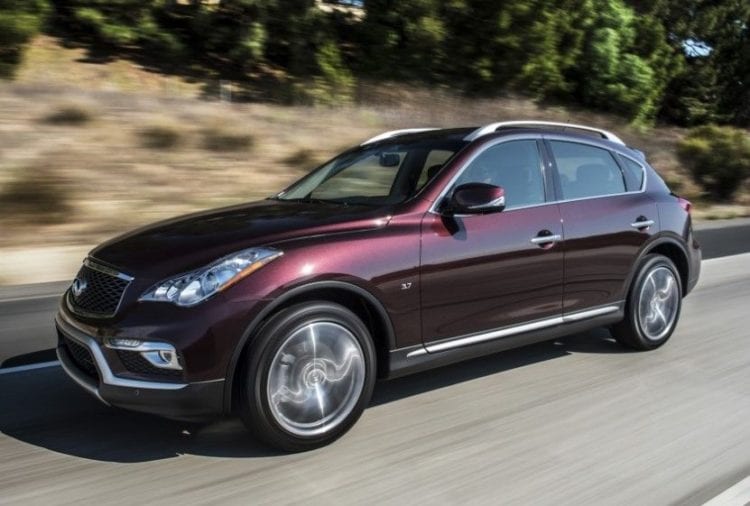 In 2013 EX became QX50, but visually nothing changed, which was a shock considering time already spent on the market. Fast forward to 2016, and after a decade of introduction, we finally see some changes, trying to freshen up incredibly old model. Did they succeed? Well, yes! The secret is in its shape. It looks as coupe SUV with very seductive tail, making it incredibly handsome in a world of bulky, clumsy looking rivals.

The same mold used, many years after, Porche Macan and can you imagine it looking outdated in 6-7 years? Probably not. Refresh brought more modern looking bumpers and meshed grille, and it is not nearly sufficient to make it up to date if it’s not due to its gorgeous figure.

This is the area where a decade-long lifespan could create laughing reactions when reviewed in present days. Refresh brought nothing styling wise, and we stay by our words when we say that it can still stand proudly between rivals. Take a look at it by yourself and try to disagree with its visual complexity, an abundance of luxury and lavishness of materials used, which successfully covers outdated flows.

When introduced in 2007 cabin was ahead of its time, so these days it is still a feast for our eyes. Standard equipment includes leather, so it’s impossible to encounter one of these looking poorly stripped as same as some German could appear without extras. The main problem was a lack of space, and it was resolved by the addition of four inches, so finally, it has interior space worthy of mid-size SUV. On the downside, compared to German premium rivals it lacks in build quality and the noise level is a little bit over the line.

Under the bonnet is still 3.7-liter V6 delivering 325 hp and 267 lb-ft of torque, making 0-60 run in segment respectable 6.7 seconds. The same engine is offered in Nissan 370Z, and it’s kind of old school these days. You need to push it hard for it to return a proper kick and it makes quite a noise. This powerplant comes paired with 7-speed automatic, which makes quick shifts but sadly it lack paddles at the wheel for manual control.

QX also shares the platform with 370Z, and it rides as much as it can as its donor but in SUV body. That means it rides sublime, quick, sharp, nimble and highly responsive, while hydraulic steering offers feedback that modern electric ones could just dream about, so rare plus for old technology. Its age is felt in fuel efficiency area as 20 mpg combined is definitely behind rival offers.

It is very hard to convince anybody that decade old car still has something to offer. Its age is best seen in the technology area, where 2017 Infiniti QX50 lack some usual features like power tailgate and ventilated seats. Also, the resolution on infotainment screen is visibly outdated, and clearly some of its features are too.

Yet, this thing got the gorgeous shape, it drives like a sedan, and the cabin is coated in ultimate visual luxury. The only thing that could be the magnet towards this vehicle and advantage over the competition is its price. The base model starts at $35,645 while one of its competitors Porsche Macan goes from $10k more.