Infinity came to life as a result of Nissan’s progressive thinking. It entered US market in 1989, following Honda’s move with Acura three years before and interestingly that was the same year when Toyota had the same idea with Lexus. Infiniti is currently lagging behind Acura, let alone Lexus in US sales, but it is undeniably recognized brand with its part of the market share.

After the US it was logical for Japanese to turn their attention to Europe and they did in 2008 with arriving on the old continent. Sales are rather symbolic at the moment but they are steadily raising and the introduction of new models is definitely going to improve the picture. Battling German premium trio in their well established traditional segments is tricky, so QX30 could prove as a smart move for Japanese since neither of German brands has been long present in compact SUV segment. The model that are we going to talk about is a special one so let’s see what 2017 Infiniti QX30 Sport has packed against praised rivals. 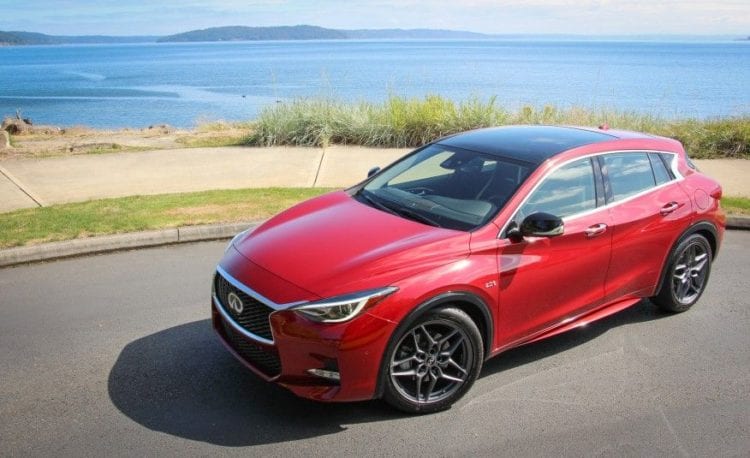 The name suggests that it should be a sportier version of the regular model and new styling cues are present to confirm that. The front fascia is evidently more aggressive with meshed grille spilling over the lower part of the bumper and much sharper curves around fog lights. From the side, there is a new design of alloy wheels and size is increased from 18 to 19 inches. At the rear, we have a similar story as to the front, with totally revised lower part of the bumper that offers centerpiece decorated with black mesh and darkened area around exhaust pipes.

Interestingly Sport model is 0.8-inches lower than regular making it more aggressive even in its stance. Everything mentioned makes this version much more amusing to look at than regular one.

Infiniti hasn’t stopped on the exterior, so the interior has some neat touches too. Seats are beautifully shaped in a sporty manner, resembling ones in Merc’s A45 AMG, the steering wheel is flat-bottomed and there is a lot of contrast stitching to complete the overall sense of sportiness. Since QX30 is based on Merc’s GLA it shares same flaws in the cabin area, so the space at the back is limited, back seats are awkwardly positioned, and the boot is rather small.

There are also some lower parts treated with cheaper plastic, but an overall sense of refinement is decent, especially for Infiniti.

This is the strange part. As we saw, so far Infiniti has done a proper job in making Sport version more distinct and superior than the standard one, but it seems that it lost all enthusiasm before reaching this area. At least it seems like that only on first glance, with which you will see that engine is unchanged, 2.0-liter turbocharged I4 delivering 208 hp, not even one more hp than the regular model.

Don’t be disappointed now, the model in question is almost 200 pounds lighter by opting for FWD rather than AWD, it is quicker to 60 mph by about half a second, it can remarkably endure 0.90 of lateral G-force, and it stops from 70 mph in 6 feet less than the regular version. You have to agree that despite unchanged power figure on the paper, everything stated is more than enough to justify its Sport designation when compared to its conventional sibling.

Despite borrowing powerplant from Germans, Japanese hasn’t been lazy, so they managed to special tune and tweak every bit that allowed changes and the overall result is quite satisfying with lively and vigorous behavior on the road. 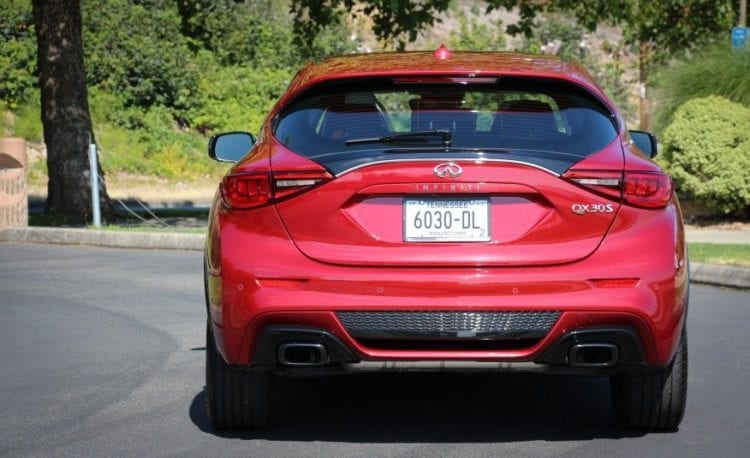 2017 Infiniti QX30 Sport arrogantly ask for additional $8,550, which is appear as quite a number only to justify name extension. Yes, the engine is the same, but everything else is different. It is much more hostile looking, in a positive manner of course, and it rides so much better and quicker than the traditional offer. Anyway, all those premium offers in compact SUV segment are generally hefty priced from the start, so why not stretch a little bit more for something more intriguing in the first place.