When one door closes, another one opens. The death of the enthusiasts’ beloved Q50 Eau Rouge concept is a big tragedy but what will emerge from this? Our dreams of a GT-R powered sedan will have to wait for another day, but for now, at least, there’s some redemption from Infiniti in the form of the 2017 Infiniti Q60.

The Q60 is Infiniti’s answer to the luxury coupes from the famous German trio. It’s a direct rival for the BMW 4-Series, Mercedes C-class Coupe and Audi A5. Because Infiniti is Nissan’s luxury branch, if you expected engines and platforms to be similar to those of Nissan, you’d have guessed right. While this big luxury coupe is, in fact, its own stand-alone vehicle, much of its parts have been transferred over from a parent company. 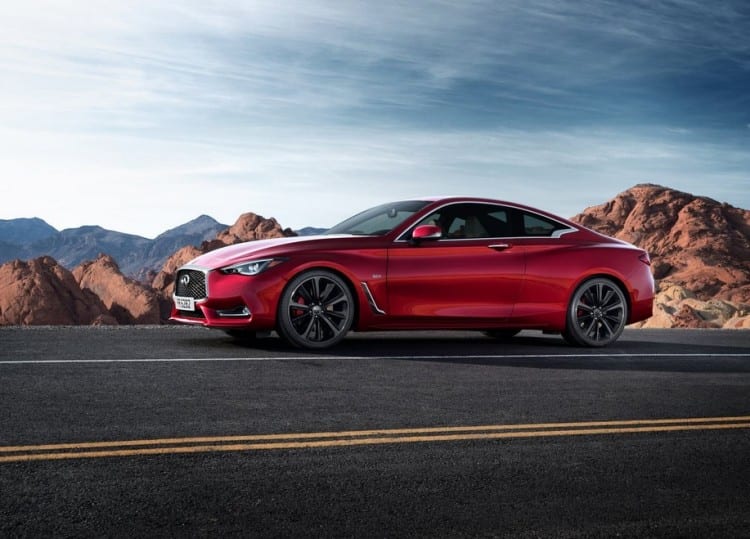 Just like its competitors, it offers a variety of four-cylinder and six-cylinder engines, suited to every potential customer’s needs and requirements. What you probably didn’t expect however is the Q60 to have almost the same four-cylinder engine as the one found in the C-class. Indeed, it may sound strange, but it’s actually a result of a partnership between Nissan-Renault and Daimler (Mercedes). These engines are built in Nissan’s power plant in Tennessee, and they develop 208 horsepower, nearly as much power as the ones in the Mercedes.

As much fun as a turbocharged four-cylinder is, unless economy and fuel efficiency is on your mind, it’s never going to be able to compete with the more powerful six-cylinder engine. Power aside, the noise the twin-turbocharged Nissan derived six-cylinder engine makes is nothing short of breathtaking. It’s a surging noise, refined yet just enough to excite you with all of the induction noise and turbo whoosh on tap. 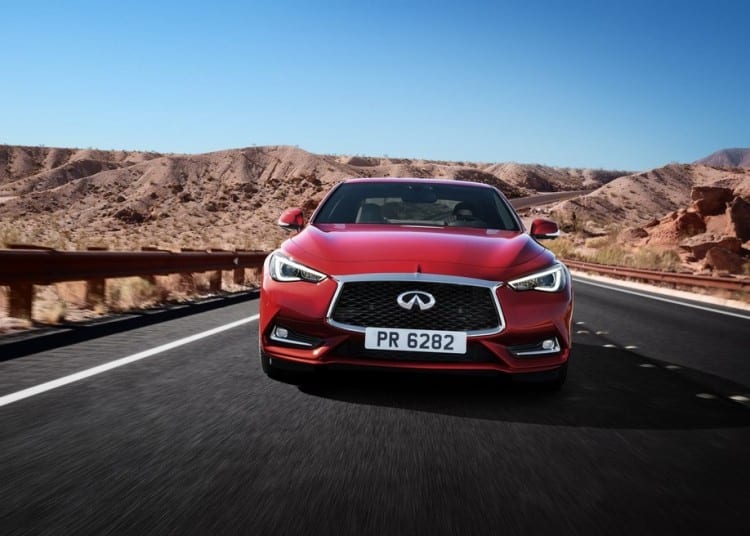 Two variants exist from the V6, both of which are entirely Nissan’s own product. They are in fact the same engine, just in a different tune. One develops 330 horsepower and the other 400 hp. For a car not aimed at the M4 or AMG versions of the C-class, this is a lot. Especially in a car primarily designed to be a soft and relaxing high-speed cruiser.
The 2017 Infiniti Q60 is based on the Q50, so it’s no surprise that power goes to the rear wheels unless you spec your car with the optional four-wheel drive system. Sadly, however, there’s no manual option and only a seven-speed automatic is available as standard. As smooth and refined as an automatic is, and as much as it suits the character of the car, having a manual version even for the few enthusiasts would have been great. We will see if Infiniti decides to add a manual offer to the lineup at a later date but at this point, this looks highly unlikely.

The Q50 is available as a hybrid, but since the new 2017 Infiniti Q60 is advertised as a sportier coupe, a hybrid feature isn’t available for the new model. This might turn a few people off from buying the Q60, but that’s why Infiniti has other models available as a hybrid. As of now, however, the Q60 is not one of them, and probably won’t ever be. 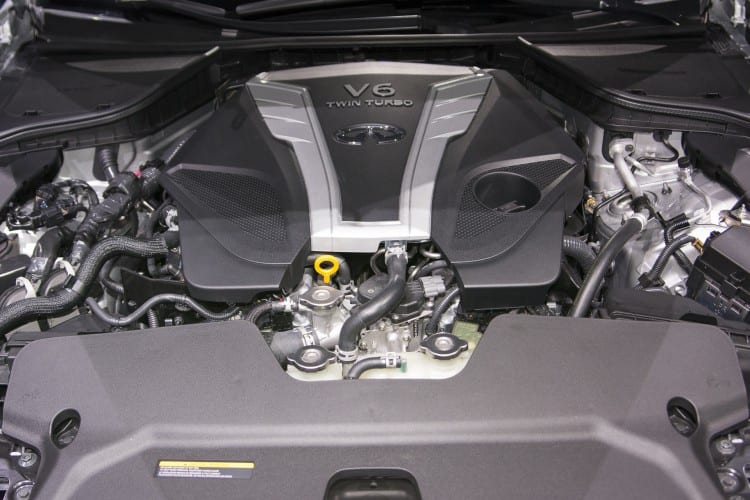 Finally, we’re getting into the car’s styling aspects. We’ll start off by complimenting Infiniti on the great styling design they’ve done. It’s rare to see a car so close to the original concept as much as the Q60 is. Quite often you get something that resembles the original design, but is really so constricted by financial issues and safety regulations that you end up with a car sort of looking like the concept. Not with the Q60. 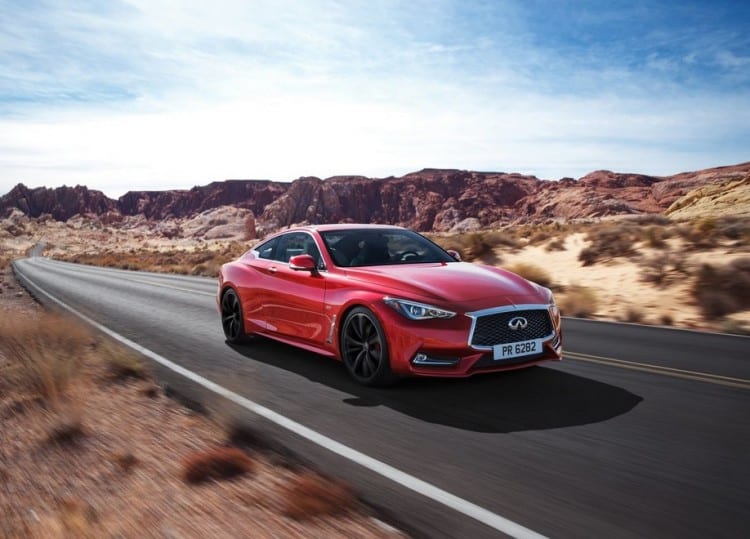 If you were searching for a luxury coupe, you often only had a choice of the already established coupes, mostly from Germany. Looks wise, we believe the 2017 Infiniti Q60 beats them in the styling department by a long shot. It may not be the most beautiful car ever designed, but in terms of presence and sheer jaw-dropping factor, it’s certainly up there with the best of them.

Compared to the outgoing version, the grille is much larger and now has a honeycomb design. The headlights are much more angular in appearance and give off an impression of a mean car, one that means business. The fog-lights follow the car’s lines and are better incorporated into the car’s design when compared to the old one, giving the car a more streamlined look.

Roof-line is more sloped and now seems to sort of melt into the rear of the car, giving off a distinct coupe impression from no matter what distance you look at it. The rear of the car is no different and has had a major update as well. Every crest and angle is much sharper, and the taillights have been tailored to match the front ones perfectly. Overall, it’s a very striking car, one that would provoke an immediate glance at it if it were to pass by you on the street. 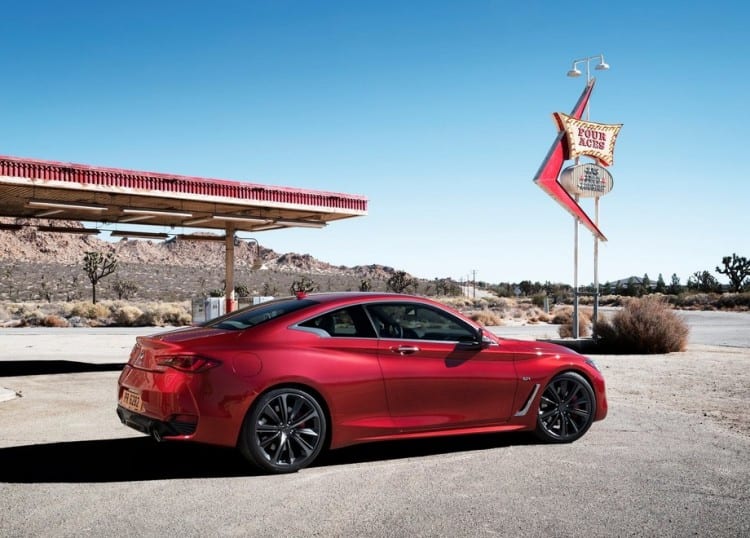 Inside, it’s business as usual. Everything you expect from an up-market company such as Infiniti, and then some. You can immediately tell that no expenses were spared when it comes to the interior, as soon as you enter the cabin you are gripped with its luxury and comfortability. With just one touch of a surface, it becomes apparent that every material you touch and feel was put there because it was the best option for the specific job at hand.

The steering wheel has been redesigned and is very pleasant to the touch, featuring even better-incorporated controls for the car’s infotainment system. Speaking of the infotainment system, the center console now has dual screens stacked on top of each other, with controls located on the sides of the bottom one. 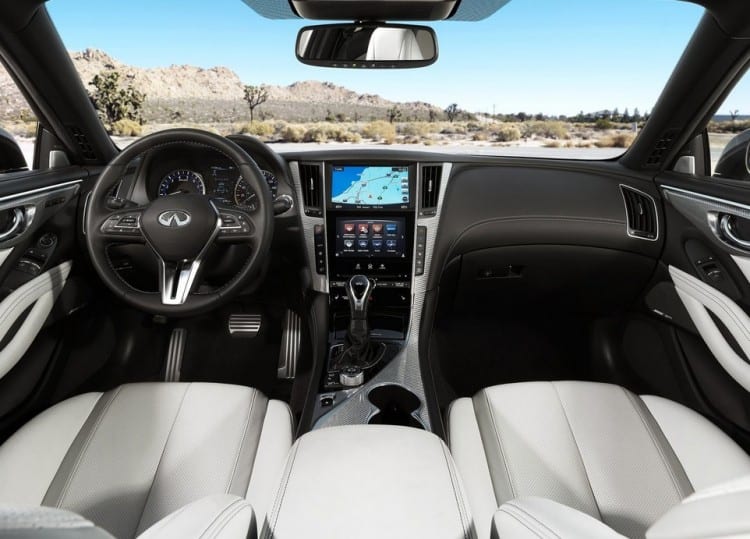 Infiniti did as promised. They delivered a new Q60 that meets nearly every expectation we had for it. Lots of people criticize the car’s looks for it not being too different from its counterparts. For the right people, however, it’s perfect. Lots of luxury, a great look, power, and speed, along with the premium Infiniti name. It should cost around $40.000, making it priced quite competitively to the other cars in its segment. Price is only a prediction and is delivered because the Q50 sedan is currently offered from $38,055 and we know that coupe will be slightly pricier. Whether you like it or not, it’s a definite step-up for Infiniti.