2017 Infiniti Q30 is not just an ordinary model for Infiniti because of two reasons. First, it used the platform of Mercedes-Benz instead of traditional Nissan, which is featured on most current Infiniti vehicles and second, it is the first luxury hatchback manufactured by the Japanese company.

Apparently, Infiniti decided to enhance the upcoming line-up even more by turning to German engineering, but the list of Mercedes sourced parts does not end there. In addition to the platform, Q30 received the new turbocharged engine from the Germans, which means that Infiniti really wants to win the segment over VW, BMW, Audi and likes. 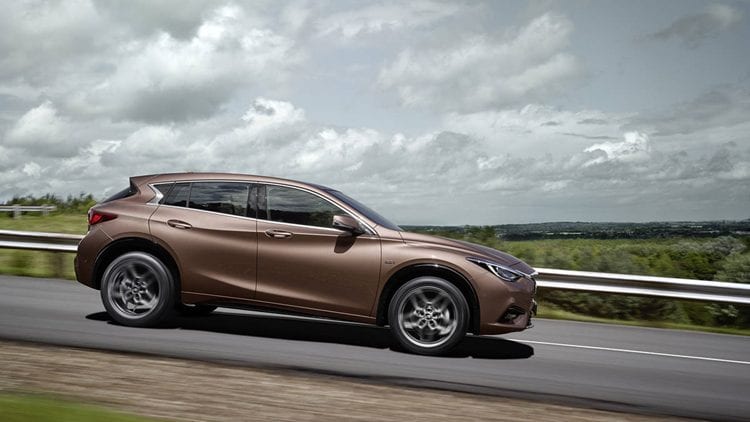 When the vehicle was first unveiled at the last year’s Frankfurt Motor Show, many viewers said it looked like a compact crossover. Indeed, there is no way we would object because Q30 looks to be the smallest crossover in its essence.

However, the small crossover has been given an important objective: Infiniti actually hopes that it will help to increase the sales volume and enhance the company’s reputation all around the world. Yes, it looks like they have some serious plans for expanding global presence and by looking at the current lineup, we think that there is a good chance for them to succeed. 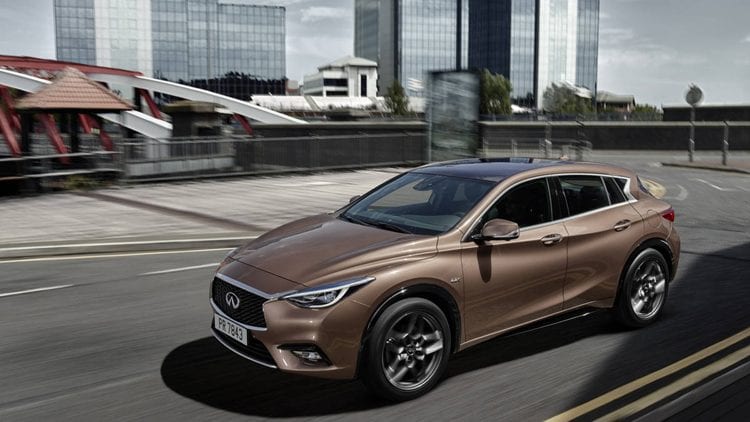 Does Q30 have enough to help to achieve this goal? Let’s find out.

Before making Q30, the Japanese company had two models shown in 2013 and 2015 at the same motor show in Frankfurt. Well, not exactly production models: they were QX30 Concept and Q30 Concept. Clearly, Infiniti has been developing Q30 for quite a while and wanted to be perfect in every possible detail, which is evident from the model’s exterior.

A quick comparison between the two concepts and 2017 Infiniti Q30 reveals that the latter one has received a lot of styling from the previous designs, including the basic shape with traditional branded elements: double-arch grille with a 3D-effect mesh. 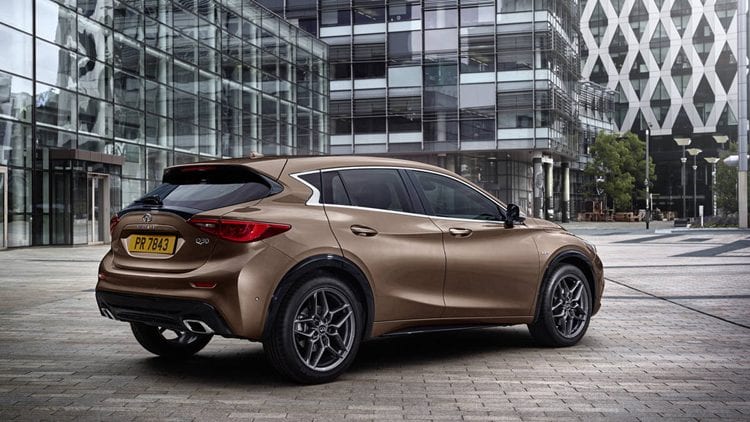 Given that we all are familiar with the design of earlier concepts let’s look for differences. First and foremost, the front bumper is different and does not jut out quite as far as it used to. Next, the headlights are different, and side skirts are less aggressive but still very good-looking, thus proving the claim of the manufacturer about “bold design, strong looks, and command setting.” Except for the side mirrors that became milder, the list of new elements ends.

Although the vehicle clearly looks similar to the previous concepts but only in slightly toned down version, it is still a great-looking exterior that is perfect for an urban explorer. We should also mention that the automaker wanted to send a clear message that we are getting Infiniti’s DNA is in every element of Q30 by including double-arch grille, crescent-shaped C-Pillar and dipping shoulder line that runs the entire length of the car.

According to Infiniti’s official website, inside of Q30, the shapes flow naturally in beautiful asymmetry. Although this layout was also carried out from the concepts, the model has more new elements if compared with the exterior.

The automaker says that Q30 was created to make a good first impression as soon as the driver opens the door, which is certainly true. The very first look reveals that the exterior is made from high-quality materials, including aluminum, wood, and leather, which are beautifully distributed throughout the interior. 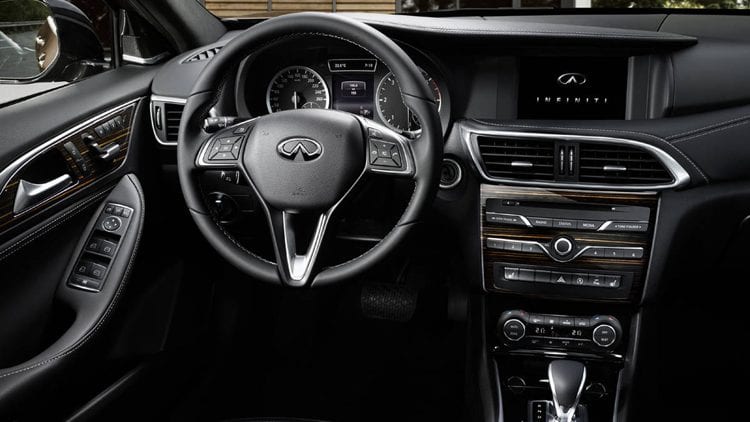 One thing that should be mentioned is the technology that was used in the interior for sound deadening. Infiniti claims to have used the latest innovative materials that significantly reduce noise, vibration, and harshness even on high speeds.

For example, the official page of the vehicle on the company’s website said the driver and passengers should be able to hold an understandable conversation while in motion and the use of new materials allowed being the best in this area among luxury hatchbacks.

Moreover, the designers have added the Active Noise Cancellation technology which uses the stereo to issue sound waves that counteract the noise produced by engine and road. Some of these elements we are used to seeing in high-level executive sedans, so it is clear that Infiniti wants to offer best possible experience. 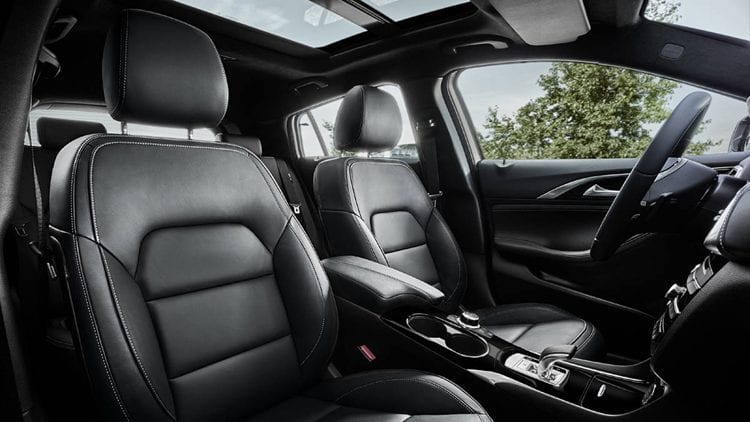 The seats of 2017 Infiniti Q30 are comfortable and made to match ideal occupant’s seating position and provide the best support. As an option, customers can select sports seats with some advanced functionality, such as power lumbar support and eight-way adjustability that allows finding ideal seating position.

Another feature that can certainly impress us is the Infiniti InTouch™ technology, which allows staying connected by texting, email, listening and managing music libraries, and making appointments in the calendar. It is integrated with Bluetooth connectivity, USB ports, and online search to make riding in Q30 a unique and pleasant experience.

Under the hood of this compact crossover or hatchback is a 2.0-liter four-cylinder gas engine that pumps out 208 horsepower and 258 lb-ft of torque. It allows reaching 60 miles per hour in about 6 seconds and has limited 155 mph top speed. 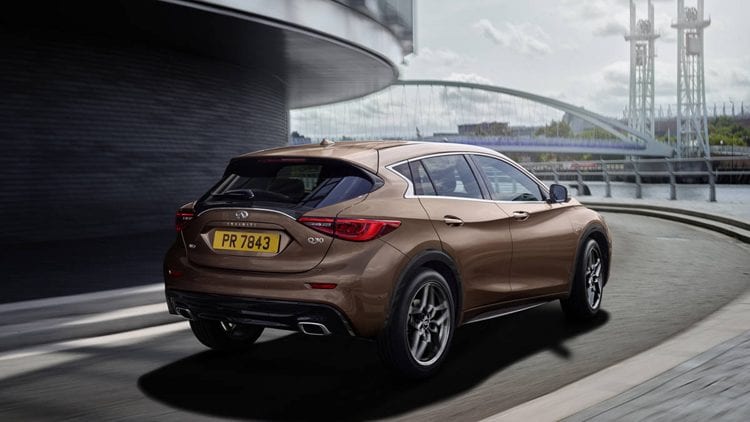 This engine will be coupled with a 7-speed, dual-clutch smart transmission that offers completely automatic gear changing or hand shifting. Moreover, the transmission can efficiently handle all power by intelligently pre-selecting both lower and higher gears before they even need to be engaged.

The list of available engines does not stop there and continues with 1.6-liter four-cylinder with 120 or 154 horsepower, 1.5-liter diesel with 107 horsepower and 2.2-liter 168 horsepower diesel. However, it should be noted that these engines will be most likely to be available only for European customers while the U.S. customers only get the most powerful unit mentioned here. 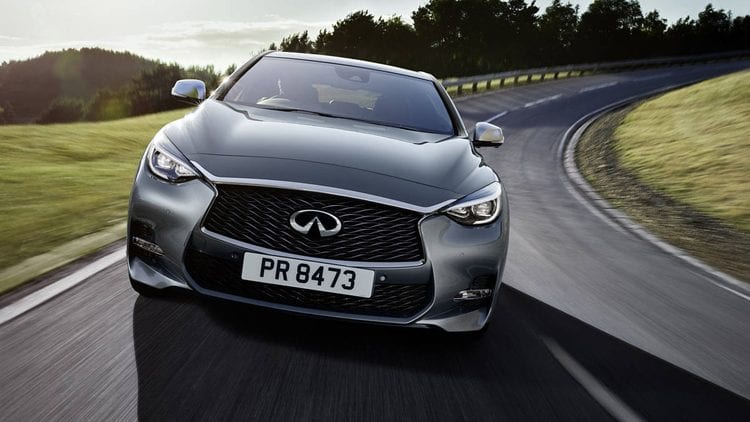 Unfortunately, Q30 has not yet been tested by the NHTSA to provide us with the crash test rankings. However, it is reasonable to expect top results because the vehicle comes packed with safety features, including automatic high beams, forward collision warning, blind spot warning, pedestrian detection, emergency braking assistant, intelligent cruise control, and parking assistant.

The official website still does not have the information about the price of 2017 Infiniti Q30 in the United States even though the model will be released later this year. However, we expect that it will start from around $30,000 there. In Europe, only prices for the United Kingdom market are known: £19,760 for gas engine model and £20,720 for diesel.