Hyundai is a brand which has gained a lot of recognition in previous years. They were always around, but they only gained in popularity in the U.S. during the last few years. Most of their previous models were basically affordable economy cars, which is probably why they didn’t catch on. With their updated range now, they’re ready to take any market head on.

Obviously, Hyundai has models in nearly every segment, but there is one where they’re lacking. While Audi has the Q3, Q5 and the Q7 and BMW has the X3, X5, and X6, if you want a crossover or an SUV from Hyundai, you’re only left with the Santa Fe. It’s always been a good choice but walking that thin line between a crossover and a much bigger SUV is always tricky. Hyundai realized the massive task the Santa Fe has to undertake so they very wisely decided to firstly add the two-row Santa Fe to the production line of the plant in Montgomery, but perhaps, more importantly, they announced that the Santa Fe would receive a midlife update, something that was very much needed. 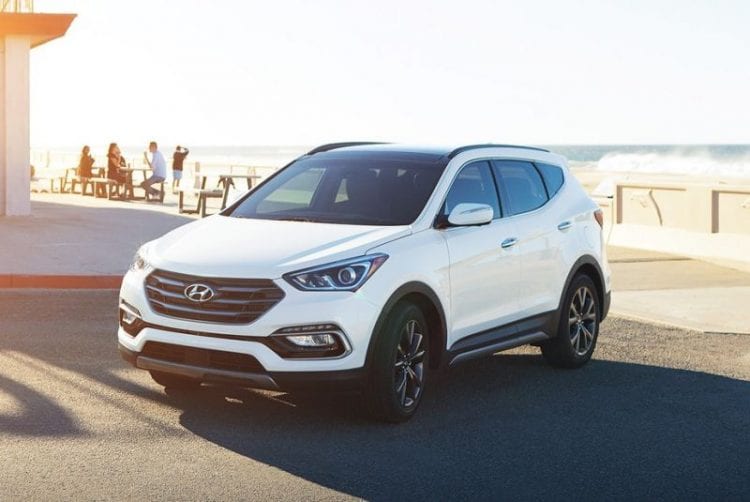 The very first Santa Fe was launched in 2001. It was Hyundai’s first attack at an SUV market, and it was reasonably successful for them. The second generation came five years later and brought significant improvements but undoubtedly the best generation is the current one which debuted in 2012. It brought the most important changes and really made the Santa Fe a competitor for its segment, not simply because it was more affordable but because it could go head to head with most rivals in a lot of areas. For 2017 Hyundai has introduced a new look, fresh interior and lots of technology updates to bring the Santa Fe that much closer.

The exterior is rather handsome. There are two versions from the Santa Fe on offer, the first one is a traditional two-row five-seater called the Santa Fe Sport (obviously), while the second one is the seven-seater three-row vehicle dubbed just the Santa Fe. Both have the same unique styling. The Santa Fe’s front fascia has upright fog lights and five grille slats while the Santa Fe Sport uses more traditional horizontal fog lights with three grille slats. Both are equally good looking, but those minimal changes and details make them recognizable to fans everywhere. A really nice touch by Hyundai there. 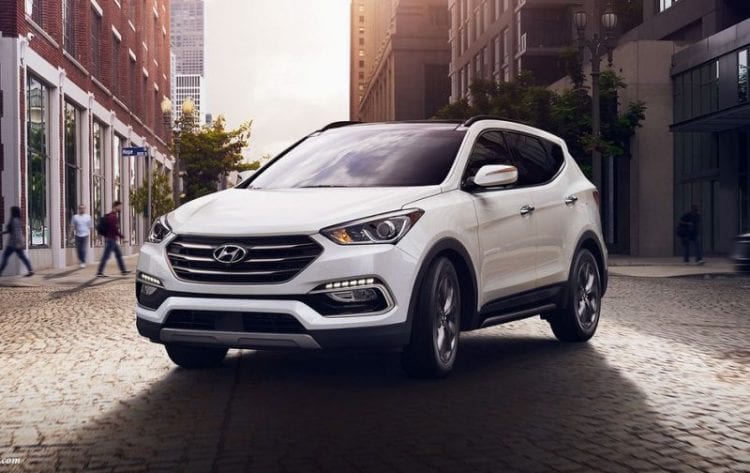 The refresh also means we get a new rear fascia. It’s not just a simple tweak either. The bumpers and the lines are just sharpened up, but there’s new taillights as well as dual exhaust outlets, really complimenting the Santa Fe’s new sporty look. The sides have a new rocker panel trim with silver accents while the side mirrors now come with a heating function as standard. There are also new wheels ranging in size from 17 to 19 inches. All of them are alloys and complement the modern and refined styling of the car.

The new headlights naturally get LED technology for the daytime running lights and the three-row Santa Fe can be even fitted with LED fog lamps. Much like in most new cars these days there’s automatic on/off function for the headlights. Finishing off the entire exterior update are two new color choices, namely the Nightfall Blue for the Sport version and the Storm Blue for the standard seven-seater Santa Fe. 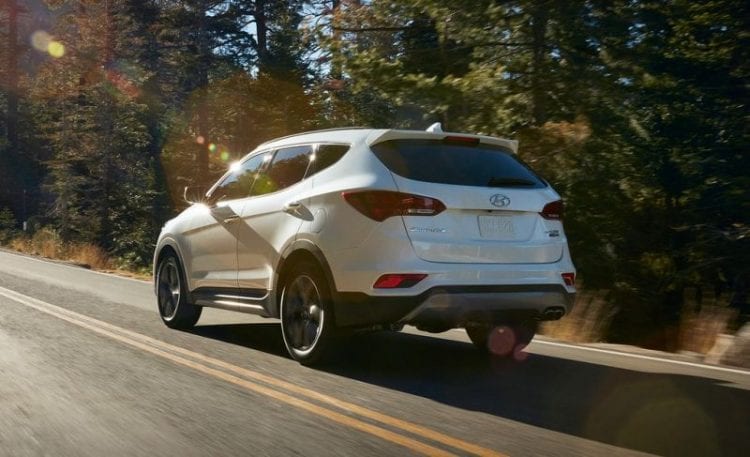 The inside brings significant changes too. For starters the center stack has been updated and has new button placement, completing the host of various other upgrades throughout the cabin. First on the list is the new 5.0-inch LCD screen which is standard and is used for controlling the audio system. Then there’s the 7.0-inch touchscreen which is a joy to work with. It’s coming with base Santa Fe but is an option on the Sport. There’s an 8.0-inch touchscreen optionally, and that one also includes the navigation. 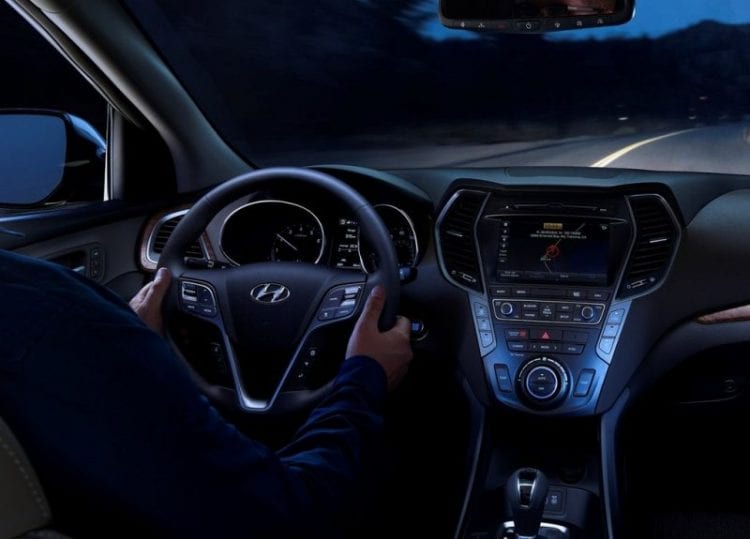 Both of these versions are compatible with Android applications such as Google Maps and are capable of streaming audio. There are over 40 different supported apps for all you technology enthusiasts out there. Note however that only smartphones with the Android 5.0 (dubbed Lollipop) or higher are compatible. The Infinity premium sound system ensures that the audio is at an all-time high with a staggering 12 speakers and the QuantumLogic Surround sound sure helps it too. Other features worth mentioning are the keyless entry, controls on the steering wheel and hands-free Bluetooth integration. 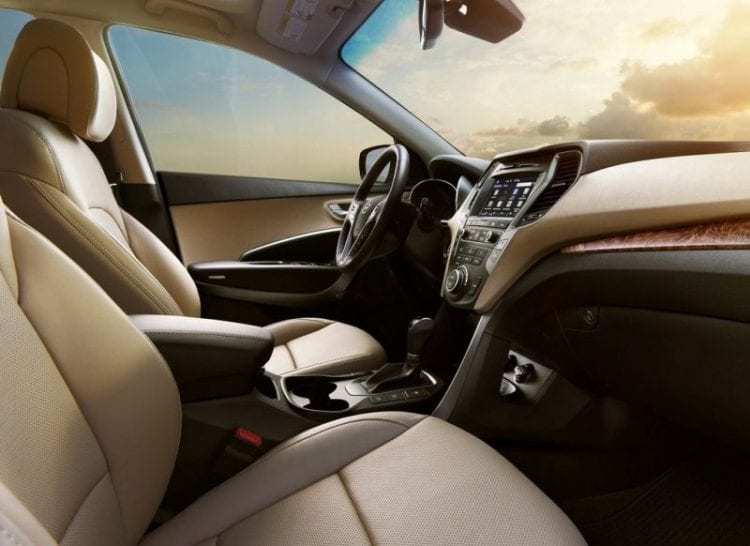 The Santa Fe Sport comes with two different engines. The starting 2.4-liter four-cylinder develops 185 hp, but the 2.0-liter four-cylinder with a turbocharger is capable of pumping out 240 hp. Therefore it is the one we would recommend. Both, come equipped with the latest tech and have direct injection and Dual CVVT.

The really interesting fact is the downgrade the engines have over the previous model’s units. They’re actually less powerful. The 2.4 unit drops five hp from the previous one’s 190 hp and the 2.0 liter loses a significant 24 hp as it was able to push 264 hp. Of course, you do get a tradeoff. Mostly resulting in more grunt way low down the rev range where it mostly matters, especially for city driving and overtaking. When was the last time you took your car to the rev limiter? Exactly, you don’t do it that often. Having that power lower in the rev range makes it a lot more usable for everyday driving. 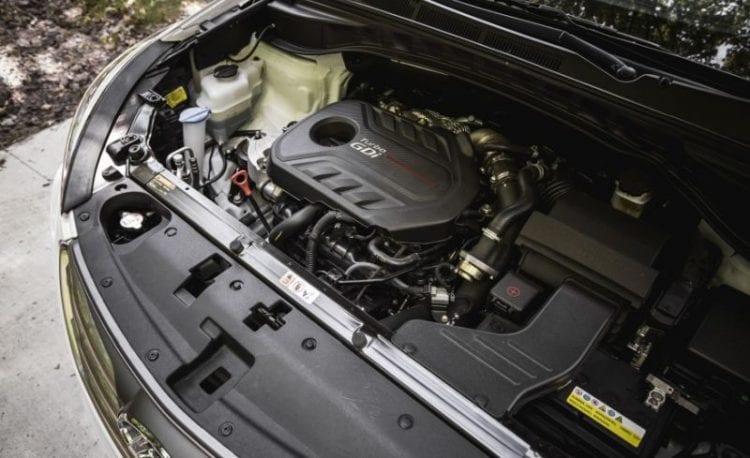 Larger, three-row Santa Fe gets a 3.3-liter V6 engine, the Lambda II. It’s good for 290 hp, and it certainly pulls a lot stronger than both the 2.4 and the 2.0 engines. Naturally, it gets worse fuel economy, returning 18/25 mpg for the city/highway respectively versus the 2.4’s 21/26 and the 2.0 turbocharged unit’s 20/26 mpg. The V6 is paired to a six-speed auto with Shiftronic, and we should mention that all models come as front-wheel drive vehicles as standard but can be fitted with an all-wheel drive system.

Prices for the Santa Fe start a very competitively priced $30,800. It’s not exactly cheap but for something of this caliber it’s extremely affordable. Make sure you test one out before buying it although we suspect you won’t find any flaws.