As the race for the best green technologies intensifies, we see more and more hybrid vehicles entering the international market, carrying an even more impressive payload of electric capabilities than ever before. However, there is one reasonable question that a car manufacturer should ask before making its first hybrid: should it be hybrid, plug-in hybrid, or pure electric? Obviously, the designs of these powertrains are significantly different and the choice has to be made carefully. Some decided to start with hybrids while others launched with plug-in hybrids combined with gas-powered models. Hyundai decided to take another road and offered a surprisingly simple solution: manufacturing all three “green” powertrains.

This brave initiative has been implemented with the new model Ioniq. It has been demonstrated to the customers in Korea and Europe in 2015 and finally arrived in North America just in time for the 2016 New York Auto Show. First and foremost, it is necessary to underline that Ioniq is the Hyundai’s first dedicated green car, just like Prius is to Toyota. 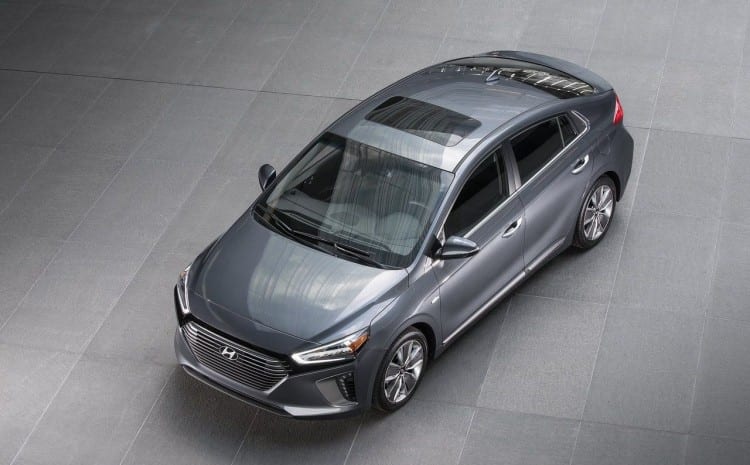 What that means is that it has been created specifically to be a hybrid vehicle without previous all-gas models. In addition to the full green base, this vehicle will be manufactured as plug-in hybrid and hybrid, which means that the Korean manufacturer aims to conquer its fair share of the market and create reasonable competition for Toyota Prius, Chevrolet Volt, and other green vehicles.

Some of the characteristics of the three models are similar. For example, the hybrid and plug-in hybrid models are going to use the same powertrain: Kappa 1.6-liter engine with direct injection. It is helped out with an electric motor and paired with an automatic six-speed transmission. In charge of powering of this motor is a lithium-ion battery, which became a standard for all new hybrid vehicles. The powertrain of the Ioniq hybrid is estimated to produce as much as 139 horsepower and 109 ft of torque. 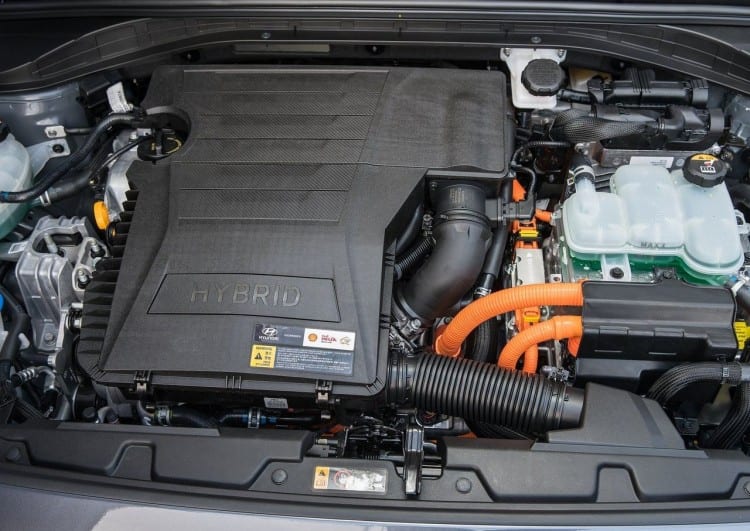 As for the plug-in hybrid version, the company still has not announced the maximum output but it is fair to suggest that it will be higher than 139 because of the more powerful electric unit. According to Hyundai’s statement, Ioniq plug-in hybrid should deliver at least twenty-five miles of range on the electric motor. This is a pretty impressive indicator, considering that the latest Prius plug-in hybrid is thought to cover only twenty-two miles, which gives Ioniq a slight competitive edge.

The all-electric model also has some impressive characteristics. For example, it features single electric motor which is estimated to deliver at least 120 horsepower. In turn, this unit is going to be powered by a 28 kilowatt-hour lithium ion battery. One of the things that many will not like is the top speed that has been estimated to be only 75 miles per hour, this is enough for all roads, even highway but still we would like to see a slightly higher number. The performance of the Ioniq Electric on a single charge cycle is also pretty reasonable: up to 110 miles, at least in the city.

Since it drives on a single-speed direct-drive gear there is no transmission meaning that it saves weight and that the floor can be completely flat. The Ioniq comes with the 100-kW charging unit and the vehicle could be charged in two ways: first, it is possible to do it through the charging unit and second, a simple household socket can be of assistance, too. However, the first respective charging method is much more efficient: the charger rejuvenates the battery to 80 percent in less than 30 minutes while when using a standard household socket for charging you will need from two up to eight hours depending on the charger setup you have.

The Ioniq shares the same platform with some of the latest Hyundai models, but also with Kia Niro for which platform has been developed in cooperation with Hyundai, this is also a hybrid vehicle, aimed to help to strengthen the company’s position in the green segment. At this moment, Kia only provided a limited amount of information’s about the platform but what we heard was really impressive. For example, it is made from a lightweight but super-strong aluminum and high-strength steel which contribute to better safety but also give the vehicle lower overall weight plus good aerodynamics pack. Similar to Niro’s, Ioniq’s body was shaped to provide the best possible aerodynamic performance and recognizable look. All the models will be equipped with low-rolling-resistance tires on a wide variety of wheel options, including 15, 16, and 17-inches.

However, there are some differences between the three versions of this vehicle in terms of the exterior. First and foremost, they can be recognized by different front-end designs: the EV is equipped with a copper-colored character line and does not feature an open grille, which was considered as unnecessary given that the vehicle does not have an engine radiator. Also, at the back there are no exhaust endings for EV, on top of this, only a few small badges will give you an insight which version is rolling.

All green innovations aside, Ioniq is pretty much a traditional commuter vehicle with a lot of conventional features. Specifically, it is equipped with a wireless charging pad, 7-inch touch screen, and the integration systems for Android and Apple smartphones. The cabin provides a reasonable amount of storage space as well: with rear seats folded, the vehicle’s cargo space is estimated at slightly more than 26 cubic feet. 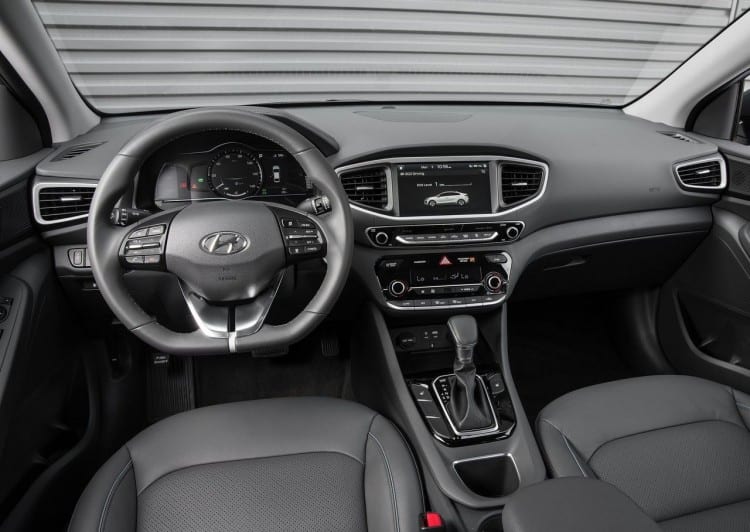 The electric Ioniq’s drive mode will be selected through push buttons and the other models will feature console-mounted shifters. The list of safety features is also pretty standard but still remarkable: autonomous braking, lane departure warning system, blind spot monitoring system, tire pressure control unit and adaptive cruise control are just some of the features you will see here. These features undoubtedly contribute to a considerably higher safety level of the vehicle.

What should we expect?

Although Hyundai did not make a direct statement about the plans to conquer the hybrid segment, it is clear that they want to get the Toyota’s position as soon as possible, or, at least, to come close. These plans are supported by the fact that Hyundai is developing more than ten models of hybrids, EVs, and plug-in hybrids by early 2020s. Therefore, Ioniq plays a significant role in getting the company where it wants to be because it sets the stage for the next models. 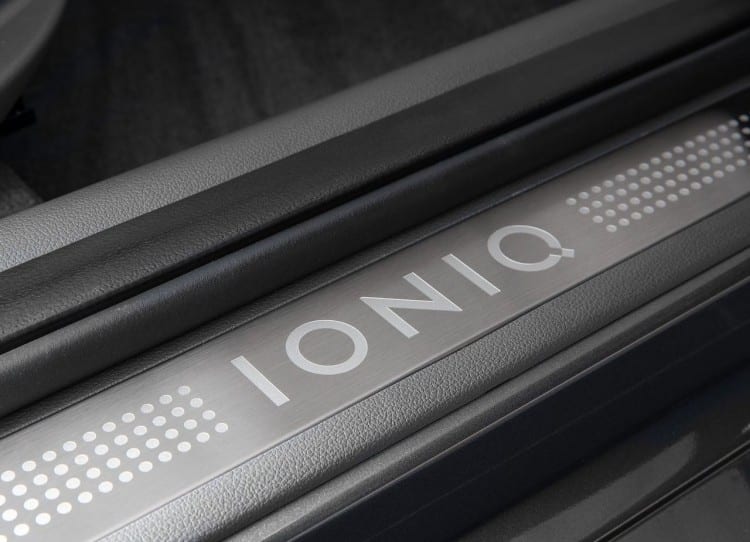 Despite the majority of specifications for this model have not been released yet, as well as pricing policy, it is fair to suggest that Prius will have a tough competitor to beat when Ioniq becomes available. This will most likely happen in the next few months from now. What is known about this model is certainly impressive so let’s wait a little bit to see what Ioniq has to offer.